PHILADELPHIA — Hamburg's Kate Miller likens it to the sickness of a loved one. Before the diagnosis and even after it, you have happy times. You create memories. You do good. You have challenges, but you also have hope.

That hope even creeps in as the diagnosis turns grave and you know the end is near. Logically, you know the worst is imminent.

“And when it happens, it hits you right here,” Miller said, poking her finger in the center of her forehead just above the eyes.

She’s talking about the Bernie Sanders campaign, which took its final breath last night here when delegates at the Democratic National Convention officially voted in Hillary Clinton as the party’s presidential nominee.

Clinton may be the first woman to win a major party nomination, but that’s not the progress Sanders delegates were seeking. The Vermont senator’s delegates from across the country were already angry, especially in the wake of an email leak that suggests the DNC worked against Sanders. So when Clinton was officially named the nominee Tuesday night, and DNC staffers or volunteers started handing out “Hillary” stickers and signs, many Sanders delegates walked out. 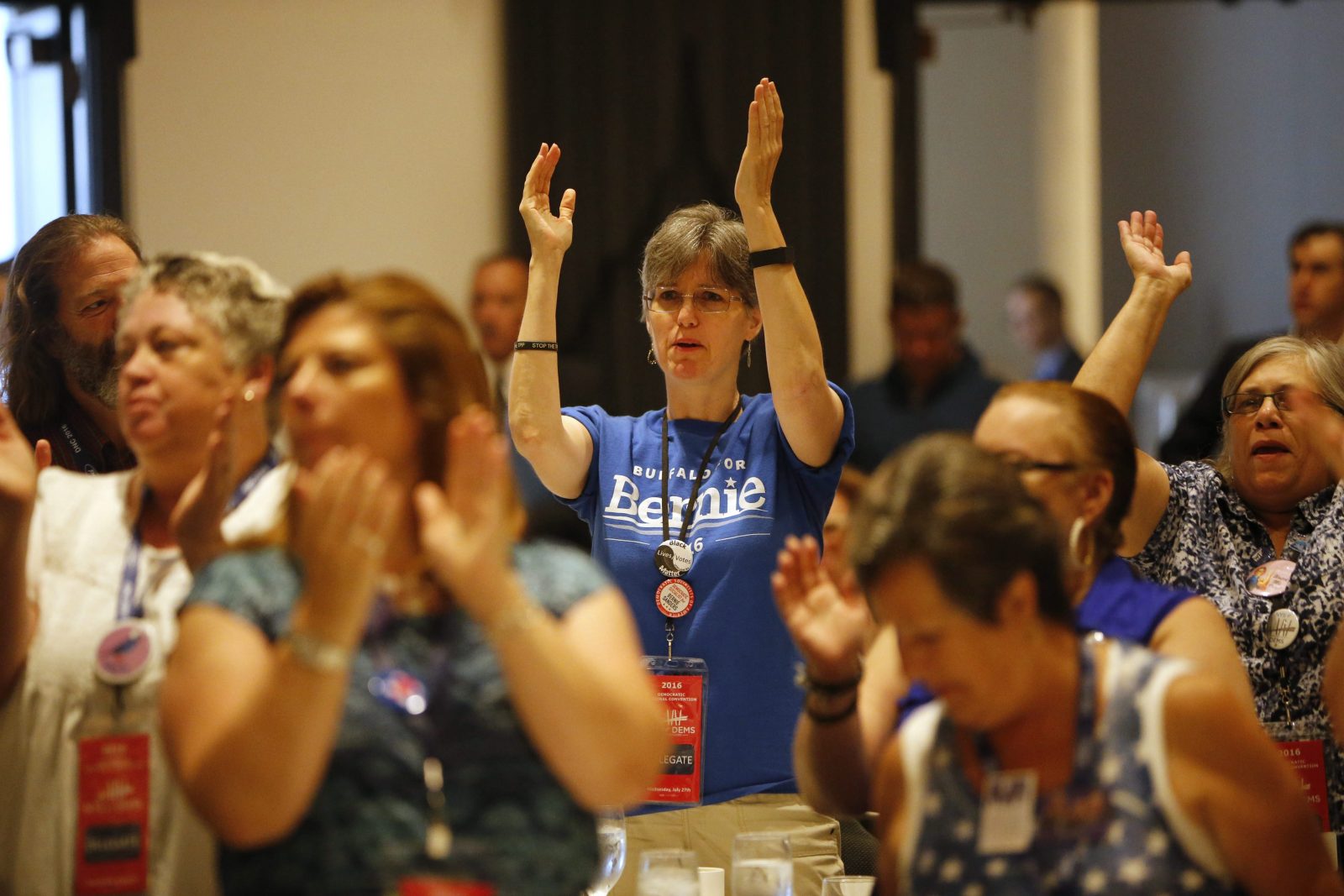 Bernie Sanders delegate Kate Miller, center in blue, applauds during a Sen. Charles Schumer speech during a breakfast at the Loews Hotel in Philadelphia on July 27. (Derek Gee/Buffalo News)

Some crashed the media tent outside the Wells Fargo Center, where the convention is taking place inside a highly secure perimeter, and gave interviews.

Others left the entire complex and joined protesters in nearby FDR Park.

Most members of the Western New York Sanders delegation left the arena. Though, as four of the six Buffalo-area delegates told me in a post-breakfast conversation Wednesday morning, it largely wasn’t in a planned or demonstrative way.

[RELATED: In Philadelphia, a front-row seat to what 'democracy' looks like]

After Sanders conceded to Clinton, they simply felt like they had nothing else to do. Except, perhaps, cheer on Clinton — and it was too soon. So they waited around 15 or 20 minutes, then most of them left, checked out the protests outside and headed back to their hotel.

“Once he makes that decision for the whole audience, you just sit there and you’re like, ‘I don’t know that I can have another sign put in my hand,’ ” said Chuck Hess of Arcade. “It’s just what it is when you’re sitting there: ‘I can’t be here anymore.’ It’s not any slight to the candidates.” 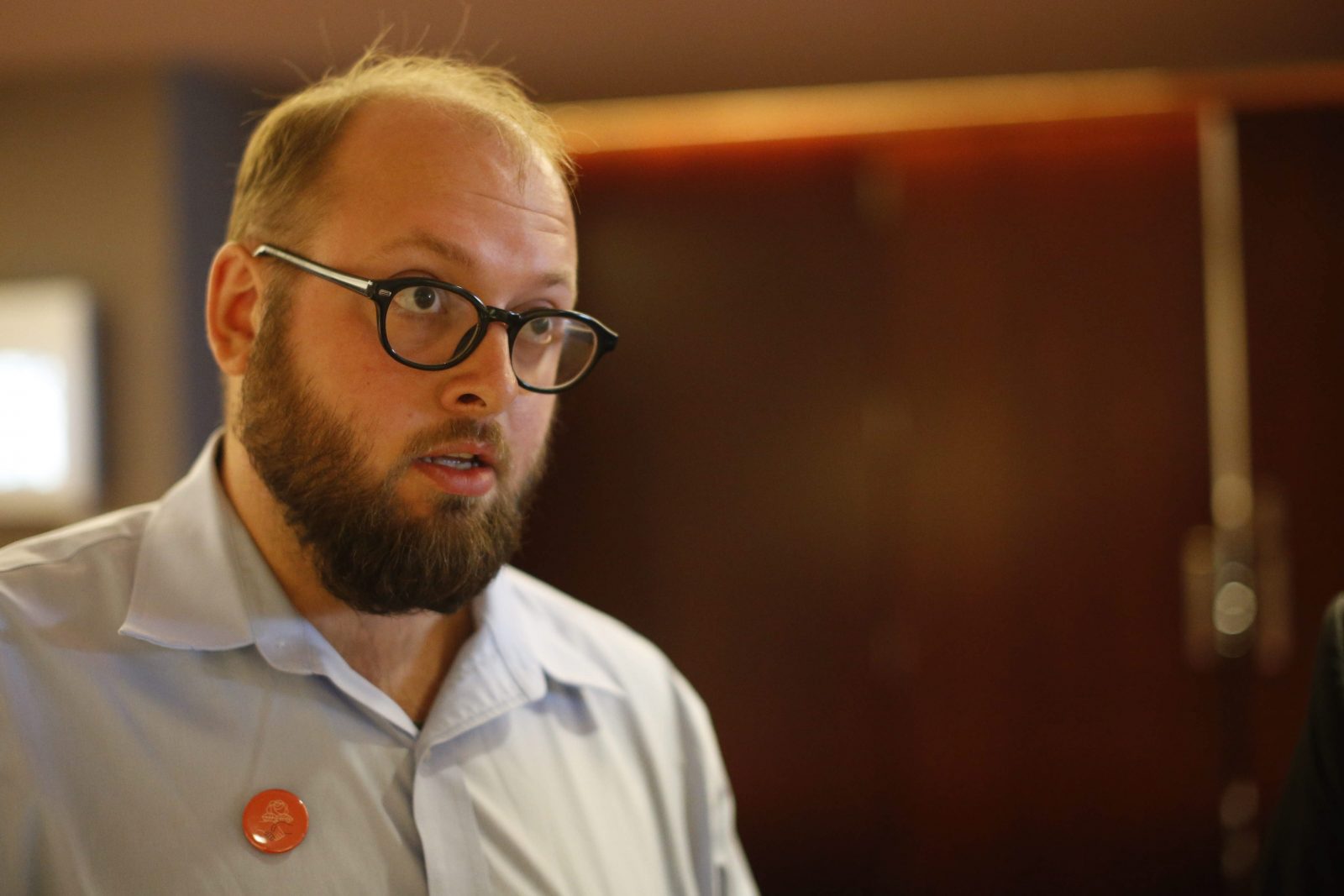 To point: Brian Nowak, one of the leaders of the Buffalo for Bernie coalition that worked on Sanders’ behalf leading into the April New York primary, told me he had the opportunity to help organize a “large-scale” walkout, but said no.

“It’s a matter of individual conscience,” he said, “and it’s not the best way to measure dissent. We lost a battle.”

Kate Eskew, another delegate from Hamburg, nodded in agreement. “Bernie didn’t want us doing that.”

He did not. Sanders has been actively encouraging his supporters to vote for Clinton in an effort to defeat Republican nominee Donald Trump, whom Sanders described in a Tuesday morning speech to New York delegates as “a demagogue that does not respect or understand the Constitution.”

But what’s strikingly apparent here in Philadelphia is that Sanders has created a being that has a brain of its own. His campaign mobilized millions of left-leaning, working-class people who, even before the DNC, have been making plans to continue the movement. One example: Sanders supporters are behind an effort called Brand New Congress, which aims to run a progressive, Bernie-inspired candidate in all 435 congressional districts in 2018.

Largely, Sanders supporters aren’t happy with his embrace of Clinton, even as he’s been able to push elements of his platform onto the mainstream Democratic priority list. As I’ve spent the last few days chatting with protesters outside the convention, a common theme has emerged: They understand why he’s supporting Clinton, but they’re not necessarily willing to follow him.

Kate Sherman, a 31-year-old from Portland, Ore., whom I met on a march, captured it well. “I was initially really upset and felt betrayed,” she told me, “but someone I was talking to earlier kind of made a more logical argument for me: They really have faith in Bernie that he thinks he’s doing what’s best for all of us in the movement, but it doesn’t mean we have to agree.”

That’s a widespread sentiment, and it has implications: First, the Green Party candidate for president – Dr. Jill Stein – is a rock star in Philadelphia. She’s been here all week marching with protesters and talking up the party’s left-leaning platform. Her fans are carrying signs in protests with messages like “Bernie or Jill, not Hill!” When you ask a Sanders delegate whom they’re considering supporting in November, you very well may hear Stein’s name, despite Sanders’ implicit warning that supporting a third-party could create a President Trump.

Here’s the other implication, one that’s apparent here and now at the grassroots: As Clinton delegates celebrate her long-awaited nomination, the Bernie or Bust people are bursting with anger. That’s in part true of the delegates, but they at least have a tiny voice; here, they can get in the same room as chairmen and congressmen and senators. Everyone else, though, is on the asphalt and the grass, picketing and marching.

The Buffalo Bernie delegation plans to spend these last two days here listening. They no longer have official duties as delegates, and while they’re able to go to the convention, they’re also free to spend time on the outside, talking to the people who are waiting to be heard.

“It’s bridge-building,” said Nowak, who plans to spend late Wednesday afternoon listening to the stories and concerns of protesters outside the convention. 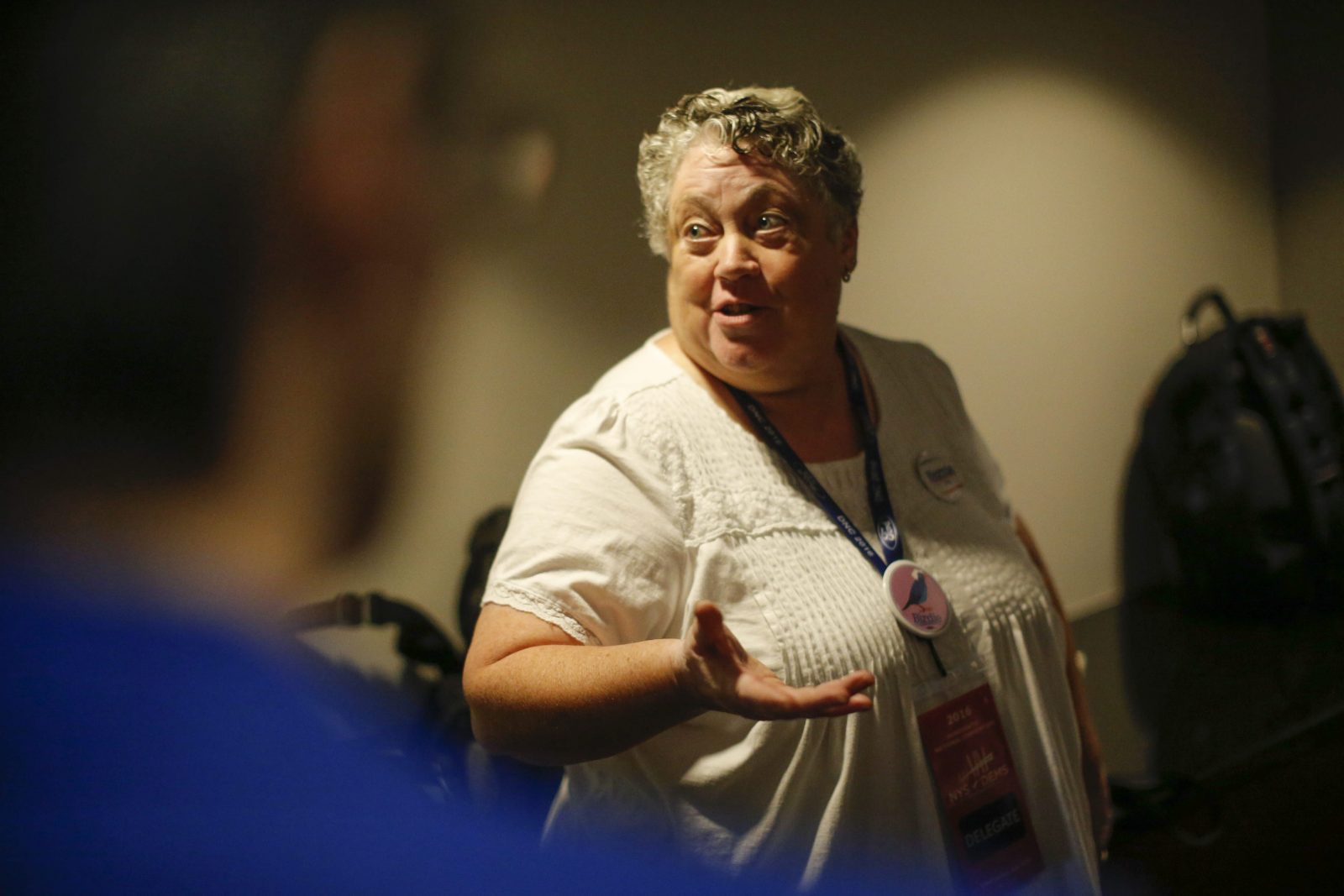 Kate Eskew of Orchard Park was one of the Bernie Sanders delegates who walked out of the convention early after Hillary Clinton's nomination. (Derek Gee/Buffalo News)

“I was thinking the same thing,” said Kate Eskew, a delegate from Orchard Park, who’s planning to use her delegate access to attend caucus meetings, including one for people with disabilities.

“This is a real opportunity for the Democratic party as a whole to bring in new, energized, committed people,” Eskew said. “The ball is really in their court.”

Nowak, a political activist in Buffalo and campaign manager for Mark Sacha’s Erie County district attorney campaign, is also planning to connect with lawmakers. He wants to bring the messages he hears from the protesters.

“Those people are in the park are fueled with rage, because the existing political institutions aren’t recognizing them in their humanity,” he said. “They’re not giving them a voice to register dissent. They look at these kind of demonstrations as children bitching and whining, and that’s not what it is.”

“Yeah, angry toddlers,” said Miller, nodding her agreement. “And we are not.”