PHILADELPHIA – Shawn D. Hogan, whose family has long been immersed in Western New York politics, turned introspective Tuesday amid the raucous scene in Wells Fargo Center as, for the first time ever, a woman won a major American political party’s presidential nomination.

Hogan, the chairman of the Steuben County Democratic Committee and mayor of Hornell for more than two decades, said he would cast his votes for Hillary Clinton in honor of his 95-year-old mother.

“I’ve seen many historical events in my lifetime, including the election of an African-American president,” he said. “But I’m honored and thrilled to be here for this, and so is my mother about me being here. She probably never thought she would live to see this.”

That kind of sentiment dominated not only the New York delegation directly under the podium, but most of the crowd in the arena as well. When Gov. Andrew M. Cuomo cast New York’s vote for Clinton, and her primary rival Bernie Sanders moved to make the vote unanimous by acclimation, the thousands of people attending the convention knew they had been part of history.

And despite a smattering of protests, the vast majority celebrated the historic moment. The roar thundering through the arena must have rivaled anything ever experienced during a Flyers playoff game.

Assemblywoman Crystal D. Peoples-Stokes of Buffalo, attending her fourth convention, said she is always optimistic about American politics. She could not help but note, however, the election of the nation’s first black president and nomination of the first woman presidential candidate by Democrats in just eight years.

“What I have seen in these four conventions has transformed America into the diverse society it should be,” she said.

As Baltimore Mayor Stephanie Rawlings-Blake presided over the vote, cheering for Vermont’s Sanders never ceased as totals were added for him. But the numbers – as everyone in the house knew – were not there. The former secretary of state was near the nomination when Cuomo cast New York’s vote, with the majority going for Clinton.

The governor approached the microphone, as tradition has it in presidential roll call votes. There, he cited Seneca Falls as the birthplace of women’s rights, New York as the home of former President Bill Clinton and his wife, a former New York senator, and then he announced the state’s votes.

“It was fun, it was great for New York,” he told The Buffalo News on the convention floor. “We will now elect the first woman president in history, and it’s a moment for history.

“It’s a great moment for the state,” he added. 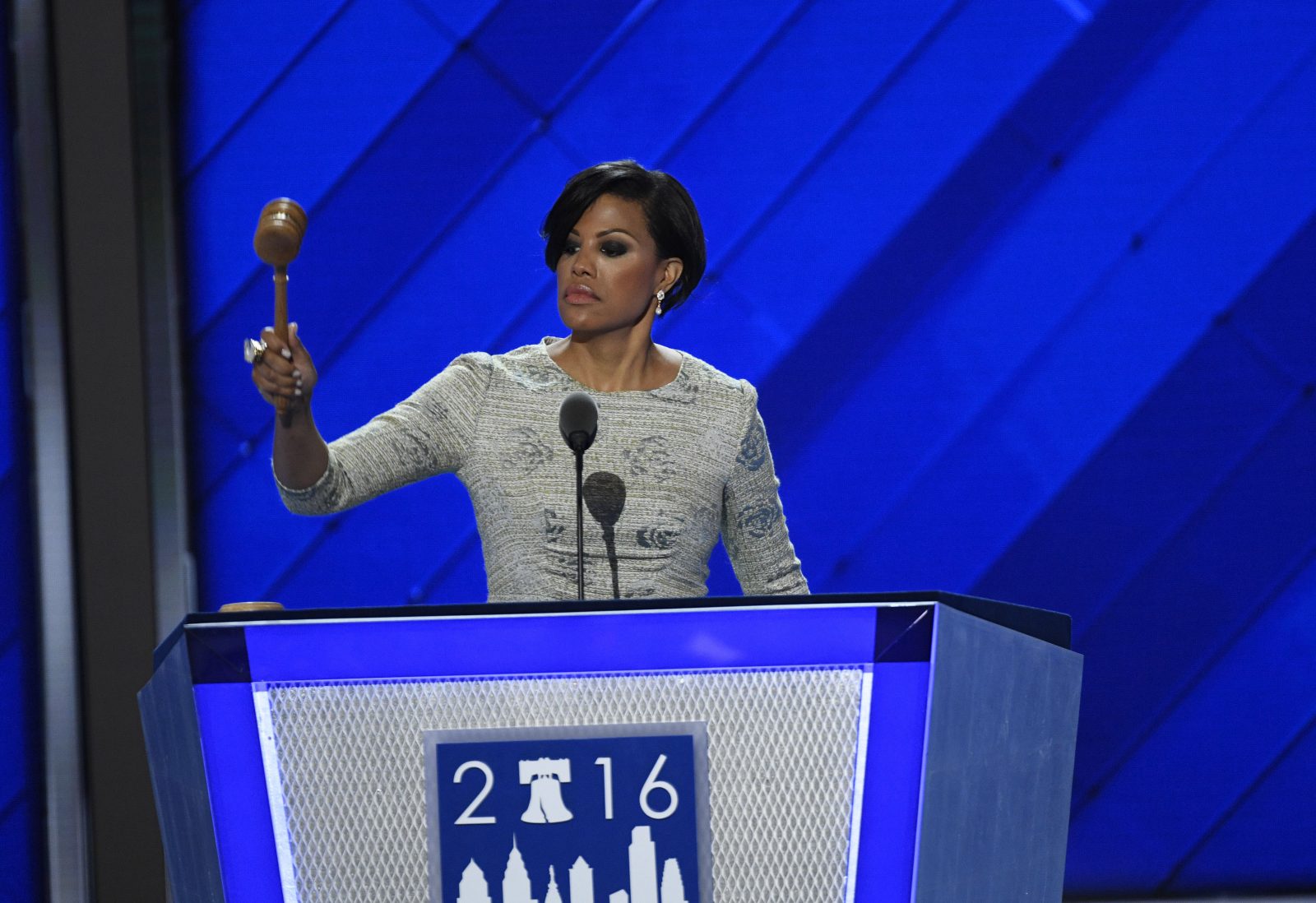 Clinton’s historic nomination did not enthrall everyone. Even though Sanders moved for the convention to nominate Clinton by voice vote – which the convention did, to scattered boos – an undetermined number of Sanders supporters walked out afterwards.

Brian Nowak, the founder of Buffalo for Bernie, was among them. “The fight we began at the ballot box needs to be taken to the streets with love,” Nowak said on Facebook.

Nina Subramanian, an at-large delegate from Buffalo, also left the arena with many other delegates from around the country, chanting: “Walkout.”

“I walked out because the legitimacy of the nomination is irreparably compromised,” said Subramanian, who earlier in the week harshly criticized the Democratic National Committee for favoring Clinton in the nomination progress, as leaked emails obtained by Wikileaks indicated.

By the end of the walkout, several hundred of the seats in Wells Fargo Center were empty. And while the walkout could not really be on television, the impromptu protests came clear at the media tent outside the arena.

Meantime, the pro-Clinton speeches continued inside the arena, with one of the most prominent members of the New York delegation – Sen. Charles E. Schumer – taking to the stage to praise the new nominee.

While the Republican candidate, Donald J. Trump, can only see an “angry America,” Schumer said Clinton offers a brighter vision.

“She sees an America where we don’t build walls, we break down barriers and shatter ceilings, a place where our differences make us stronger,” he said.

Schumer noted that he served for eight years in the Senate with Clinton and got to know her and trust her, and Lt. Gov. Kathy Hochul said she, too, has seen first hand the good work Clinton can do. 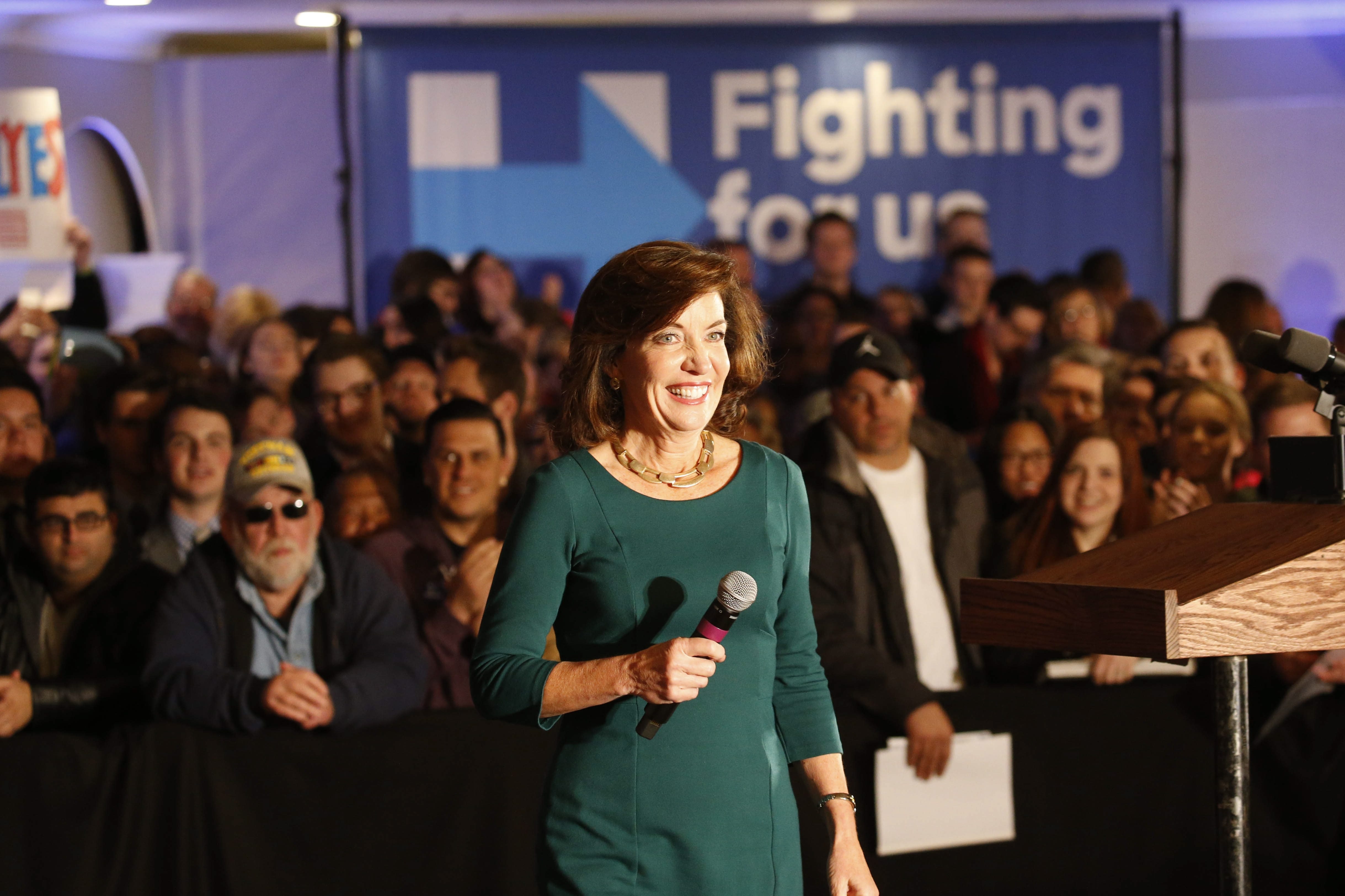 Hochul first met Clinton when she came to Western New York to campaign for her Senate seat in 2000. Hochul recalled that her daughter Katie, who was 10 at the time, insisted on stopping to bring flowers to the then-first lady, who spoke to a group of Hamburg businesspeople that day about how she planned to serve them in the Senate.

Over the next 16 years, Hochul became one of the local politicians closest to Clinton, working with her on a variety of issues and spending time on the campaign trail with her both in her failed 2008 presidential run and this year.

Hochul had to be in New York Tuesday because Cuomo was out of state at the convention, and she was glued to the television as Clinton sealed the nomination.

And just like Hogan, Hochul couldn’t help but think first about her mother, Patricia Ann Courtney, who passed away at the age of 76 in 2014.

“She would have loved to see this,” said Hochul, citing her mother’s admiration for Clinton and her longing to see a woman president. “And it also reminded me that I have a daughter – and how inspirational it must be for her that now, there are no barriers.”