That was the No. 1 question people Googled Monday night during first lady Michelle Obama's "perfect speech" at the Democratic National Convention in Philadelphia.

Hurwitz, a Wayland, Mass., native in her late 30s, is the pen behind the first lady's address, according to multiple national media reports.

Michelle Obama's speech framed the upcoming presidential election from the unique points of view of a wife, mother and first lady.

It earned nearly universal acclaim for its sincerity, its passion for Hillary Clinton's candidacy and its ability to subtly -- and gracefully -- jab at Republican nominee Donald J. Trump without even using his name.

Hurwitz crafted the words, and Michelle Obama delivered them -- just as she has for the last eight years. 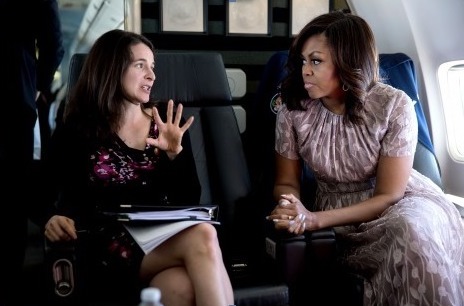 The flap sparked a flurry of controversy amid accusations Melania plagiarized the first lady's speech while on the same national stage.

Besides serving as senior presidential speechwriter, Hurwitz also serves as special assistant to the president and as a senior policy and strategy adviser to the White House Council on Women and Girls, according to the Truman National Security Project.

The Harvard Law School graduate actually once worked against the Obamas.

Hurwitz was Hillary Clinton's top speechwriter in the 2008 presidential primary.

That included Hillary Clinton's concession speech at the Democratic National Convention in Denver:

A Washington Post report stated that two days later, Hurwitz was hired by the Obamas.

RELATED: What's on Michelle Obama's mind? Meet the speechwriter who puts it into words

Capital Cool: A Star in Stripes