PHILADELPHIA – I have a chant playing on replay in my head. It started last week in Cleveland, it’s continuing here, and it goes like this:

One person, into a squawky megaphone: “Tell me what democracy looks like!”

The sweaty, sunburnt crowd: “THIS is what democracy looks like!”

Protesters adopt many rallying calls; this one is among the most frequent. Setting aside a technicality – democracy is electing leaders; marching and protesting is actually freedom of assembly and speech – let’s take a look at “what democracy looks like” from the streets of Philadelphia.

First, my vantage point: I’m writing this while standing on the curb of Broad Street, a major thoroughfare in Philadelphia that extends from City Hall, where the protesters are congregating, to the Wells Fargo Center a few miles away, where the Democratic National Convention is taking place.

In front of me, about 100 protesters just marched by. A half-dozen of them were carrying, pall-bearer-style, a red, white and blue casket painted with the letters DNC. They were heading down Broad Street toward where the convention is taking place.

Directly in front of me are rows of police. Some are on foot; many are on bicycles or in cars. To my left are hundreds of protesters congregated on the City Hall plaza. The police are waiting for the rest of them to march.

They will, but it’ll take time.

They have some things to say first because, in their mind, democracy doesn’t just look like people marching down the street. Democracy also looks like speakers rallying a crowd from a small platform stage.

That’s what’s been happening for the last couple hours Tuesday evening at this gathering, which was dubbed “Shut Down the DNC!” and advertised through social media and on yellow fliers handed out earlier in the day. The fine print from that flier: “Put an end to police brutality, mass incarceration, poverty wages, underfunded schooling, lack of healthcare, wars/occupation abroad.”

It was true advertising. The speakers on stage wielded their words onto all those topics, creating a verbal smash-up of their takes on social issues between chants that ranged from “Black lives matter!” to “No Clinton. No KKK. No Wall Street USA.”

As the police formed a perimeter and waited for them to march, some of the speakers turned their words to law enforcement.

Monica Moorehead, the presidential candidate from the Workers World Party – a Communist party – told the crowd to remember that the police were not there to protect their march, but rather control them.

“Let’s not get caught up in an argument of good cop, bad cop – they’re cops,” Moorehead said, seeming to spit out the last word, rather than just say it. 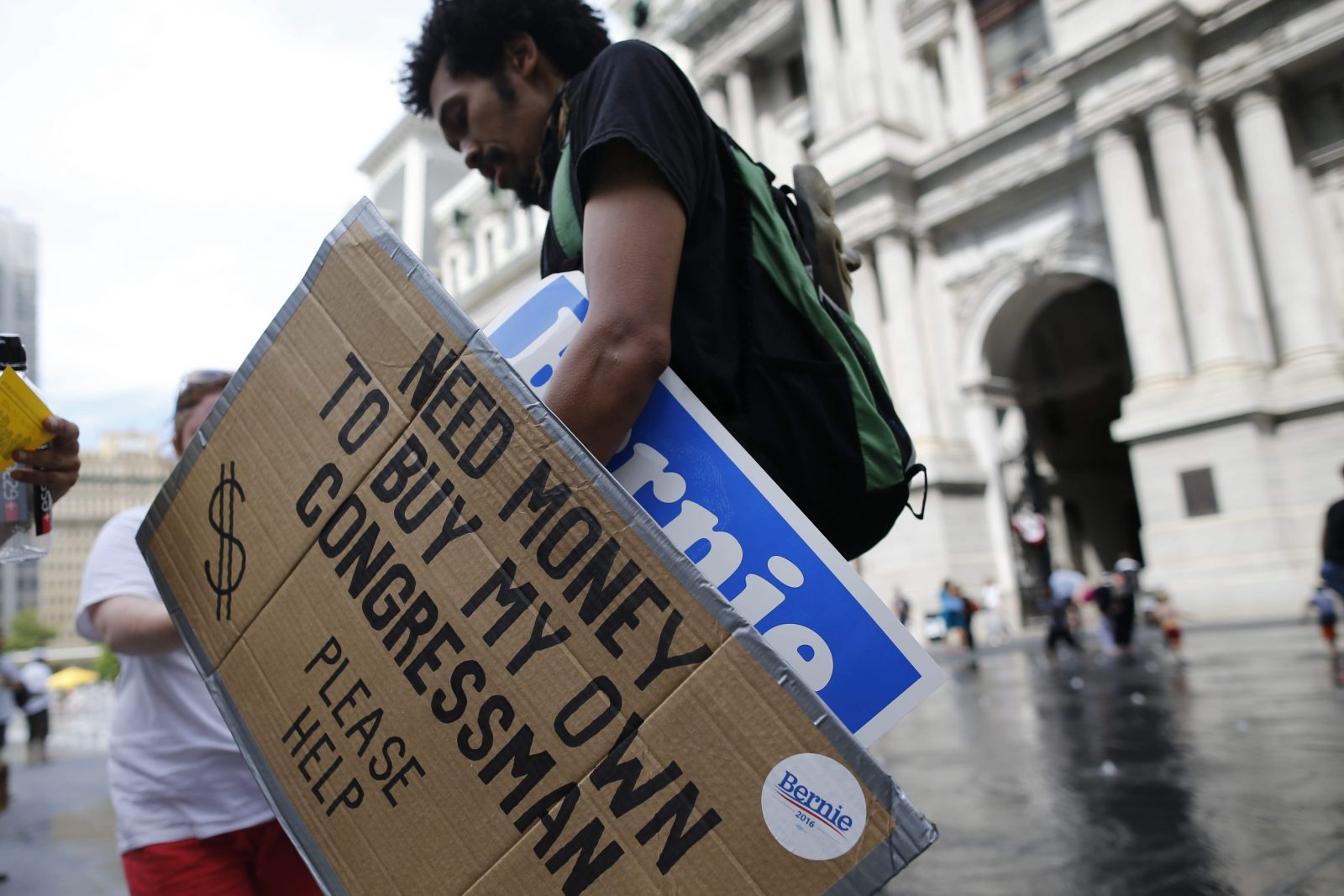 Leo Crudup of Maplewood, N.J., carries a sign during a rally outside City Hall in Philadelphia on July 26. (Derek Gee/Buffalo News)

Around the time Moorehead spoke, a twentysomething man in the crowd noticed a series of chalk-scrawled messages on the sidewalk. One of them said, “NO Such Thing As Innocent Police.” Another: “Yes, ALL Pigs!”

He grabbed a large chunk of sidewalk chalk, found an open space on the sidewalk and knelt slowly. His green ball cap was turned backward, slightly obscuring his actions as his wrote: “Police Have Families Too.”

He slipped away quietly; a few moments later, a couple of protesters saw the message and started scowling. Minutes later, a man on the stage noted angrily that the rally had been infiltrated.

“If you’re not in with Black Lives Matter movement,” he screamed, “move on!”

[RELATED:Sanders backers fight to take down flag with the Confederate symbol]

This is what democracy looks like: People don’t always agree with you.

That’s a feeling the protesters know deeply, and as I’ve written this story standing on the curb of Broad Street, I’ve seen it, too.

The demonstrators, marchers and police are to my front and sides.

Behind me is the Ritz-Carlton, a swanky hotel with six towering columns that befit its neoclassical architecture. As I’ve been writing, I’ve occasionally turned around to see who’s coming in and out of the hotel. It’s a parade of wealth: Men with bespoke suits and hairstyles carved in pomade; women with saucer-sized designer sunglasses and stylishly tall heels.

The 99 percent are in front of me, marching and chanting and telling us what democracy looks like.

The 1 percent are behind me, quietly exhibiting what capitalism looks like. And democracy too. Many of them are going to the convention, which means by income, position and – this week – by voting power, they are the ones whom the protesters are trying to either influence or overcome.

Except when I’ve turned my head to observe the 1 percent’s take on the demonstration in front of them, I’ve seen shaking heads. I saw one guy hold up his iPhone, take a video, smirk and get in a cab to the convention.

Take it as nothing more than a half-hour at the doorstep of the Ritz, but the 1 percent was choosing to ignore the 99 percent in front of them.