PHILADELPHIA – Being a Bernie Sanders supporter can’t be easy. It may be energizing, but it can also be lonely. It can make you feel powerless. It can feed into your anger.

Imagine: You work all primary season to defeat a political Goliath. You come closer, closer than anyone – probably even Sanders himself – could have imagined.

But ultimately you lose.

And when your guy Bernie then throws his endorsement behind Hillary Clinton? The politician you don’t trust, don’t want, and worked so hard to beat? And then it’s revealed, via an email leak, that the Democratic National Committee may have been working against you the whole time?

It makes you want to do something – anything – to feel as if you’re righting the system. Changing the world. You want a revolution.

[In his own words: Bernie Sanders' speech from Day One of Democratic National Convention]

A big one. A small one. You’ll take either. You just want something.

Even a flag, you can get torn down.

Early Monday afternoon, around the same time Sanders was speaking to his delegates and encouraging them to support Clinton in an effort to beat Donald Trump, a group of pro-Bernie demonstrators embarked on a planned march. They left from Philadelphia’s City Hall and were heading down Broad Street to FDR Park, which is near the convention itself.

But about two-thirds of the way there, on a stretch of road filled with brownstone homes and mom-and-pop businesses, one of the marchers noticed a Mississippi state flag hanging high above from a lamp post. There were state flags all along this stretch, but Mississippi’s leaped out to the demonstrators who, among other causes, had been chanting “Black lives matter!”

The insult: Mississippi’s state flag has the Confederate symbol.

People started talking. Fingers started pointing. Within moments, the protesters were chanting, “Take it down! Take it down!”

Then some of them sat down, refusing to move until the flag was removed – a task that would require an exceptionally tall ladder or a truck with a lift.

Groupthink started to kick in, and other marchers sat down, too. It was a butts-on-pavement brigade of people old and young, dressed in T-shirts and tank tops and, in the case of a trio of women, nothing on top but marijuana-leaf and American star pasties – a strategy for promoting patriotism and pot legalization.

The chants continued as a small contingent of police – perhaps a half-dozen visible officers – stuck around. The parade was moving forward to FDR Park, and most of the marchers continued on. But a few dozen stayed behind.

Now they had to figure out what to do next. The flag was up there. But how could they get it down?

Some tried to take leadership. Oliver LeBras stepped forward. A Frenchman who lives in Connecticut, he wore an artsy gray Bernie T-shirt with the senator’s snow-white hair popping off the fabric like an upside-down smile.

“Fire truck,” LeBras said. “They don’t even have to put the sirens on. We’ll wait. We’ll wait.”

He turned it into a question and started asking different groups of people: “We’ll wait? We’ll wait?”

A woman interjected, pointing out that the group had to get closer to the DNC to support the delegates inside. Earlier that day, Sanders delegates had revealed a long-shot campaign to convince superdelegates to switch their vote from Clinton.

The woman offered to come back in the morning. “I’ll be sitting here and I won’t move if it’s up there tomorrow,” she said, “but today we are here to– ”

She was drowned out by jeers. 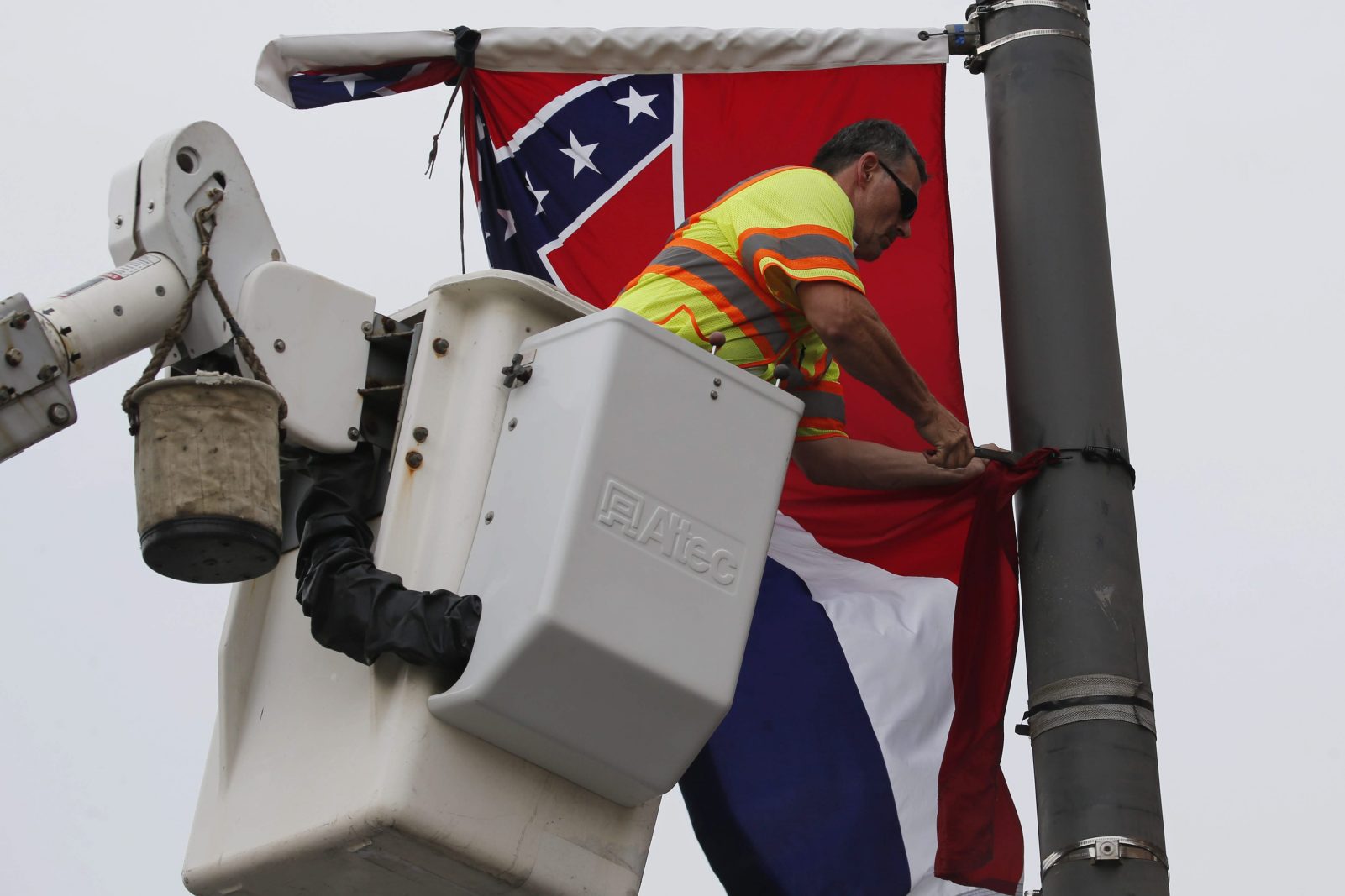 A city worker removes the Mississippi flag from a public light stand after a standoff with protesters on Broad Street in Philadelphia, Monday, July 25, 2016. (Photo by Derek Gee)

Another man stepped in to convince LeBras and the other delegates to move.

“Oliver, it’s a great point,” he said. “But let’s open up this discussion to the entire city.”

“You two shut up, and let people who aren’t white cisgender males talk!” she said, then turned around to walk away. (“Cisgender” is a term that means identifying with your anatomical gender).

“If you don’t want to be here, and you don’t agree with this tactic, march down to the DNC!” she said to LeBras.

“I agree with you!” LeBras said. “I’m not the one who’s asking people to sit down.”

At this point, it was indeed getting confusing, in a way that’s a microcosm of Occupy-style leadership, which is to say there is no leader. An African-American woman from the group was yelling at nearby shop owners, calling one racist, until she realized that the city – not the business owners – were responsible for what hangs off streetlights.

A tanned, surfer-styled guy went around asking people for shoelaces, which he tied together and attached to a single shoe. He tried to lasso the contraption around the flag and pull it down. He failed, and at the same time, the police warned him he could be penalized for damaging city properly.

But about 45 minutes into the sit-in, the police did show up with some good news: An officer arrived to say the city was sending a lift truck to take down the flag.

That calmed the demonstrators, and so did some music. One of the protesters was carrying a guitar and started playing “Give Peace a Chance.”

An hour into the sit-in, the crowd had dwindled to a dozen or so, but they were now getting along. They were eating pizza from a nearby shop. They were singing (and changing the words: “All we are saying, is tear this flag down. …”)

“When people are singing,” Sherman said, “nobody can be mad at each other.”

But they were getting anxious for that city truck to show up. That impatience, blended with the addition of dozens more demonstrators from two marches that passed by, started to amp up tensions again.

More media, more cameras, more law enforcement – and on the part of the Bernie supporters who just want to see something change, more desire for an actual, tangible result.

They wanted a success.

The surfer guy was once again trying to lasso the flag, and when officers tried to stop him, he yelled, “I’ll take the arrest!”

As he started to wind up, the police surrounding him pointed down the street. He wheeled around, and so did the other demonstrators.

A City of Philadelphia truck was arriving. The driver parked it by the lamp post, climbed into the bucket lift, raised himself up, and tore down the flag.

Sherman told me afterward that the moment felt like primary night in Oregon, when she learned Sanders had won.

“There was a moment of pure elation and pure peace,” she said. “There was a yell coming out of my mouth, but my soul was completely at peace.”

It felt like a victory. Something Sanders supporters feel is all-too-unfairly rare.