It’s not often that I think about my own funeral.

But waiting to get strapped into a harness at the top of the nearly half-mile MistRider zip line at Niagara Falls, Ont., the pessimist in me couldn’t help but seep out.

Actually, it had come out even earlier, in stop-and-go traffic on the Rainbow Bridge when I glanced to the left and noticed the brand new attraction I was headed for. My first reaction, even from a distance: That’s a &$%# thin wire.

Suddenly, it seemed all too possible that all of those readers who’ve suggested some form of “Go jump in the lake,” “You’re all wet,” or “Why don’t you go over the Falls without a barrel” might get their wish. Sure, technically I’d be splattered on dry land, as the zip line runs adjacent to the river, with a perfect last view of both the American and Canadian falls. But this was no time to quibble.

Nor had research helped. It took me to last summer’s headlines after a North Carolina girl became the latest to die when her zip line tether snapped. “Zip line regulations scrutinized after several deaths ” and “Zip line accidents soar” were not inspirational.

On the bright side, it could be one last chance for me to give the readers what they want.

My real funeral would be small: Just a few close friends and relatives who didn’t have other plans.

But the online reaction? Not since the Munchkins sang over the Wicked Witch’s body would there be such joy.

Based on the phone calls, emails and web comments over the years, there are lots of groups who wouldn’t mind seeing me make news: Public school teachers. City and suburban cops. The Buffalo Niagara Partnership, the Buffalo Niagara Enterprise, the Erie County Industrial Development ... oh heck, the entire business community. All those who “don’t see color” but see red whenever I write about black. The Cuomo administration.

In terms of enemies per column inch, it was a life well-lived.

“Sir, you have to take your cap off,” the attendant said, interrupting my burial plans. He had noticed it under the flimsy plastic safety helmet they’d handed out. The helmet seemed obviously too thin to offer any real protection, but the bright blue color would make it easier to find the body.

Not that you really expect to die. You know the statistics say this is far safer than driving. But there’s always that little sliver of doubt; that moment when, suddenly, numbers just don’t count.

It didn’t help watching them attach the riders before me and noticing that the bracket holding the harness is not bolted onto the wire; the only thing holding it on appears to be the rider’s body weight. I’m sure engineering says this use of gravity makes perfect sense, but still ...

Then you step into the launching gate, and everything changes. 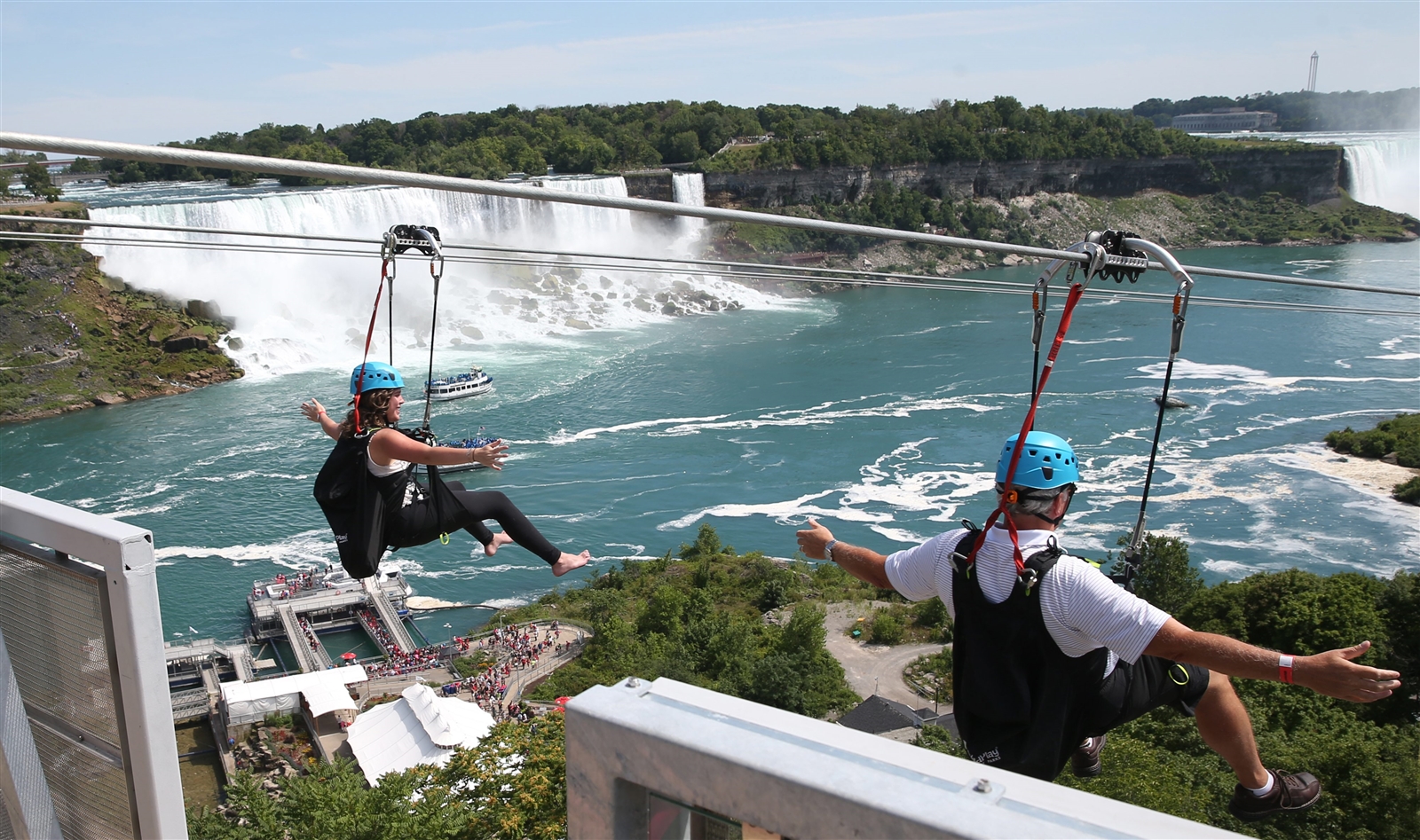 With the majestic American and Horseshoe falls and their swirling river to the left, the green treetops below and Wednesday’s bright blue sky above, all of the anxieties and petty concerns melt away and there’s nothing left but a peaceful appreciation of what nature has given us.

And then you’re off. Declining on a pitch comparable to an intermediate ski slope, it’s a roughly 45- to 60-second ride, depending on whether you extend your arms to create wind resistance and slow down, or keep them tucked for more speed.

I tried both, wanting the exhilaration but also to make it last as long as possible. The ride is both tranquil and thrilling at the same time, providing a unique vantage point to appreciate the falls while reaching speeds of up to 40 mph.

And then it’s over. But not before it sends me safe and sound back to my keyboard with the reinvigoration only nature – with a minor intrusion by man – can provide.

And my critics? They’ll just have to wait. But they may get another chance.

After all, former President George H.W. Bush was celebrating his 90th birthday when he made one last jump in 2014. And former Erie County Sheriff Tom Higgins was 83 when he took the plunge for the first time in 2013. So it’s never too late.

Of course, by the time you reach those ages, there’s not much left to lose anyway.

Oooops. There’s another group I just ticked off.