Depew is unexpectedly finding itself the focus of a battle to erase the 124-year-old village.

Some of the 15,000 residents want to dissolve the village government and are trying to get a public referendum on the ballot this year.

Battle lines are drawn over a renewed debate on dissolution. And it’s getting ugly. Two opposing grassroots forces are warring, pitting village workers and some residents who want to save the village against government watchdog-types pushing for dissolution.

Those pushing to eliminate the village say it boils down to affordability. They point to a stagnant village with government debt, spending and taxes spiraling out of control. They argue that village debt has jumped by 440 percent to $8.24 million, its tax levy has soared by 86 percent and spending is up 56 percent, all since 2003.

Village leaders are not validating their numbers, but instead say it’s easy for the other side to spin numbers that mislead the public into thinking dissolution is a big money-saver without any costs of its own.

Depew residents living in a $100,000 home in the Town of Lancaster now pay about $1,449 in combined town and village taxes and could potentially save $542 a year if the village ceased to exist. Similarly, village residents living in the Town of Cheektowaga pay about $1,967 in combined village and town taxes, and could possibly save $1,016 in taxes.

“We can’t afford the village anymore,” said Dan Beutler, a 23-year resident who supports dissolution. “The reality is we have to move on, or we’re always going to be stagnant.”

But hundreds of red, white and blue signs championing village preservation and urging people to vote “No” on dissolution are popping up all over Depew, scattered throughout neighborhoods on both sides of Transit Road.

“I live here and pay taxes. People love their village and put their signs out,” said Fire Chief Scott Wegst, who is active with the V.O.T.E. grassroots group opposing dissolution and has a sign on his lawn. “They’re making a statement. You have a lot of volunteer firefighters who love their community and don’t want to see their services change.”

Seemingly overnight, Depew, which covers just under five square miles, has become a village divided. Geograhically, it’s split, too, with two-thirds of it in Cheektowaga, and the remainder in the Town of Lancaster.

And the 140-member Depew Fire Department, the largest volunteer company in Erie County, is in the midst of the fight. The mayor and a village trustee are in the department, and two other trustees were formerly affiliated with it.

Some say the mushrooming issue - cropping up six years after government reform activist Kevin Gaughan’s big dissolution push - is more serious this time around, even without him involved. Even though Depew was on Gaughan’s target list, it quickly fell off after dissolution efforts in Williamsville and Sloan failed overwhelmingly.

Dissolution has never come to a vote in Depew. Nor have there been referendum petitions circulated, until now. 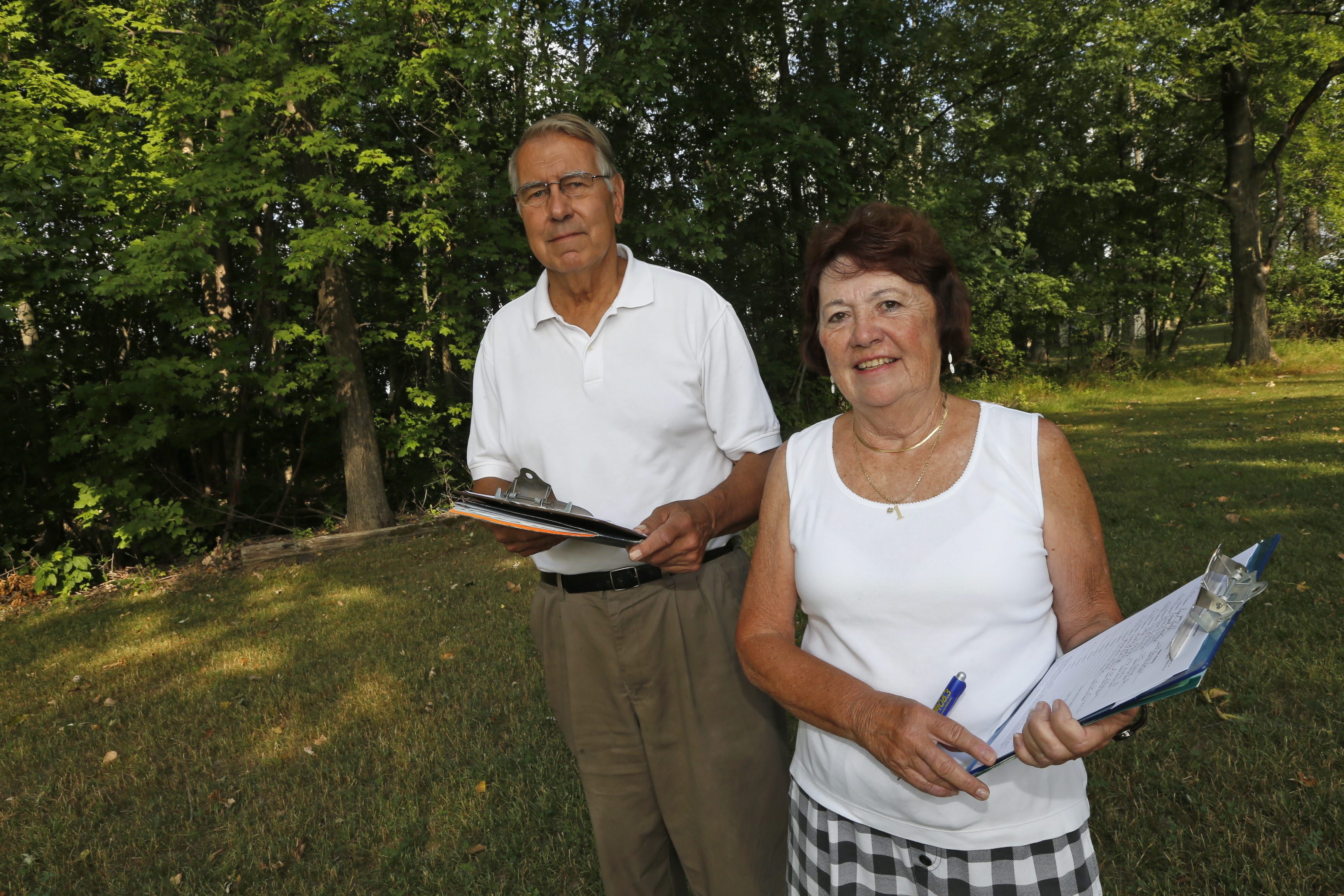 Joan Priebe and Irvine. G. Reinig II have been soliciting signatures to cause a referendum to dissolve the Village of Depew. (Robert Kirkham/Buffalo News)

The grassroots movement is the latest on the dissolution circuit since the Village of Forestville in Chautauqua County voted last year to dissolve. The Orleans County Village of Medina, however, rejected the idea.

V.O.T.E., standing for Villagers Opposed to Elimination, has reignited its efforts to preserve Depew and persuade voters that dissolving won’t generate the tax savings being touted.

Dissolution advocates say the village has become way too expensive to operate as a separate entity. It has 162 employees, including a 29-member police force. They argue that even though some services have been shaved and picked up by the two towns serving Depew, it’s not enough to cut costs.

“The village has been stagnant for a number of years, and we’re all built out,” he said. “We’re not like Lancaster, where there has been all this growth in the last 10 to 15 years and it still has room to grow.”

On the flip side, there’s the classic argument of preserving community identity, saving jobs of friends and family coupled with concerns that dissolving carries expenses of it’s own, negating some of the hype surrounding tax savings talk. Plus village residents would still be responsible for paying off outstanding debt on such things as sewer improvements and fire trucks.

“The village has looked at ways to save money, but basically the village just caters to special interest groups - the firemen, the police, the Public Works workers,” Reinig said. “The service is good, but the problem is we’re paying an outrageous fee for it.”

Priebe used to be affiliated with the VOTE group but now finds herself on the other side of the debate. “If you dissolve the village, your headaches are over. There are no contract negotiations, and no budgets to try and figure out,” she said.

Reinig, who has scrutinized village budgets for years, has been busy crunching projected tax savings for Depew. Both towns are not calculating any projected savings or additional expenses, saying it’s too preliminary.

Dorothy Majchrzak, 81, sat on her Olmstead Avenue front porch last week, looking out on the “Protect Village Life” sign on her lawn. She  reflected on how good Depew has been to her since she moved to the village from Buffalo in the 1970s.

“You shouldn’t change something that’s good. Leave it alone,” she said. “I don’t want to be part of the Town of Lancaster. Depew is fine the way it is.”

Her neighbor three doors away, Lewis Heltman, is a 20-year village machine equipment operator, heading up the highway workers’ union. “It’s not an issue of ‘save my job,’” he said. “The homework shows you have village debt that needs to be paid off, and our taxes will go up when that debt is added. Show me where the taxes aren’t high.”

Some feel the loss of village character is at stake.

“I’ve lived in Depew my whole life, and I feel its identity would be lost,” said Frank Zawodzinski, 29, a Buffalo school teacher.

“Character of the community?” Priebe said, “What character? Take a look around at the abandoned houses.”

The door-to-door campaign to circulate petitions in the last month has been fiery. “It is ugly already,” Reinig said. “We have people on the other side creating fear in people’s minds about services and response time.”

Government leaders have their opinions, too.

“Nobody wants to have something happen like that in their village because they like village life,” Depew Mayor Jesse C. Nikonowicz said. “You always have the option of moving. We’re willing to pay for extra services.”

Lancaster Supervisor Johanna M. Coleman remained neutral. “If they decide to dissolve, we would take on providing services. It would be work to afford the transition, but we are here to serve the public,” she said.