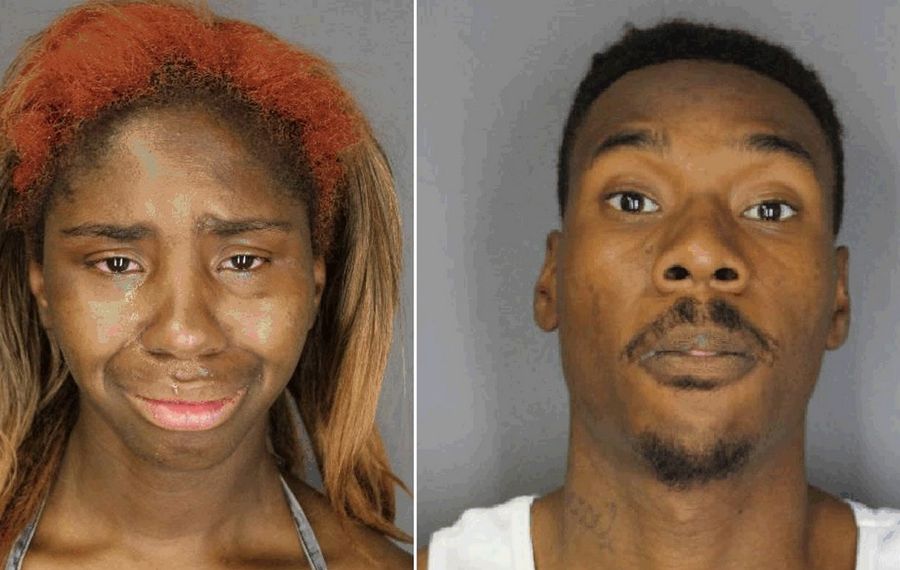 Before police arrived Monday, the children had resorted to standing on their tiptoes to get water from the toilet bowl, unable to reach the sink.

The three kids – ages 3, 2 and 1 – had been subject to “deplorable” conditions, according to a statement from the Buffalo Police Department. Their two-story home on 15th Street was littered with broken glass, takeout food boxes and dirty diapers. The temperature inside was at least 90 degrees.

When officers got there, two of the children were naked. The third was wearing only a diaper.

“All three of the children appeared emaciated and extremely malnourished,” the Police Department said.

Maureen Fabre, 24, and Terrell Hagans, 26, were charged with three counts of child endangerment. Fabre is the mother of all three children, and Hagans is the father of the youngest two.

The children were taken to Women & Children’s Hospital for treatment and placed under custody of Child Protective Services.

Although police had responded to an anonymous tip, most neighbors said they were unaware someone was even living there.

The man who lived next door referred to their home as “transient housing,” meaning many different people had come in and out of the residence over the past 10 years.

Another neighbor, who identified himself only as Michael, said he had seen a woman and her children leaving the home a couple of times.

His one interaction with her was warning her to keep an eye on her kids, as they had a habit of wandering out into the busy street.

“I didn’t suspect anything, but that happened more than once,” he said.

Jennear Hagans, 31, Hagans’ sister, came to her brother’s defense, saying it was the children’s mother who had been taking care of them.

She said Fabre had been the primary caretaker ever since their relationship had gotten rocky around December. On one recent occasion, she said she had even called the police on him after he took the children without permission.

The news that her brother’s children were living in poor conditions was a shock, she said, one that has left her defending her brother to friends and family who learned about the charges.

“That’s not my brother at all,” Jennear Hagans said. “My brother would do anything and everything for the kids. What they’re saying on the news has nothing to do with him.”

She added that the children typically smelled whenever her brother got them from Fabre. Extra clothes and diapers still rest in the corner of her dining room for that reason.

She said she was “heartbroken” to realize the extent of it but is relieved to know the kids are at least now safe.

Buffalo police were assisted in the investigation by Cheektowaga police and the Erie County District Attorney’s Office.