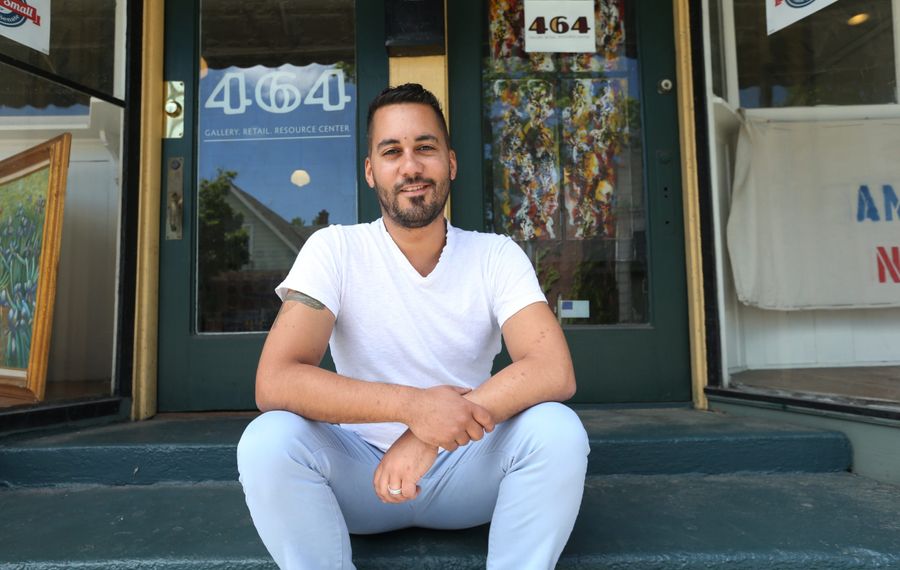 The email flashed across my screen on Feb. 3, 2009, with a straightforward, almost dismissible subject line: “Announcing 464. The New Art Space.”

At that moment, I regarded the opening of a new gallery on a little-loved stretch of Amherst Street as a cute blip on what was then becoming a much more crowded cultural radar screen. So I wrote about it, sent my piece off and returned to tracking ostensibly bigger changes in Western New York’s cultural landscape.

I didn’t realize it at the time, but that email heralded one of the most important cultural developments Buffalo has seen in the past decade. The gallery’s success stories as a cultural incubator are manifold. They include fostering the talents of Buffalo artists such as painter and muralist Chuck Tingley and spurring the creation of events like City of Night, which familiarized Western New Yorkers with the industrial grandeur of Silo City.

After the gallery’s opening exhibition, which attracted 300 people, the buzz about 464 kept growing. It was clear to even the most aloof observer of the arts that this storefront space in a former hardware store was becoming the headquarters for a new movement of young artists hungry for ways to create and share their work.

Last week, after seven years as the locus for Buffalo’s grass-roots visual arts community and an anchor of the Amherst Street revival, 464 held its final event. Its co-founder Marcus L. Wise, an entrepreneur who led the gallery with restless drive and a do-it-yourself attitude, is moving to Milwaukee to join his life partner. An era in the Black Rock neighborhood and Buffalo’s diverse arts scene is coming to an end.

The evolution of 464 from pipe dream to reality to cultural force was a largely spontaneous affair. It was fueled by the energy and appetites of young Buffalo artists who called the gallery home and used it as the launching pad for art careers and projects. Wise, a 2008 University at Buffalo graduate, launched the gallery out of a combination of frustration and necessity. As an aspiring photographer, he tried and failed in the months after graduation to find a local apprenticeship that would help him develop his skills. So he set up an online portfolio, called Mindweb, to display and market his work.

Gradually, his website attracted the attention of other artists looking for non-traditional outlets, and he folded them in. A year later, he and Jill Hart opened 464 in a building owned by Amherst Street property owner Susan Cholewa to give local artists a place to show their work and grow their careers.

What made 464 so attractive to aspiring or early-career artists, Wise said, was the alternative it provided to the strict demands of an “official” American art career.

“I think there’s an academic track for most artists, if you’re ever to succeed,” Wise said. “You go to college for art and you go and get your MFA for art and then you teach or go away. But not everybody does that. So if you don’t do that, the education isn’t there for you, the opportunities aren’t there for you. So that’s why I did it ... I was passionate about giving people that opportunity, because that’s what I wanted and I wish people would have done that for me.”

Wise’s welcoming, learn-as-you-go approach has earned him no small amount of ire from the region’s art elite, some of whom have judged 464 exhibitions harshly or taken issue with his practice of charging artists for shows to pay the gallery’s rent. But that approach has earned him more respect from creative Western New Yorkers, who, until 464 came along, had limited options for professional development.

A case in point is Tingley, whose art career essentially started when he answered Wise’s Craigslist ad seeking artists who wanted to show work in Wise’s space.

“It started as a welcoming community of artists, because we all began at the ground level. If nothing else, we were just doing it because we all loved creating art,” said Tingley, now one of the best-known artists working in Buffalo. “It let me experiment not only practicing my art every day, but learning what it takes to do a show, learning what works and doesn’t work.”

It was the same with the tight-knit group of young artists and professionals who made up Emerging Leaders in the Arts Buffalo, a project that emerged from the defunct Arts Council in Buffalo and Erie County. Wise remembers the moment he and other members of the group decided to keep the organization going after the Arts Council shut down, and one of its key members moved out of town.

“We were hanging out in my backyard at the time and we were like, ‘What the hell, why is this dead? We should do this,’ ” Wise said. “We’ve had five great years of doing some really amazing stuff, including City of Night and public art projects.”

More than anything, 464 is responsible for breaking down the idea that visual art is a hobby for the elite. Its legacy is a culture more open than ever to the creative impulse, whether it takes the form of a painting in the Albright-Knox or a performance in a rusted-out grain elevator.

“I think that the average person is afraid of art galleries. They think they have to wear a suit, be of a certain class level, make a certain amount of money and when you show up you have to talk in this kind of high language and sip your wine with your pinky up,” Wise said. “I always wanted to create a space where people felt comfortable.”

Wise and his collaborators did just what they set out to do. And Buffalo is better for it.