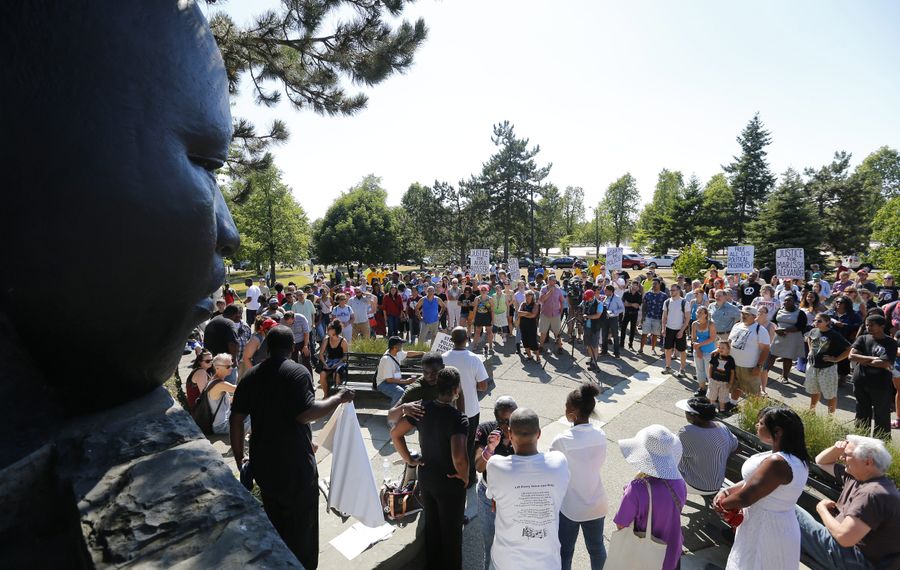 Power in Numbers, a Buffalo advocacy group, was founded in 1994 on the belief that a united community is the only means to overcome injustice.

So after the events of this week – in which two African-American men were killed by police – the group’s director, Taniqua Simmons, took to Facebook to create an event. She knew she needed to do something.

“We have a duty to act when things are happening within our community and society that need to be changed,” she said. “It’s all of our responsibilities.”

The gathering late Friday afternoon in Martin Luther King Park was one of many held across the country as feelings of outrage have spread over the deaths of Alton Sterling in Baton Rouge, La., and Philando Castile in Falcon Heights, Minn. And in the wake of the shooting in Dallas that killed five police officers, there was also an emphasis on peaceful protest.

By 4 p.m., hundreds of community members had shown up at the park, and surrounding the immense bronze statue of King, clusters of people stood, many holding decorated poster boards.

There were signs reading “Black Lives Matter,” “I Still Have a Dream,” “No Justice, No Peace.” One bore the names of black men and women who have died at the hands of police. Another urged citizens to be active in local government.

Simmons, who stepped up to the megaphone first, said the signs were representative of the broad commitment to “do something” in the face of adversity.

“Today marks the day that we at Power in Numbers are going to start our campaign called ‘Do Something,’ ” she said. “At this rally, before you go, it is my duty to let you know how you can be a part of the change.”

India Walton, 34, a registered nurse and a member of the Community First Alliance, said she couldn’t have stayed home Friday afternoon. She has four boys – the oldest is 19, the youngest is 4 – and said any one of them could have been in the place of Sterling or Castile.

Before her older kids go out, she said, she always feels like she has to remind them to be careful around people tasked with keeping them safe. She doesn’t want it to be that way anymore.

“What I hope we can gain from today is to become better organized as a people, as black people,” Walton said. “Not only do black lives matter but black money matters and black votes matter, and when you want to see something change, there’s a way to get it done.”

The sentiment was echoed throughout the event, with Masten Distrct Council Member Ulysees O. Wingo preaching the importance of local politics and a man in the crowd registering voters.

Wingo told the crowd there is power in unity, in coming together for a common cause.

A chant of “black lives matter” then broke out among those gathered.

“Now all of us are saying the same thing,” he said, enthusiastically. “That’s unity.”