On June 22, Shohei Shigematsu of the Office for Metropolitan Architecture spoke to a crowd of assembled artists, journalists and officials in Quebec City about his firm's design for the National Fine Arts Museum of Quebec.

Many of his comments about the building, which like the Albright-Knox Art Gallery sits on a historic campus in a major park, are relevant to his firm's work on Buffalo's best-known cultural asset. They also give a good sense of the architect's droll sense of humor about himself and about the worlds of art and architecture.

Below is an audio recording of his remarks, followed by a transcript.

Thank you all for being here today.

I’m originally from Japan, so I have this straight face and monotone way of speaking. So please don’t measure my excitement through the way I talk.

Ever since our first visit – our first visit was quite wild from New York to Quebec City. It was entirely white, in a blizzard and arrived in complete snow. So it was a very dramatic entry into the city.

Since then, of course, we were very inspired by Quebec City in general, and first of all, people’s openness. You might think that I say this to every city, but actually I really felt people were quite open here.

We were also inspired by the site obviously, the building’s prominent location along Grand Allee and between the city and the park and embedded in a historical context, next to both a prison and church. As you might know, it’s a dream for an architect to build a building that is connected to both prison and church. 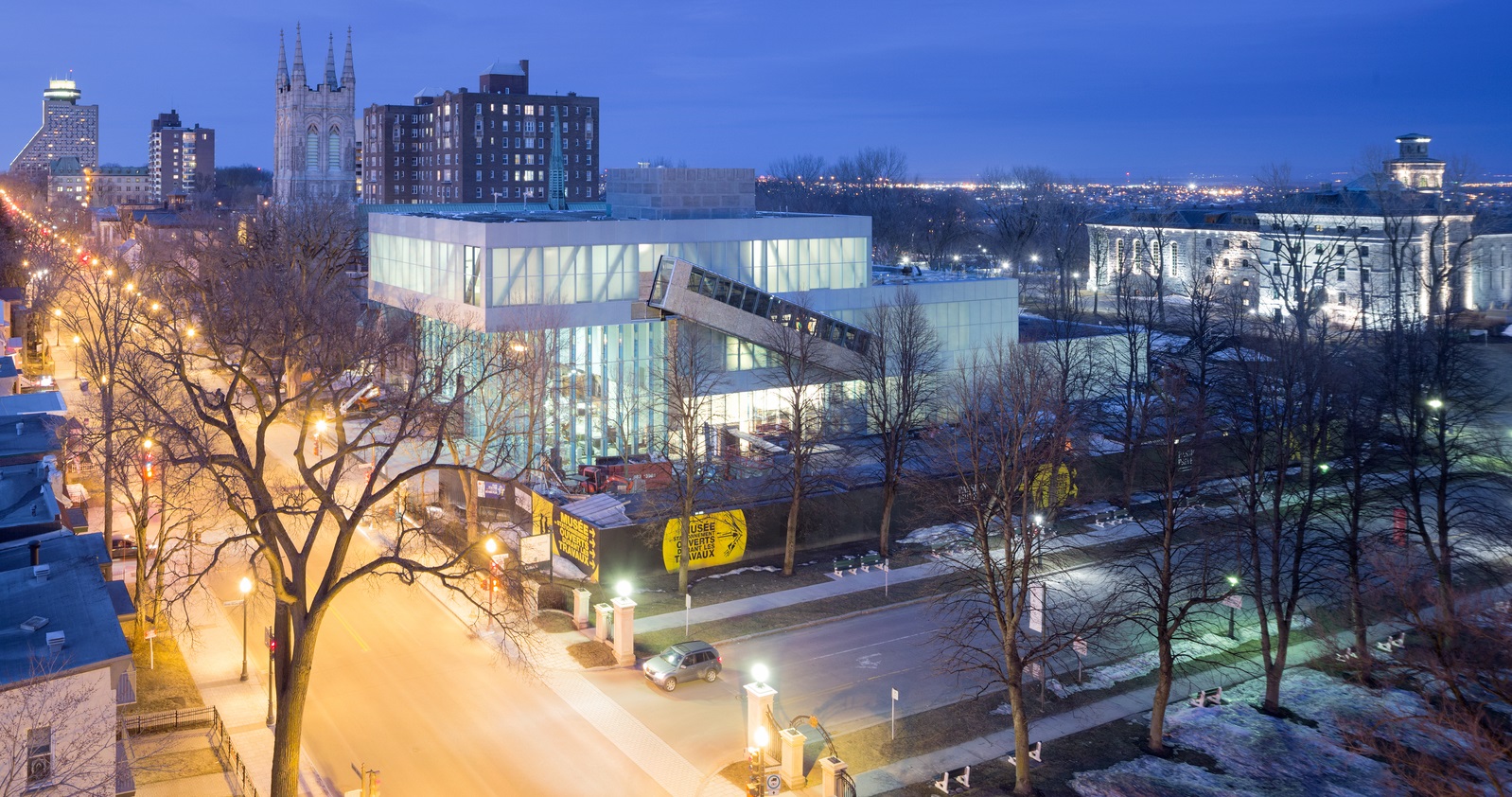 The Pierre Lassonde Pavilion in Quebec is an OMA addition to the Museum of Fine Art of Quebec that opens Friday. (Iwan Baan/OMA)

We were inspired by the richness of the collection, obviously, and at a time when art is diversifying and now including media, performance, education and events and so on, this museum collection holds a very unique and diverse range of work. And also now that art is being globalized, we really appreciate the local specificity of the collection of this museum.

There were also challenges obviously in this project. One of the main challenges of the project was to design a contemporary space within a historic context, adjacent to historical buildings. As an architect, this challenge is often also the greatest opportunity. We must find a way to be respectful and continue the intelligence of those who came before us, but at the same time responding to the current moment and finding our own voice. So it was a great pleasure to be challenged by this context.

We responded to this challenge in a couple of ways. First by the transparency. The iconic gesture of this museum is of course apparent, but the most iconic move we made together with the museum was to make the museum very transparent, because museums tend to be closed and introverted boxes. Instead this building is open and transparent and providing a gateway from the city to the park and a connection from the new pavilion to the existing complex.

Because the context is so rich already, we wanted the building to reflect the richness of the context rather than trying to compete. Depending on the time of the year, the building also reflects the four seasons, both in the views it showcases as well as its transparency and the way it reflects light.

Luckily, this project was conceived in 2009, after the credit crisis, the ending time of iconic architecture. The effect was for buildings to become simpler and stronger in the presence and in statement.

We were actually pleased that this museum represents the shift in the art and museum domain. Through a number of clear and simple moves, we created a series of spaces within the building, which are comfortable – which we heard a lot through this opening week, that people feel comfortable in this space and generous enough to truly showcase the spectacular collection.

Given the nature of the project, the nature of the project as an extension, we have a very diverse range of spaces within the campus, from the Beaux Art building to the prison building and this building. And I think that is very essential character of a museum nowadays, to really respond to a diverse range of artforms nowadays. I hope that as a whole, not just the Pierre Lassonde Pavilion, but the whole museum will respond to the need of an artist and different curators. 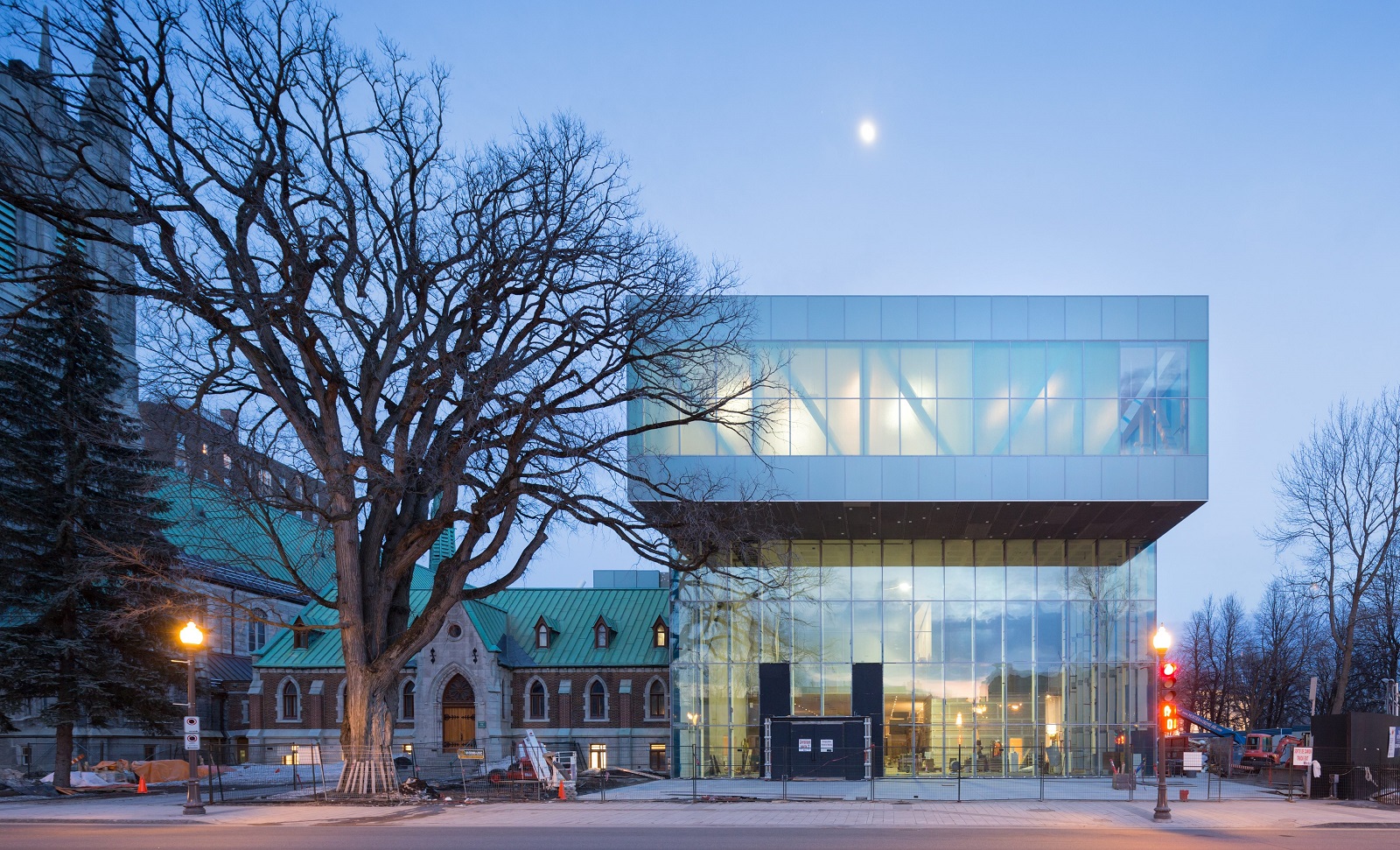 In the end, art becomes a catalyst, which we always wanted it to be, between activity of the city and the park. So the art is not just about viewing, but it’s a catalyst to connect people to the nature and between new and old.

Those primary moves helped us to create an especially memorable moment. I just described some that you might already notice, but for example, the way the park spills into the museum through the skylights, through he windows and the museum into the park, through the extension of exhibitions to the terraces and outdoor staircases for example.

The required underground connection, which tend to be a daunting experience in a typical museum, but the museum was courageous enough to put one of the most important collection, the Riopelle triptych, which is 40 meters long, to the tunnel so that it became not a tunnel but the gallery space, which was a very important move and the result of a collaboration.

Thirdly, the grand hall serves as an urban plaza for Quebec City, so that entire grand lobby is not just an entry lobby, but it’s also an urban plaza or street where a lot of activities could happen.

Just a kind of final note, and it’s a little bit self-indulgent, but we won a competition thanks to this museum in Albright-Knox Gallery in Buffalo. It’s another museum extension – it seems like I am doomed to do museum extensions. But, since our commission is very close to the Canadian border, in Buffalo, we can easily escape to Canada depending on the kind of new regime that might come to the United States. We hope you will welcome us back.

Thank you very much for being here, and we hope you will enjoy the building as much as we have enjoyed the process of realizing such an important and world-class museum.