Thin Man opened June 17, and while it is not yet serving its own beer, it is offering a well-rounded draft and bottle list. A co-worker, the most knowledgeable beer drinker I know, described the offerings as wide-ranging enough to please the everydrinker while still taking care to cater to even the most beer-geeky among us.

“It clearly has a lot of the same curation you’d get from Allen Burger Venture while also demonstrating a lot of European, and specifically Belgian, depth from Blue Monk,” he opined when I showed him the menu.

On my recent visit, the food was similarly well thought out. Items were familiar enough to have broad appeal while still managing to charm the — forgive my use of the term — foodies among us via some combination of reconceptualization, ingredient choice, and deft execution, depending on the dish.

Fried chicken livers ($9) from the “Snacks & Share” section of the menu were reminiscent of Chinese takeout. Each knobby nugget (about eight to an order) boasted a shattering, delicately crisp shell that belied a creamy, mellow offal center. A sticky-sweet and spicy sauce of sambal and citrus, judiciously applied, and a sprinkling of sesame seeds and scallions, drove home its similitude to orange chicken. 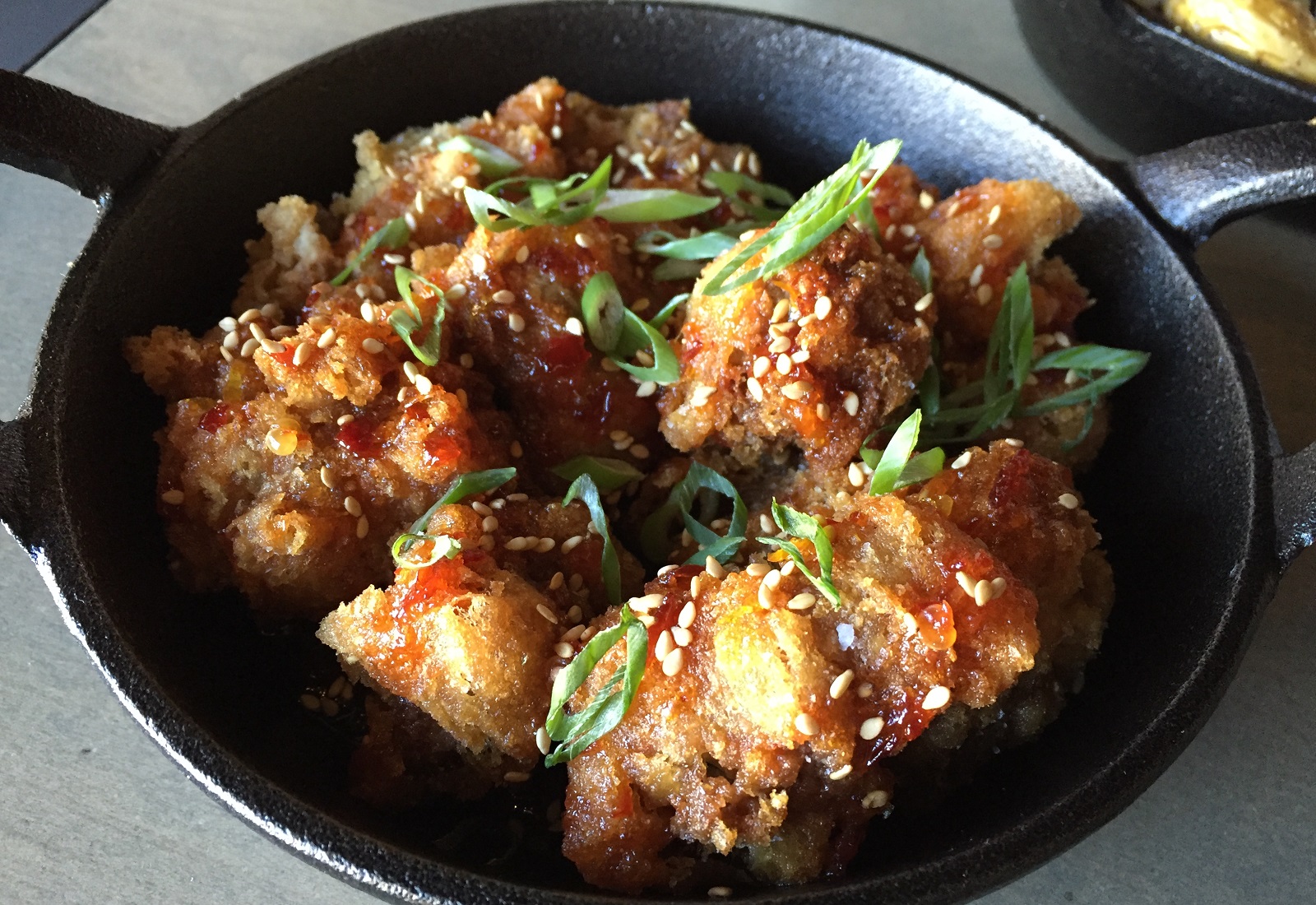 Scallions cut on the bias also made an appearance atop a starter of crunchy potatoes ($6), providing visual continuity between the first two dishes served. But where the chicken livers took us to Asia in terms of flavor profile, the potatoes — of the fingerling variety — were unmistakably European in influence.

Doused in jammy onions and a thick blanket of fontina cheese sauce, and dusted with pulverized parmesan frico, the potatoes were a lesson in salt’s ability to transform a humble tuber into something special. The “crunchy” came not from deep-frying but from a blistering sear. I only wish each potato in my serving had had as much surface contact with the screaming hot pan as the crustiest of the bunch. 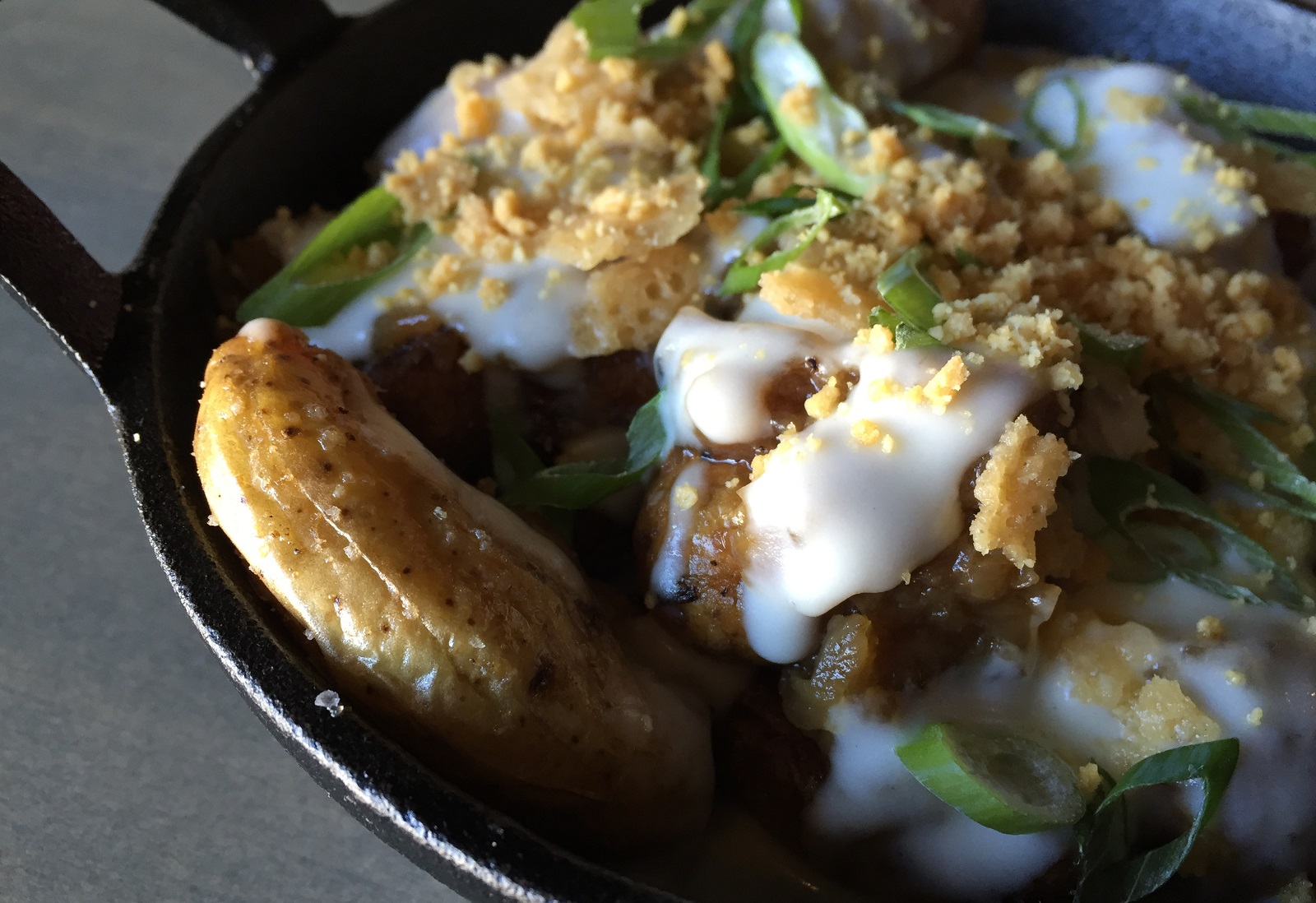 Chef Wieszala's crunchy potatoes are that and more. Creamy fontina and jammy onions keep the dish textural interesting. (Caitlin Hartney/Special to The News)

Likely aware that I was there on behalf of The Buffalo News, the kitchen sent out a dish of roasted bone marrow ($11) with herb salad and fried sweetbreads as a stand-in for croutons. The raw greens and bright vinaigrette were a welcome change of pace from the heaviness that characterized the rest of the meal. 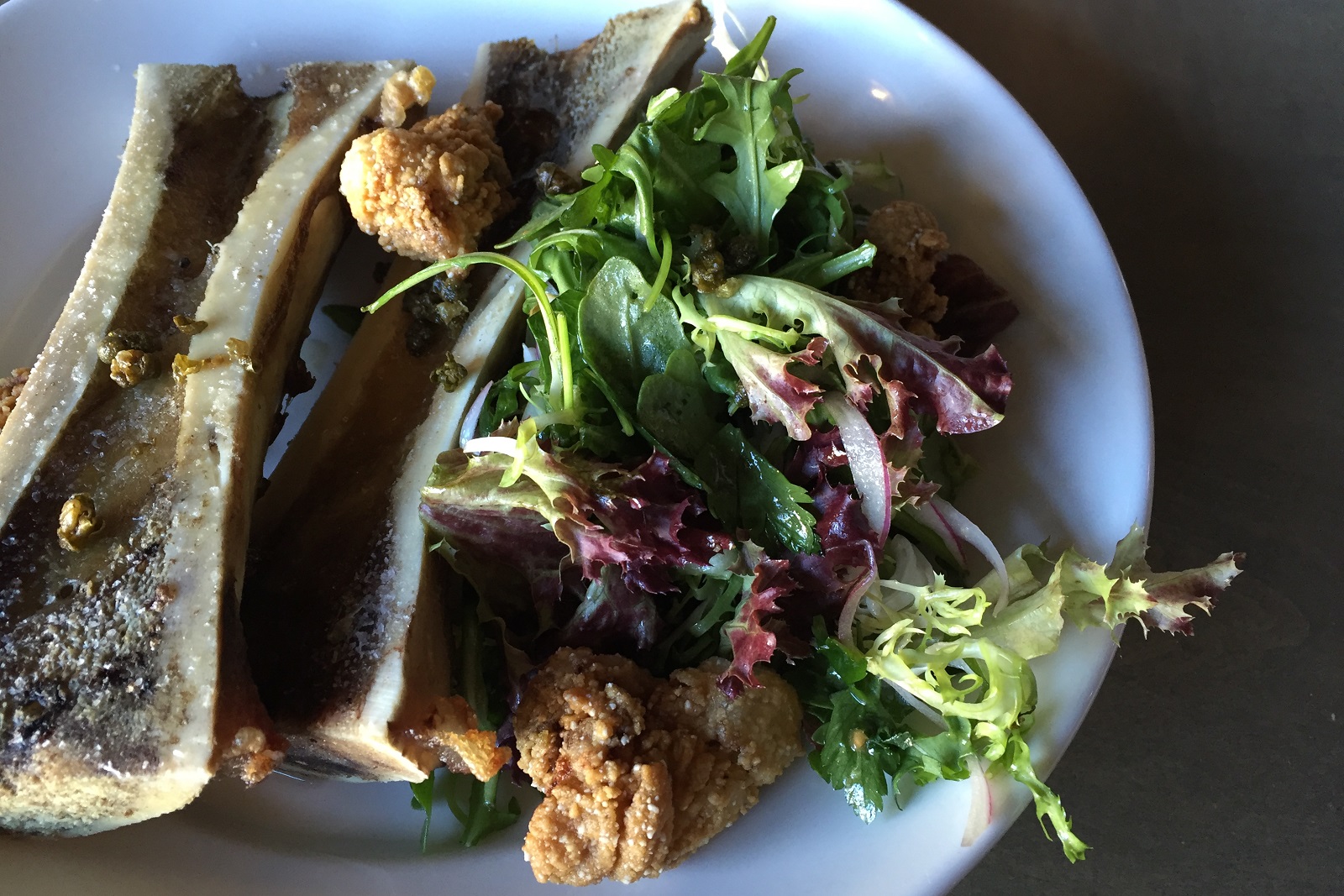 Lustiness continued through the entrée round with the Tokyo burger ($19). Served open faced with a fried egg and onion ring on a thick slice of buttery brioche, it could have been gimmicky in its devilish immoderation. In fact, it exceeded my expectations; it did not seem to comprise any single component simply for the sake of extravagance.

The half-pound patty, suffused with bone marrow, was cooked past the requested medium rare, but that did not detract much from its juiciness or beefiness. The some-might-say-glazed, I-say-shellacked, half-inch slice of pork belly that topped it renewed my faith in a cut of meat that too often is under-rendered by restaurant kitchens. 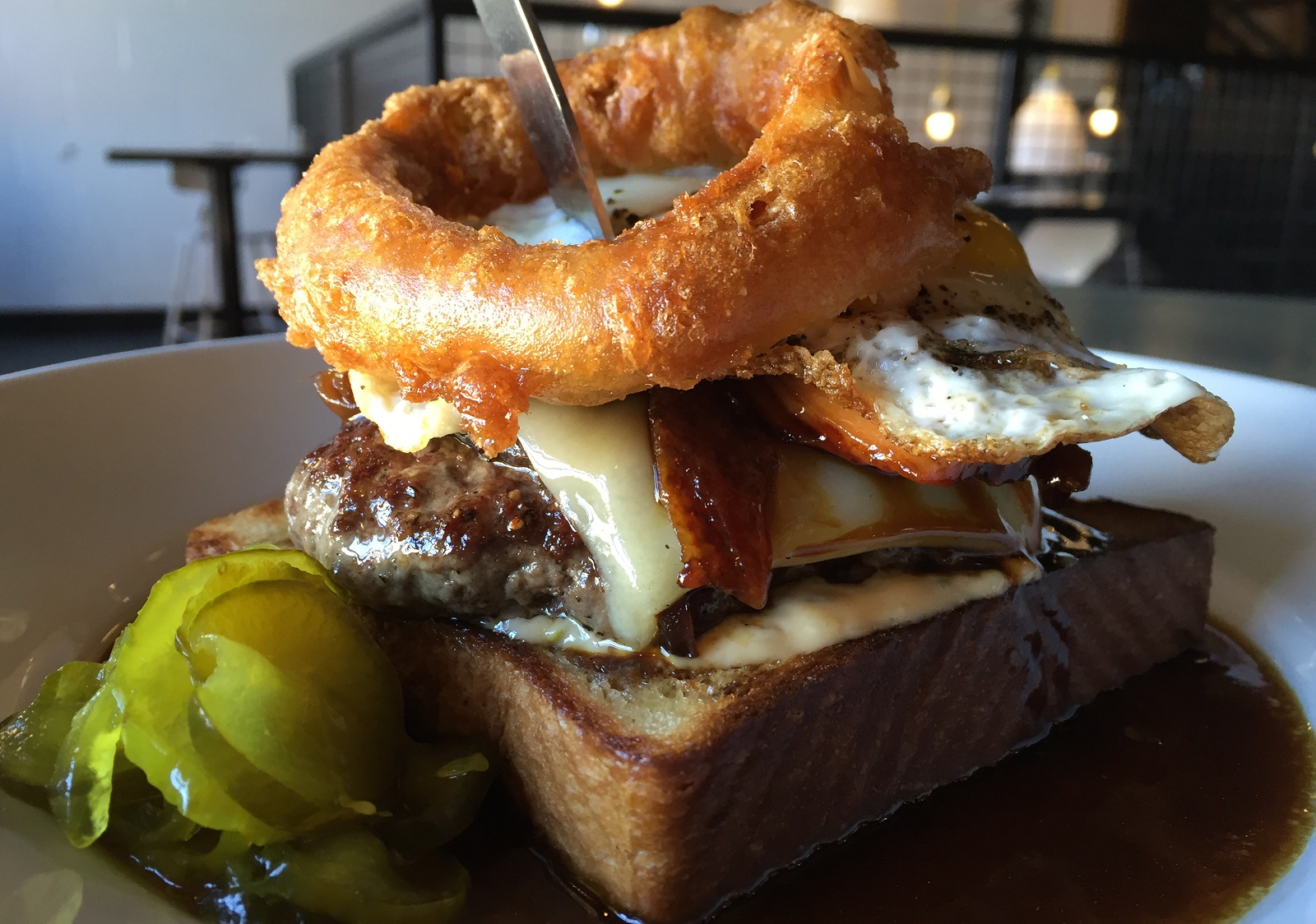 A flavorsome au poivre sauce and weeping slice of Gruyere stood as a gentle reminder that even a food as all-American as a burger can benefit from French inflection.

A tin tumbler of fries, described by my dining companion as walking a delicious line between fresh-cut and McDonald’s-style, gilded the zaftig lily. A smattering of sweet and sour bread-and-butter pickles rounded out the plate, because life is about balance. 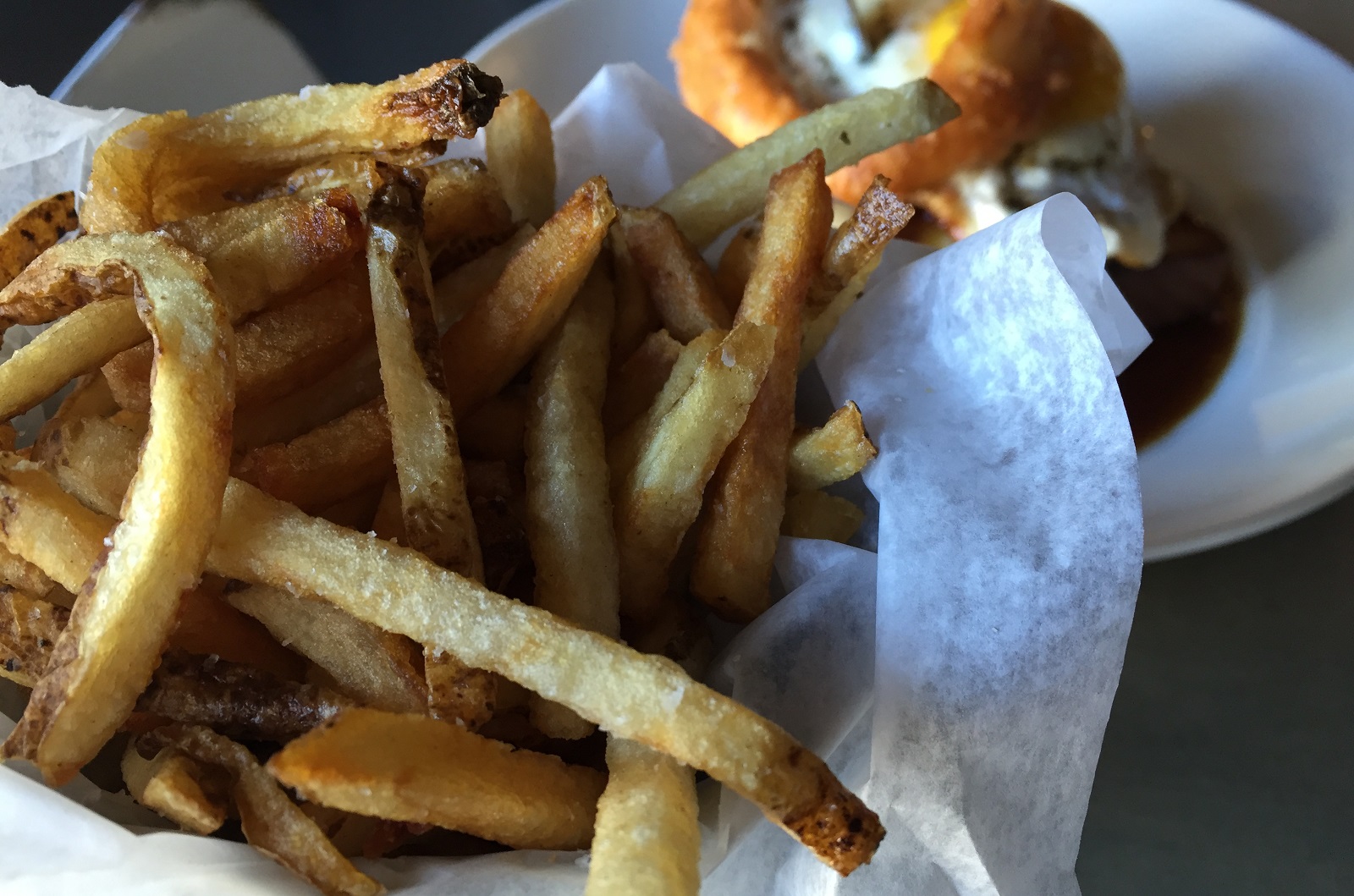 A T-Meadow Farm pork chop ($28) on special was less resilient to overcooking than the burger, resulting in a slightly tough piece of meat that was nonetheless moist and thoroughly seasoned thanks — I suspect — to  a brine. It was crowned with a simple pork ragout, heavy on the aromatics, and served on a bed of silky polenta that tasted more of the dairy that enriched it than corn itself. 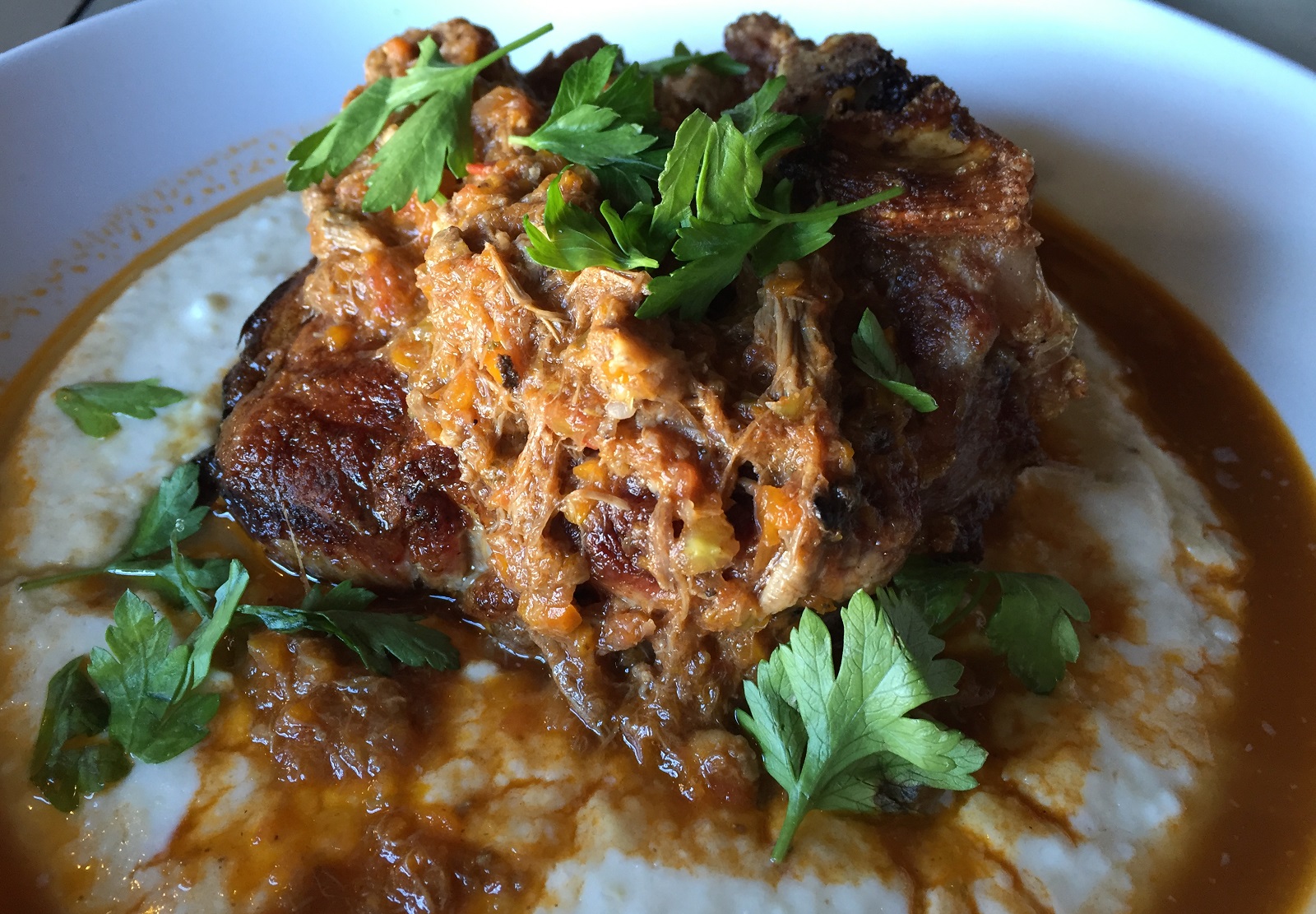 Chef Wieszala's pork chop, a recent daily special, was butchered in house from a T-Meadow hog. He served it over silky polenta. (Caitlin Hartney/Special to The News)

Vegetables were likewise subject to the luxuries of fat and salt, and were better for it. Jewel-toned carrots ($8) took on the character of candy without losing their inherent earthiness thanks to orange blossom honey. I could have done without the accompanying fresh ricotta, which is not an utterance I have ever before expressed.

In this case, though, by sheer volume and mouth-coating milkiness, it only attenuated the pleasures of a nearby pool of smoked pistachio butter so delectable I might go so far as to name it one of my favorite single tastes of the evening. 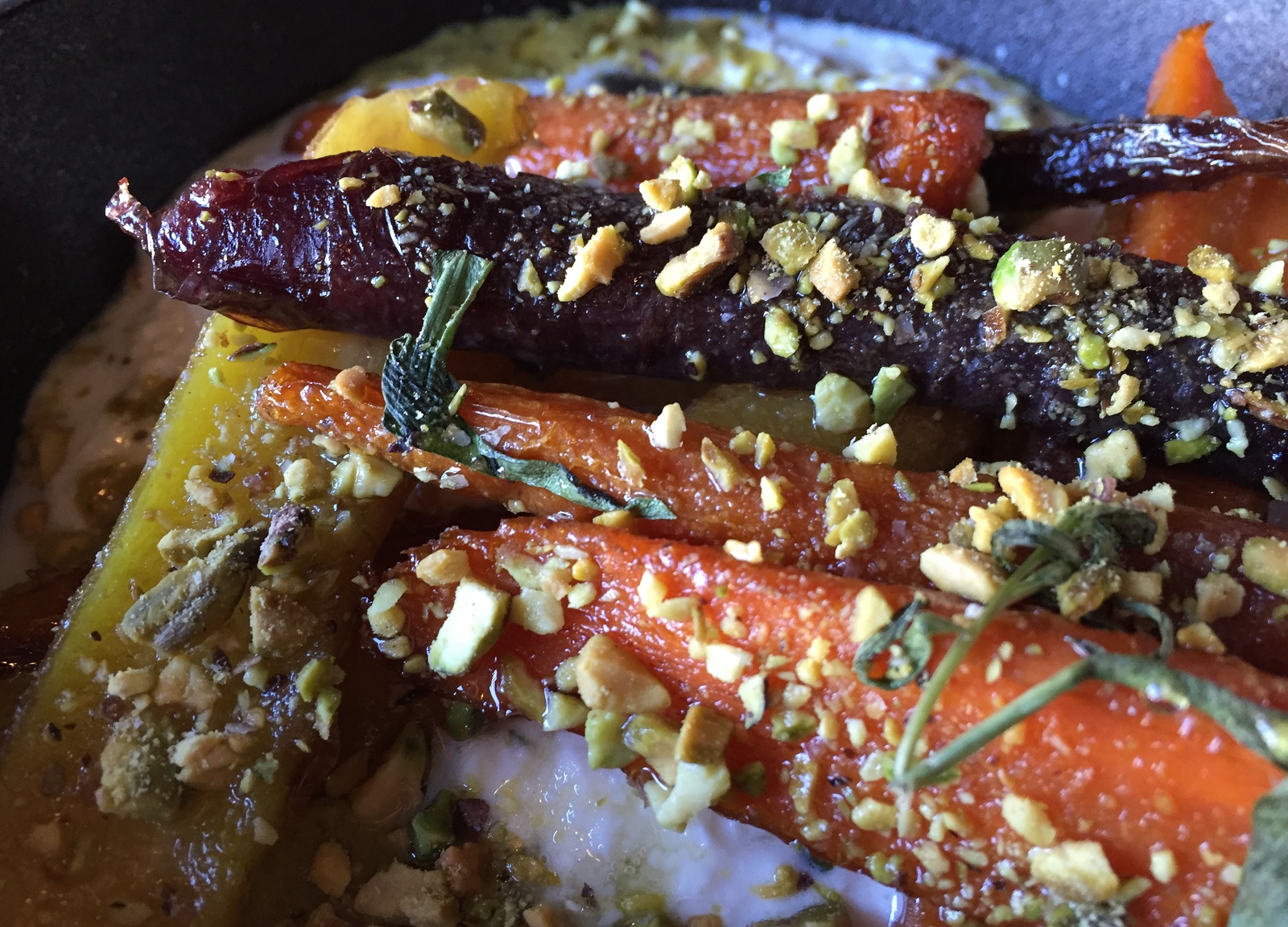 Chef Wieszala proves his prowess with vegetables in this dish of honey roasted carrots with smoked pistachio butter and ricotta. (Caitlin Hartney/Special to The News)

Officially, the restaurant’s name was inspired by the precursor to the modern crash test dummy, which was born, it turns out, in Western New York. But surely, the irony of calling a place that serves fried homemade Spam ($10) and something called “bacon nubs” ($9.50) Thin Man cannot be lost on its chef or proprietors.