No flags will be brought to half-staff, and a toast built around "chocolate rolls" is not the stuff of a state funeral. Still, the people who gather Sunday for a 4 p.m. memorial service at the Busti Church of God in Jamestown, the people brought together by respect for an extraordinary life, hardly need elaborate trappings to reach a fundamental understanding:

They will be saying goodbye to a pioneer, an American whose life - and example - encompassed an important era in human rights.

Diane Muench died in April, at 64. Her sister, Sharon Muench Richards, said Diane developed an infection in her back that eventually led to pneumonia. Her final illness created an open wound that could be painful to treat, and at the most excruciating times – when the ordeal was hard to bear – Diane would look at Sharon and say:

It was the way she faced the world: Others first, then herself.

Diane was born with Down syndrome, a genetic condition intertwined with developmental disabilities. The average life span for someone with the condition is 60, which means Diane outlived statistical and physical expectations. To her family, that’s no surprise: Beginning with infancy, she transcended what others mistakenly perceived as limitations. 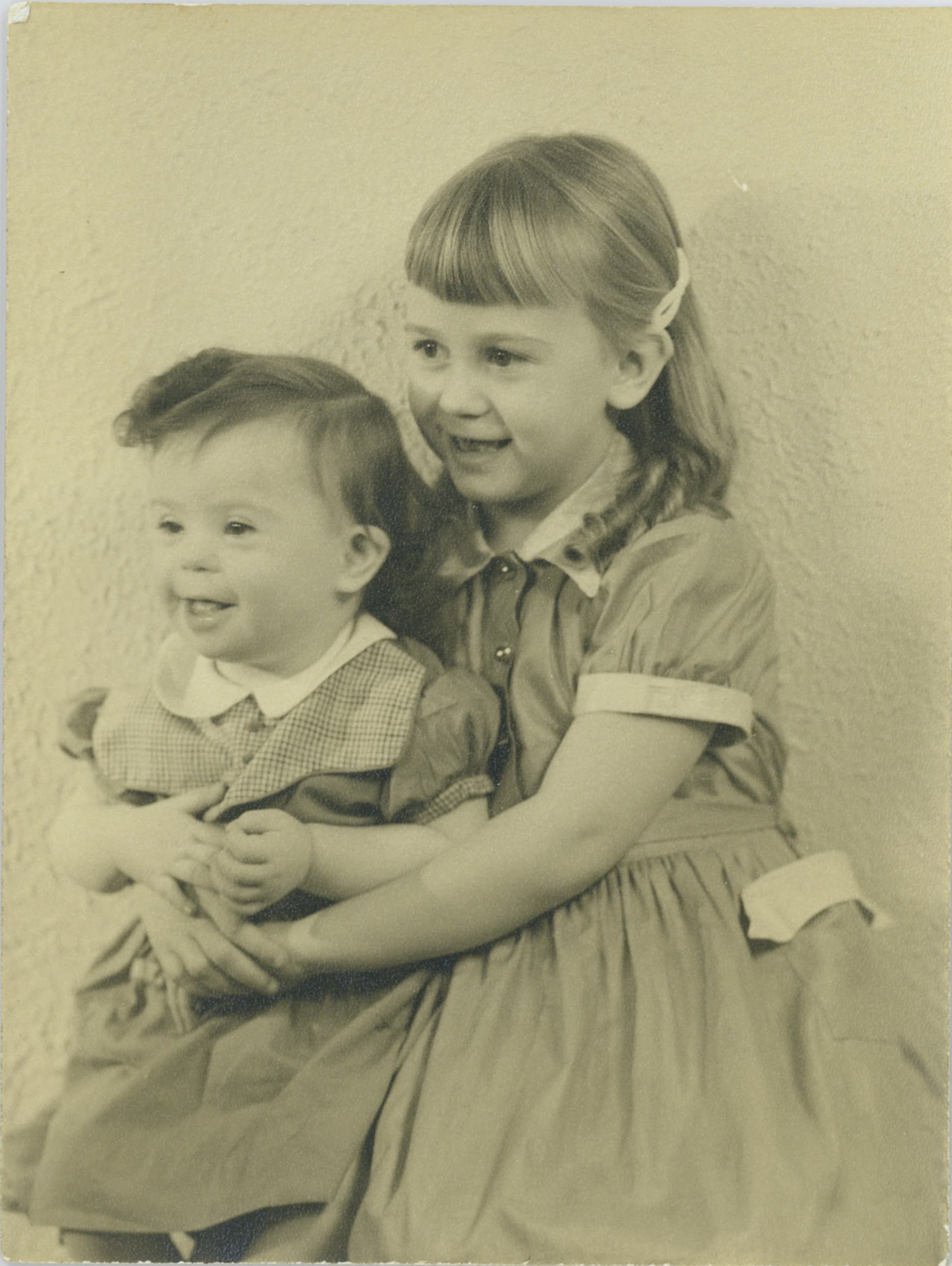 Sharon Muench Richards and her younger sister, Diane, when they were children. (Family photo)

Her parents were Elmer and Mary Muench (pronounced Minch), Buffalo natives who met and married in the 1940s, when they both worked at the Bemis Bag Co. Elmer served as a medic on Christmas Island during World War II, then came home to shovel coal at Niagara Mohawk’s Huntley power station. Once NiMo transferred him in 1950 to its Dunkirk steam station, Elmer and Mary settled in Fredonia.

In 1951, Mary gave birth to Diane, their second child. When she was an infant, Elmer and Mary brought the baby to a specialist. He did an examination. He said that Diane had Down syndrome. The doctor offered a harsh suggestion. At the time, the average life span for people with Down’s was about 25 years.

“She won’t live to be 3,” the doctor told the Muenches. “She’ll be nothing but heartache. Put her in an institution, and do it now. Then forget her.”

It was an era when Americans with disabilities were often locked away in walled compounds known as state schools. Those facilities were basically overcrowded holding centers, where residents were isolated and hidden away from the community.

Elmer and Mary heard the doctor out.

Then, in essence, they told him to get lost.

They chose to raise Diane at home, an act of quiet cultural rebellion. In doing so, they became an early part of one of the great civil rights movements in American history. There was little support and few services in those days for children with developmental disabilities. When Diane turned 5, Elmer brought her to a school district office with the intention of signing her up for kindergarten. School officials shook their heads:

We don’t accept those children.

The rejection burned the Muenches. They were involved in fledgling efforts to start an ARC chapter in northern Chautauqua County. They enrolled Diane at St. Joseph’s school in Dunkirk, which served what the school called “exceptional children,” a kinder way of describing the developmentally disabled than much of the language in fashion at the time.

Sharon and Michael Muench, a younger brother, remember when people with Down syndrome were described as “Mongoloid,” when the word “retarded” - and the harsher variation known as the "r word" - were in frequent use.

Diane had her own way of changing hearts. We were witnesses. My father worked with Elmer Muench at the steam station. The Muenches proudly gave Diane her rightful place in her hometown at a time when so many people with Down syndrome were locked away and out of sight. I remember Diane, at the kitchen table, kidding around with my dad. I remember the utter joy she showed whenever an old friend walked into the room.

By meeting her, you understood her dignity, her full humanity. In that fashion - without preaching, without lectures - she quietly taught people to step back and rethink the words they used.

“Once you knew her, you wouldn’t even think of using the ‘r’ word because of the power of the way she lived her life," said Greiner, a cousin to the Muenches. "We realized, because of Diane, it was unacceptable.”

That all began with a commitment from Elmer and Mary: They would do everything they could to give Diane as typical a life as possible. If that meant tuition and extra services they couldn’t afford, so be it. Husband and wife took extra jobs: Mary cleaned houses. Elmer would come home from the plant and work a night shift as a printer, or fry fish at a VFW.

The reward was immediate. Diane thrived. The little girl a doctor said would “be nothing but heartache” instead became a beloved part of her village.

“I have this (memory) of the neighborhood kids, all the kids outside playing, and she’s right in the middle of it, in the mix with all of us,” said her brother Michael, now a retired prison guard near Pittsburgh. If you visited the Muenches, Diane was usually at the kitchen table, shooting the breeze with her mom and dad ....

She had a passion for coloring intricate geometric patterns, finding comfort and peace of mind in the precise use of crayons long before that hobby became an upscale trend.

Diane relished angel cream doughnuts covered with chocolate icing, which she called “chocolate rolls;” family members soon began using the same expression. She loved to crochet, to make pot holders that could be used as family gifts: “Many ‘Diane rugs’ are still in existence,” said Greiner, who also promised that family members will toast Diane, at Sunday's service, with a round of "chocolate rolls."

The Muenches were frequent visitors to Walt Disney World. Diane had a passion for marching bands – “Her father’s daughter,” Sharon said – which left her in awe of the Disney parades. In appreciation, she sent a pot holder rug to Stan Freese, who became longtime musical director at Disneyland after serving in the early 1970s at Walt Disney World. The letter triggered a string of correspondence.

"The fact that she was impressed and sensitive to the Disney music, and the Disney band, it had an effect on all of us," said Freese, reached by telephone Friday in California. "We were glad to know we had a fan like Diane." 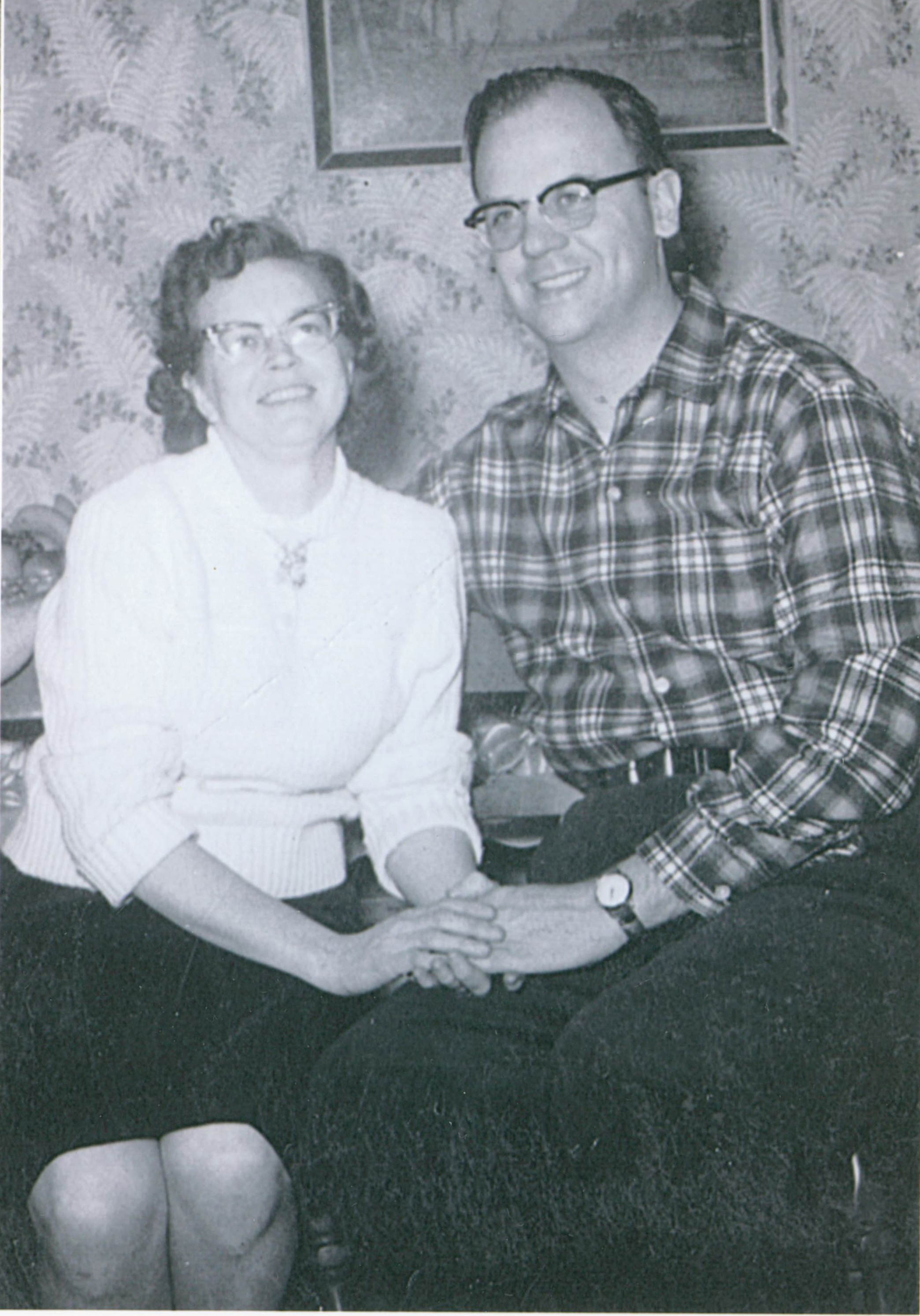 Buffalo natives Mary and Elmer Muench: From the day their daughter Diane was born, a vow to give her as typical a life as possible. (Family photo)

Every year, she would travel with her parents for vacation getaways in the Blue Ridge Mountains, in Virginia. When Elmer and Mary died, the family brought their ashes to one of the high peaks in the chain.

Diane’s ashes, too, are now at the mountaintop.

Her life corresponded with an awakening of national conscience about the rights – and full humanity - of the disabled. The infant the doctors wanted to lock away grew into a woman who held a job for years at sheltered workshops in Dunkirk and Jamestown, where she helped to package different products. She lived at home until Elmer and Mary died, a loss difficult for Diane to bear, but she eventually moved into a community residence.

All of that, in itself, was remarkable. Still, you had to know Diane to fully understand the depth and texture of her life. She had a rich and intuitive sense of humor. If she teased you, it usually meant she loved you, her family says. “She could say your name 10 different ways and mean 10 different things,” Greiner said.

Sarah Sidey, a nurse who worked for years in Chautauqua County, said Diane was unforgettably good-natured, even when her illness caused her extreme pain. “When she walked in, she always lit up the room," Sidey said. "You could be having a hard day, and she would immediately make it better and put a smile on your face.”

A year ago, Sidey moved to Colorado, a longtime dream but a difficult decision: It meant leaving behind many friends and relatives. Part of the consolation was a farewell present Sidey received from Diane, the image of a butterfly - torn from a coloring book - that had been colored in distinct lines and bright shades.

It was a gift, but Sidey knew: It was also Diane's self-portrait.

Sean Kirst is a contributing writer for The Buffalo News. Respond to this column by leaving a comment, or by emailing him at seanpeterkirst@gmail.com. Follow Kirst on Twitter at https://twitter.com/seankirst