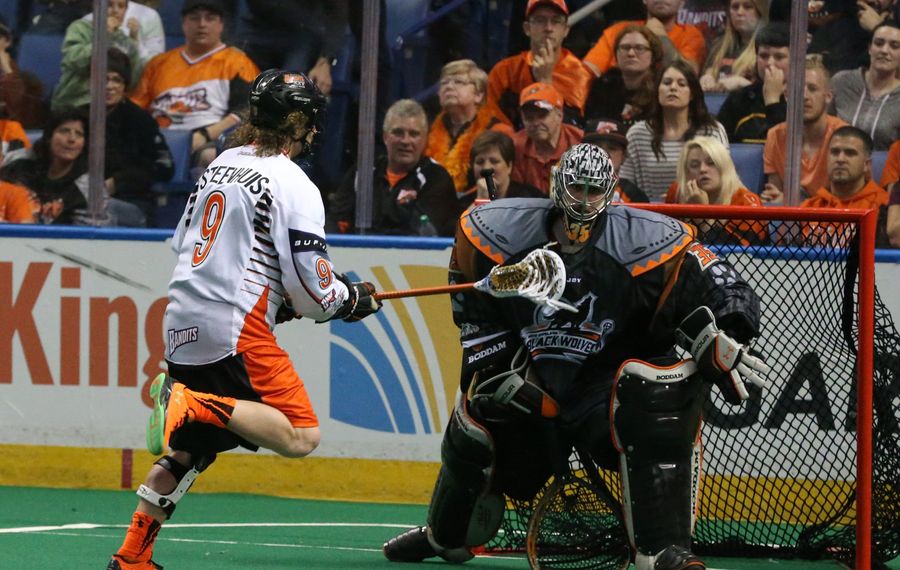 No one can say the New England Black Wolves didn’t go down without a fight in the National Lacrosse League East final against the Buffalo Bandits.

The Black Wolves exerted maximum effort in Game Two of the series. They just fell a bit short in a 20-15 loss that sent them home for the season.

“Everything was earned,” coach Glenn Clark of New England. “I’m happy with the way the guys played. They played to the final whistle. Sometimes you just don’t win. It’s disappointing, but if you look at the totality of the season, it was a good year.”

“They never quit,” Buffalo goalie Anthony Cosmo said. “Hats off to them.”

The Black Wolves finished a surprising season, considering they were in last place overall in 2015. New England refused to go away Saturday until the last few minutes, and sent a strong signal that they will be tough in the future.

“You’re never happy when you don’t hold the trophy, but from where we started and where we got to, there was progress,” Clark said. “You have to build a foundation at some point, and we have some of those pieces in place.”

Ex-Bandit Kevin Buchanan enjoyed the ride with the Black Wolves this season, particularly since it was his first trip to the NLL division finals.

Buchanan was traded by Buffalo to the Philadelphia Wings before the 2013 season. After taking 2014 off, he wound up with that franchise when it moved to New England for the 2015 season. It’s been a good fit, as shown by his career-high 62 points in the regular season. He finished with six goals Saturday in a superb performance.

“In terms of the personal life, since I’m living in Boston, it’s been great for me,” Buchanan said. “It’s a two-hour drive from my house, so there’s a lot less traveling. I don’t have to fly. It’s been awesome.”

Buchanan was with the Bandits in 2013, and had his worst year in the NLL. The forward scored 10 goals and 19 assists. One of the problems was that he was the only player on the roster who lived outside of driving distance of Buffalo. Therefore, he had to fly in for games and couldn’t take part in mid-week workouts.

“It didn’t help,” he said. “The guys understood, but everyone else was local. ... I didn’t get the reps the other guys did throughout the season. They were getting together 10 to 12 times for practice, and I was just getting pieced in on game weekends. It wasn’t a great fit. But I enjoyed my time here.”

Buchanan now heads off to spend his summer with an outdoor lacrosse team, the Boston Cannons of Major League Lacrosse. He’s been with them since 2010. It’s all fun for Buchanan, but the indoor game supplies some extra pleasure for him because of the closeness of the fans and the excitement they provide.

The 30-year-old has a “regular” job working in the medical field, but getting to play for two lacrosse teams per year continues to give him great pleasure.

“It’s the best thing in the world,” he said. “You see guys on TV that can play a sport for a living and make huge amounts of money. The fact that they would jeopardize that at times makes you scratch your head. We love this. It’s a blast.”

The Bandits were successful in finishing off the Black Wolves without having to go through the potential agony of a mini-game. Had New England had won the regulation game, the series would have been decided by a 10-minute contest immediately following the end of the first game.

The Bandits learned all about that two years ago in Rochester, when they suffered one of the toughest playoff losses in history with an overtime loss in the mini-game.

Mark Steenhuis of the Bandits remembers it well.

“It was tough,” he said. “It was in Rochester. That’s a building that we haven’t had too much success in. I felt that we did a great job of playing them, getting some momentum in their building. ... We had a second chance to win, but we came up short. It was definitely disappointing, heartbreaking. Anytime your season ends against one of your biggest rivals, it stinks.”

That was the only time in team history that the Bandits were knocked out of the postseason with an overtime goal. They did drop one-goal decisions to Toronto in 2011 and 2012, and a 14-13 game to Rochester in 2007.

Buffalo now plays in a best-of-three final – with no mini-games.

Budd Bailey– Budd Bailey is a retired reporter and editor from The Buffalo News. He has served in a variety of roles in Buffalo sports in the past 40+ years, including reporter, talk-show host, baseball announcer, and public relations staffer. Budd has had 11 books published.