These are the components of The Elvis—a dessert so exceptional I can’t remember anything else I ate at the meal it capped. And that is saying a lot, considering it was served to me at The Black Sheep, which nightly turns out some of the most interesting and well-executed plates in Buffalo.

The allure of The Elvis, which is not a current menu item, did not lie in its novelty. Chocolate, peanut butter, and banana is not a unique combination, and bacon no longer surprises on dessert menus. Rather, it was pastry chef and Black Sheep co-owner Ellen Gedra’s skill at manipulating those elements. Her appreciation for the transformative, taste-punctuating powers of salt and her judicious use of sugar left an indelible impression. 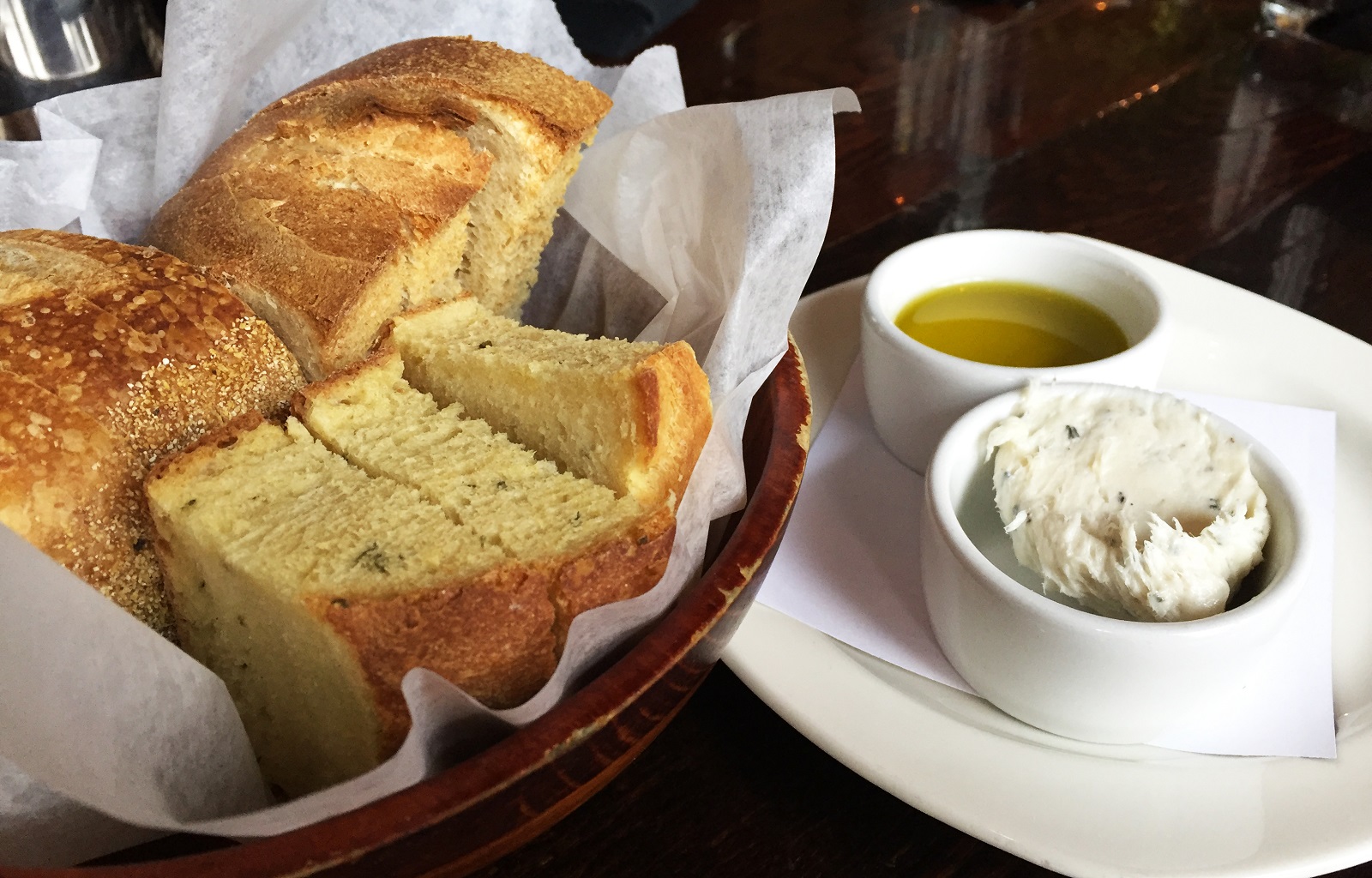 At The Black Sheep, Ellen Gedra's bread is served with with olive oil and burro di chianti, whipped, seasoned pig fat. (Caitlin Hartney/Special to The News)

Whereas many kitchens resort to cloying, one-note renditions of dessert menu standards, Gedra doesn’t mask ingredients with unrestrained sweetness. In the right hands, cocoa and peanuts—even butter and cream—can express a stunning depth of flavor.

Gedra’s sticky toffee pudding, rich date cake soaked in hot, buttery caramel sauce under a drift of softly whipped cream, has been called the best dessert in Buffalo. But her less acclaimed stuff shines as brightly.

[Read the dining review of The Black Sheep]

Where sugar is integral to the task at hand, Gedra expertly coaxes the stuff to more interesting manifestations. That bacon-studded caramel? It was taken to perfectly shy of burnt, which allowed the sugar to reach its full toasty, nutty, pleasantly bitter potential. The overall effect was a dish as savory and thought-provoking as any appetizer or main course.

Between the bread basket and dessert, Gedra creates the opening notes and the culinary coda for most Black Sheep diners. First and last impressions matter, not just in dates and job interviews, but memorable meals. Yet it’s not uncommon for restaurants to operate as if the inverse is true—as if a strong entrée can singlehandedly carry the dining experience. At some restaurants, that means not giving guests’ first touchpoint—bread service, in many cases—or final touchpoint—dessert, if all goes well—the attention they warrant. 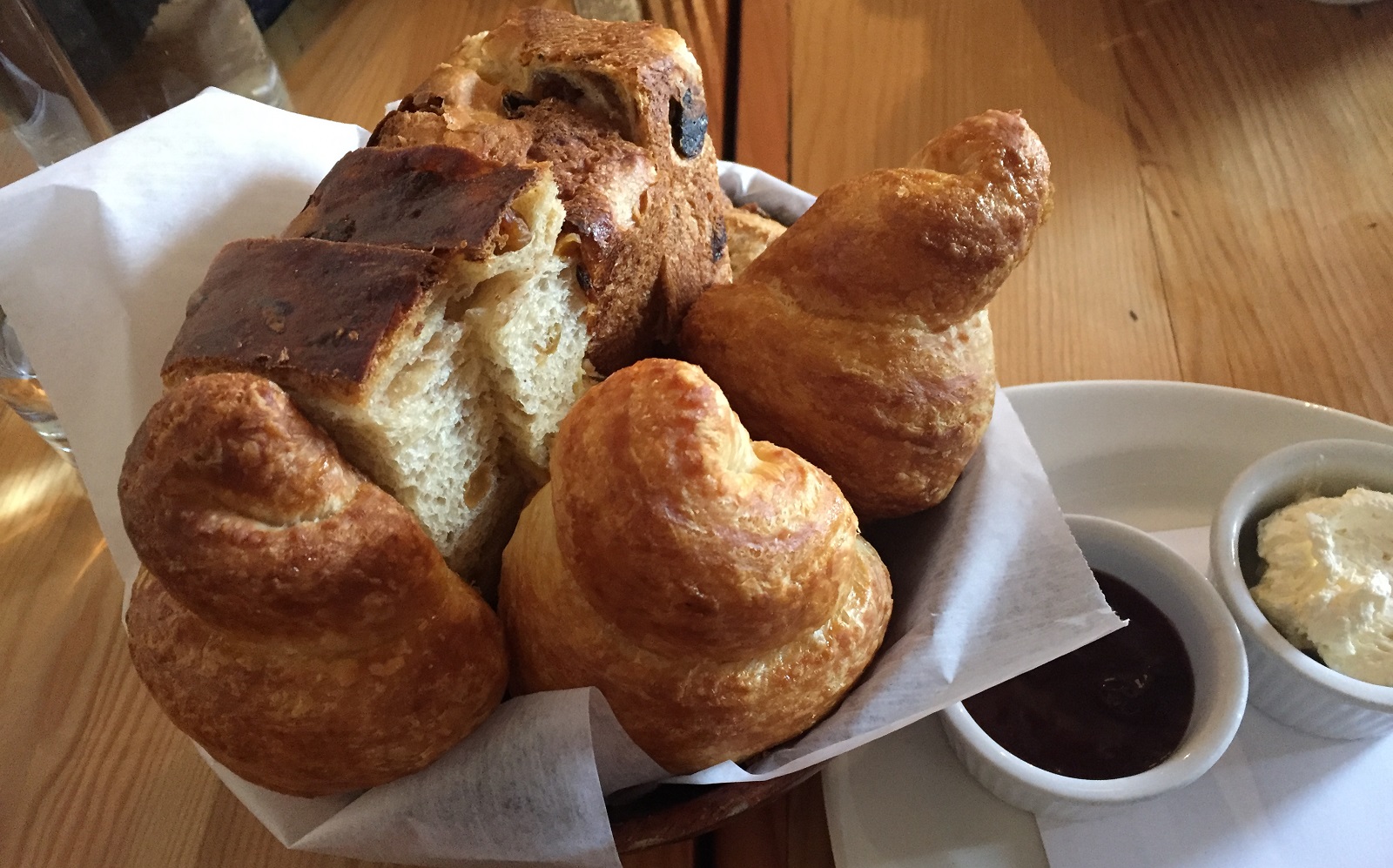 Not so at The Black Sheep. Gedra operates the restaurant with her husband and business partner Steven, who helms the kitchen. As the mastermind behind the restaurant’s deft use of local produce and whole-hog approach to menu building, Steven has rightfully earned accolades for himself and the restaurant. But it’s Ellen’s quieter, carb-intensive handiwork—not just desserts and bread, but also all of its brunch pastries—that have the potential to make or break guests’ first and last impressions. Hers is a weighty role, even if it is not typically center stage.

Nor is it her only role. As small business owners, both Gedra and Steven wear many hats. For her, that means a dual identity as head baker and general manger, while Steven more or less serves as the restaurant’s public face in additional to executive chef. It’s a natural division of labor that works well for this husband and wife team—one that Gedra compares to deciding who in a marriage takes out the garbage and who empties the dishwasher. 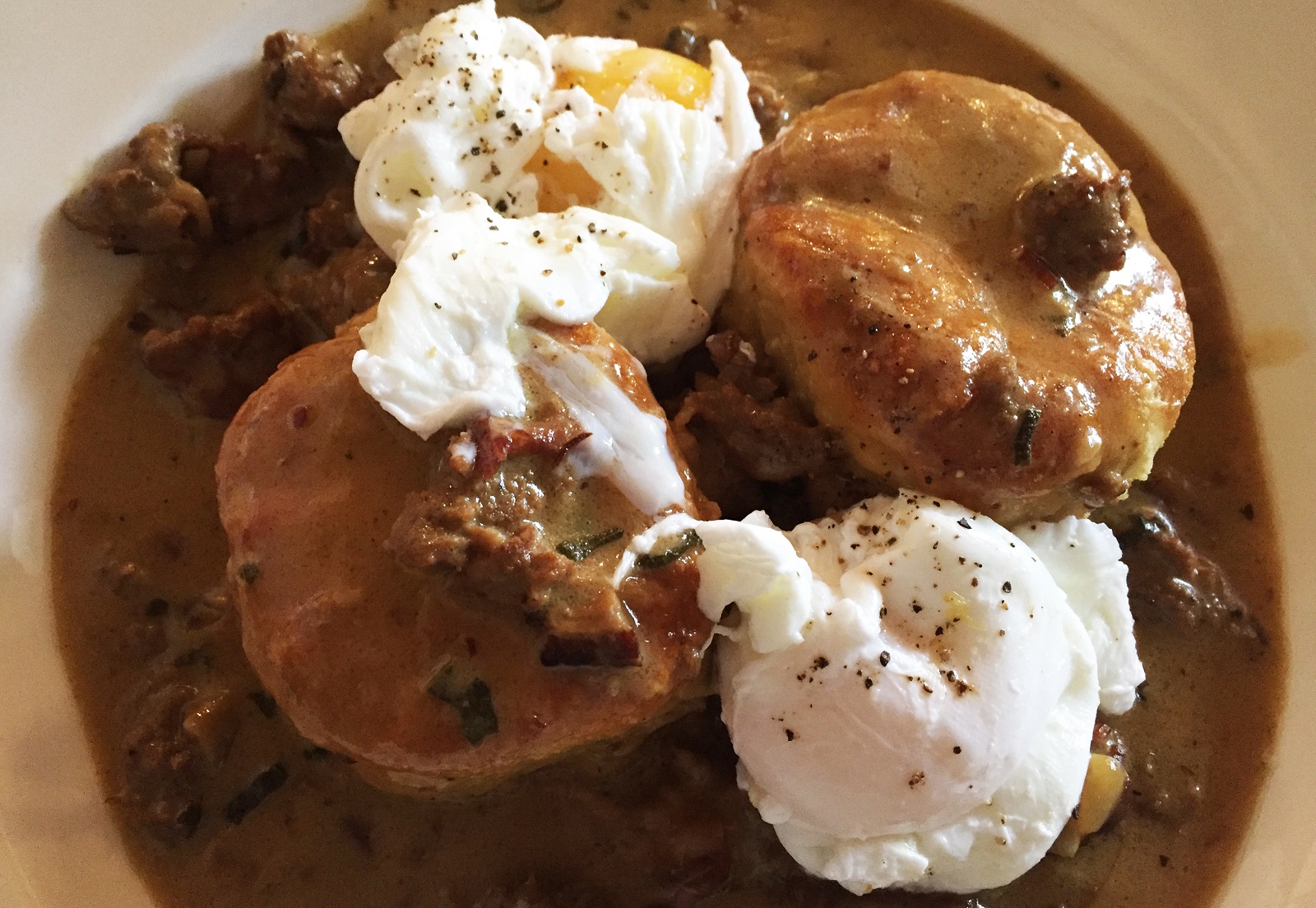 Being part owner also influences her craft. Not only does she have a deep personal and financial stake in her customers’ happiness, she also has free rein to run the baking program as she pleases.

“I try to walk the line between [what I like and] placating to what everyone wants,” she admitted. “And I do stuff until it gets old or until we get something cool in.”

Gedra says she likes to play with the high-quality and seasonal ingredients the restaurant has in house, including premium coffees and teas and herbs like thyme, sage, and basil. Even robust, decidedly savory ingredients have made their way into Gedra’s desserts. On the menu at the end of March, she featured a blue cheese bread pudding with beets, hazelnuts, dark chocolate, and red wine. 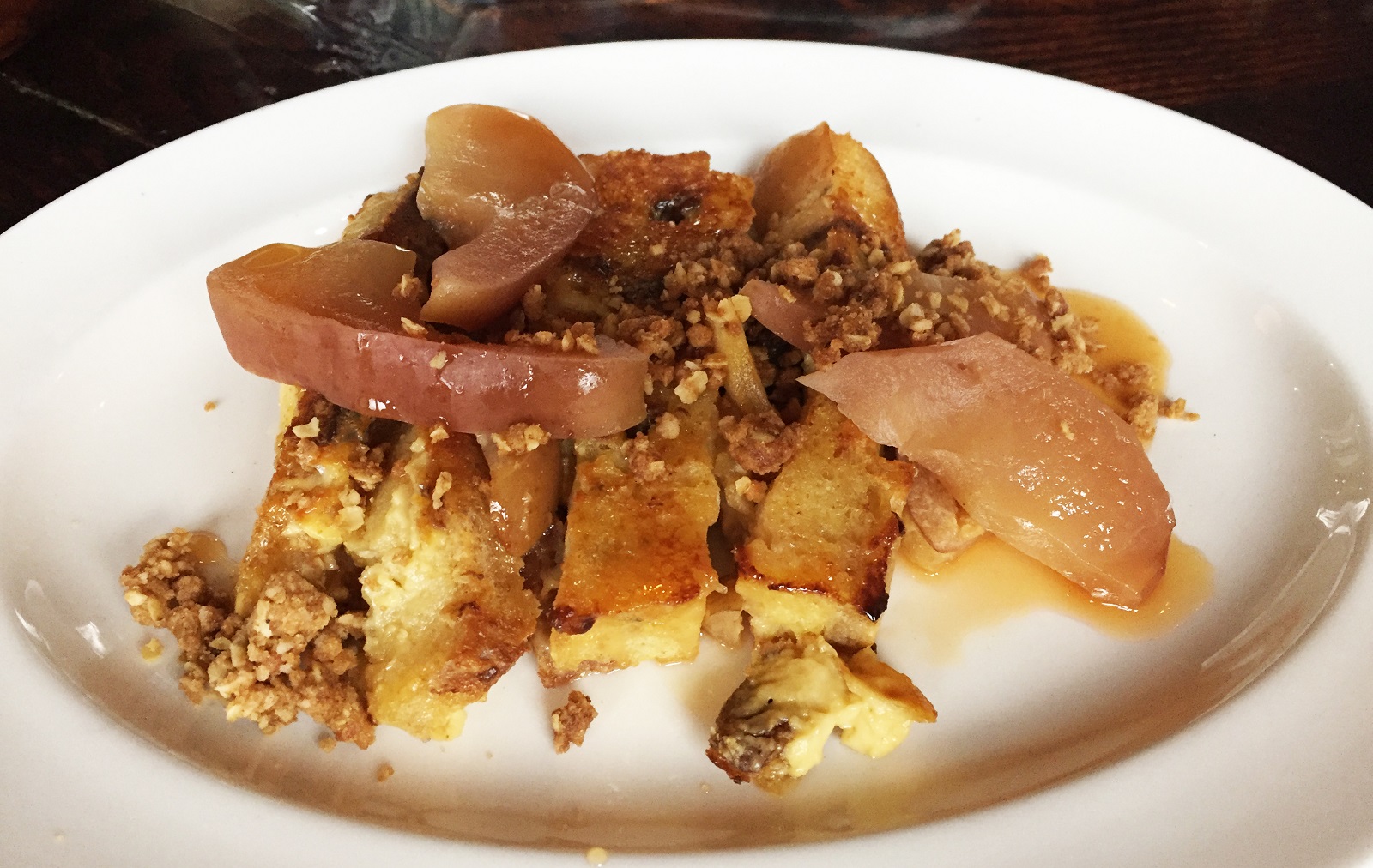 Gedra's commitment to using local fruit means dishes like this apple bread pudding with candied hazelnuts and cider syrup in the winter. (Caitlin Hartney/Special to The News)

Her commitment to seasonality has its drawbacks—namely, limited access to fruit in the winter. Mostly she relies on local apples and pears as well as anything she was able to preserve in the warmer months. But despite the challenges it poses, Gedra says it’s her ability to adapt to the seasons that sets her apart—as well as her commitment to making everything from scratch using the raw ingredients on hand in The Black Sheep kitchen.

“I don’t buy anything. I feel like it’s cheating if I don’t make it. I don’t want to sell somebody else’s product.”

[Read more about New-School Buffalo restaurants like The Black Sheep]

It’s a matter of integrity that precludes her from relying on purveyors for processed or refined products, even if that means a final plate that looks more homey and organic than perfectly wrought. And it’s a mindset she shares with the rest of The Black Sheep kitchen.

“That’s our mentality. Yeah, we can buy great bacon. But maybe we can make better bacon. So, let’s try.” 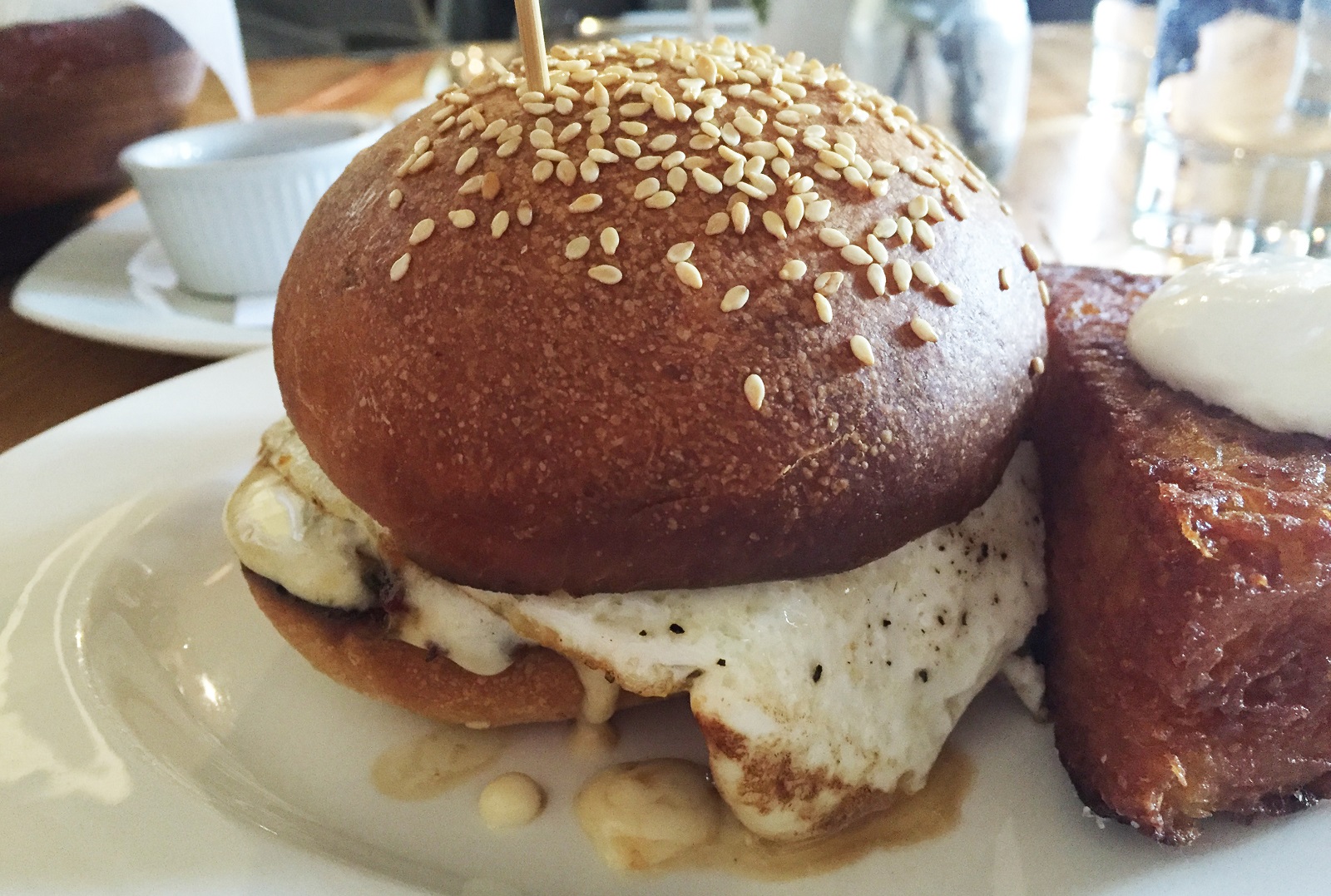 The Black Sheep's version of a sausage, egg and cheese biscuit with housemade hash browns. Ellen Gedra made the bun, of course. (Caitlin Hartney/Special to The News)

At Sunday brunch, which The Black Sheep recently reinstated after a hiatus, she shoulders even greater responsibility. Gedra estimates nearly three-quarters of that menu—from the sesame bagels, biscuits, and sticky buns to the pancakes and every component of the “Game of Scones” pastry basket—is her doing. Essentially, if it is made of flour, she had a hand in it, requiring her to begin exhaustive hours of brunch prep work as early as Thursday each week.

Gedra has proven she has the chops to live up to the task. She slung pastry at a high-end restaurant in Boston and as a private chef for a family in Nantucket before opting to hone her bread skills at a small bakery, where she worked long, hard hours for little pay.

Her temporary sacrifice, it seems, has paid off in droves. Today, Gedra’s prowess with flour and butter is its own reason to visit one of the best restaurants in Buffalo. 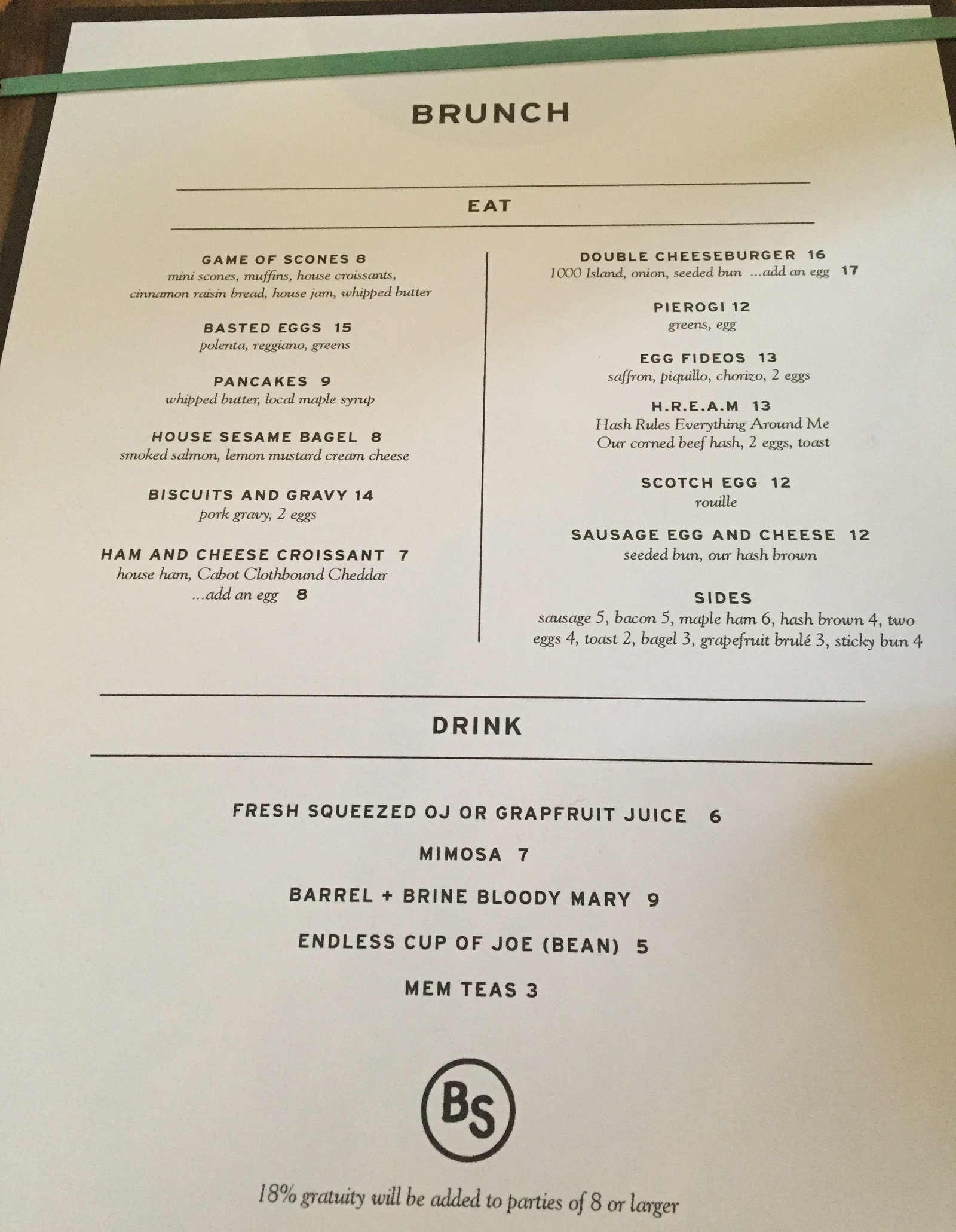 A recent brunch menu from The Black Sheep. (Caitlin Hartney/Special to The News)