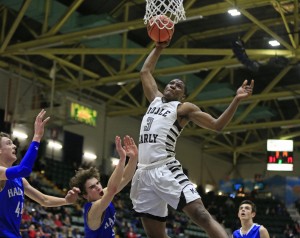 Everyone in Western New York knows Canisius’ Stafford Trueheart and Middle Early College’s Gary Foster are special talents. Those around the state have taken notice, too.

The two All-Western New York first team selections were named Players of the Year in their respective class by the New York State Sportswriters Association.

"It's a great honor to be given this award," Trueheart said. "I know there are a lot of great players in Class A and I'm honored to be named co-Player of the Year."

Trueheart is the second straight Canisius basketball player to be honored as state player of the year. LaTerrance Reed earned the honor last year after helping the Crusaders win the state Class A Federation title.

Foster captured Player of the Year honors in Class C to cap a season in which he earned state tournament MVP honors for leading the Kats (20-7) to their first state title since 2010. The 6-6 Foster averaged a double-double for the season (19.5 ppg, 15 rpg, 4.2 blocks) and put on a show during the state final four in Glens Falls. He 23 points and 17 rebounds in Middle College's 82-40 rout of Haldane in the title game.

Only seven players from Class AA schools in the area made the list. Jamestown's James Rojas earned a spot on the third team. Williamsville North's Maceo Jack, who shared ECIC I Player of the Year honors with Rojas, was named to the fourth team. Jack will attend St. Thomas More, a prep school in Oakdale, Conn., next season.

Division I prospect Jordan Nwora, who announced he will attend Vermont Academy, a prep school, earned a spot on the all-state Class A second team. The Park senior recently received an offer from Connecticut to go along with other major offers he has received.