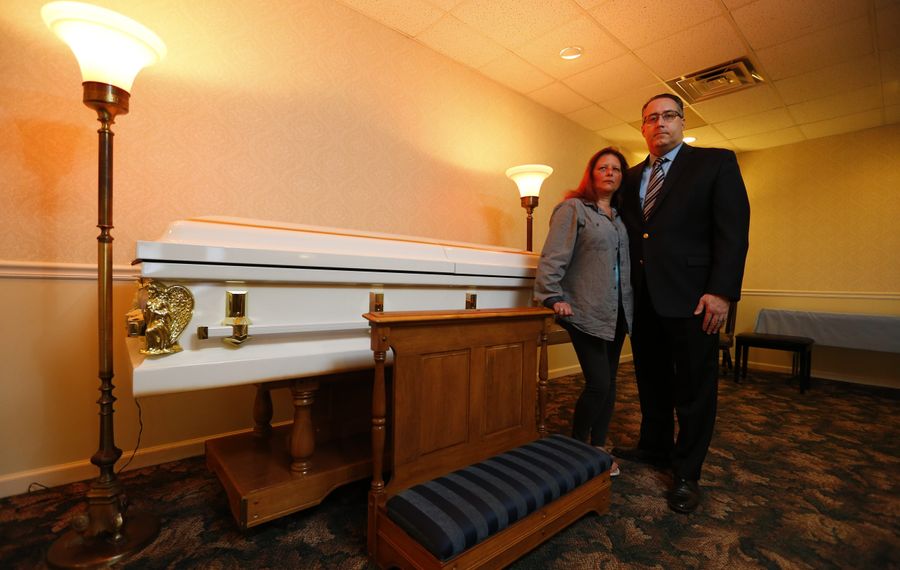 The young man walked into the funeral home to say goodbye to his friend who had fatally overdosed on heroin, but he appeared spaced out.

“He’s high,” the mother of the dead man said to herself as the mourner approached in the receiving line.

“Honey, I forgot your name,” she said to him, trying to make conversation.

He stared past her and said nothing.

What happened next shocked not only the grieving mother who had tried many times to help her 26-year-old son kick his heroin addiction over eight years before he died on Easter Sunday, but the funeral director as well.

The young man walked up to the coffin, leaned into it and licked the cold face of Mark A. Jack. He then stumbled and head-butted the corpse.

“I thought to myself, this kid is going to be next,” said Tricia M. Costantino, Jack’s mother.

Two other mourners dragged the 23-year-old man out of the wake. It turned out he had consumed a mix of alcohol and prescription medication, police said. He was not overdosing, just stoned, and was turned over to a parent.

In the last 12 months, Charles A. Castiglia, president and owner of Lakeside Memorial Funeral Home in Hamburg, said he has handled a dozen funerals for young people who died in the opiate epidemic and these deaths are taking an emotional toll on him and his staff. He said he hears from other funeral directors at state and national gatherings that they, too, are experiencing the same psychological overload.

The opiate epidemic has reversed the natural order, as grief-stricken parents bury their children, when – at least most of the time – it should be the other way around.

As overdose deaths continue at a meteoric rate – Erie County is currently averaging 11 drug deaths a week – the deaths are testing the mettle of funeral directors as well as drug treatment counselors and members of the clergy whose vocation it is to console relatives and loved ones.

Before last year, Castiglia said it was very rare for him to handle an individual who had died from opiates. It happened maybe once every 10 years.

But in the last year, that changed as the death toll skyrocketed when drug users started purchasing more heroin spiked with fentanyl, a high-potency laboratory-produced opioid.

During a wake last December for a young person who had died of an overdose, Castiglia said his staff watched as police officers discreetly entered his funeral home to make an arrest.

“The police had been able to access the cellphone of the young man who died, and they had determined who his dealer was,” Castiglia said. “The police came in plain clothes to the funeral home and there was a line of mourners and they arrested the dealer right out of the line.”

But nothing compared to the evening of March 31, when the stoned friend of Mark Jack showed up and licked his face.

“This is a tragic death, but right now I am (teed) off,” Castiglia said as he began the funeral service. “How dare one of you come to this funeral home and overdose at a funeral for this family who lost their son to a drug overdose. You could not be more disrespectful to them.”

The paid death notice that appeared in The Buffalo News stated: “Jack - Mark A. March 27, 2016 of Hamburg, NY. After an 8 year battle with heroin addiction. Beloved son of Tricia (Robert Rindfliesch) Costantino....”

Unlike others who have lost loved ones, Costantino said she had no reason to feel shame over her son’s death.

During his struggle, she said she was by his side, offering support. And when he fatally overdosed in her home, she wanted others to know the terrible consequences of addiction.

“I wasn’t embarrassed. My son taught me that. He told me that ‘it doesn’t matter how bad I am. It is part of me.’ ” Costantino said.

Unlike other drug users who often start on prescription pain medications and end up on street drugs, he started with heroin, she said.

“He didn’t have an accident and start on pain pills. He’s different than a lot of others. He basically jumped right into the heroin,” she said. “Throughout the last five years, between inpatient and outpatient rehab, he went about 20 times. He also did jail time and three shock incarcerations with the state.”

And what of the young man who disrupted her son’s funeral?

“Fortunately, I didn’t see him do the licking part, but I saw him stumble into the coffin. I had a million emotions at the time, but the strongest was sadness. I thought to myself, ‘This kid is going to be next,’ ” the mother said.

“It takes a personal toll on you as a person. It can be exhausting and draining. You have to go to the well of your own personal strength and your own faith to be able to minister to the families,” he said. “As a priest, we have to tend to our own physical, spiritual and mental well-being to effectively minister. You can’t give what you don’t have. Our prayer life sustains us, personal and liturgical prayer. It really grounds us.”

Karalus recalled a conversation he had with Bishop Richard J. Malone following the four opiate deaths.

“He wanted to know how things were going at the parish. I told him I’d had a difficult two weeks. I’d say he was a bit startled to hear of the frequency of the overdose deaths, and he was going to look into what the church can offer through Catholic Charities. It is really affecting families in the church, and he recognized this is an issue,” Karalus said.

Counselors who offer drug treatment and mental health services to the heroin addicts struggle to cope with the deaths of clients who could not be helped, said Anne Constantino, CEO of Horizons, a regional agency that serves those seeking a drug-free life.

“Prior to this epidemic, there certainly was the potential that somebody would lose their life, but now we are dealing with losing individuals, people that we know and their families, and it is heartbreaking. Some of our clinics have three deaths in a week or a weekend,” Constantino said. “It is just unprecedented.”

That is one reason the agency has a grief counselor on staff.

“We had used him for other things, but now we’re accessing him for grief counseling as needed by our people,” Constantino said.

It is no surprise that counselors and others would experience emotional fallout, said Dr. Gale R. Burstein, Erie County’s health commissioner.

“I can understand the sadness associated with the accidental death of a young person from a preventable cause. The shock of seeing a young person die is so horrible and people may not be prepared to see these numbers grow at an escalating rate. None of us are prepared for that,” she said.

Seeking out counseling for those whose professional duties bring them in contact with the opiate deaths is a positive step, Burstein said, “so that they can process their feelings and grief.”