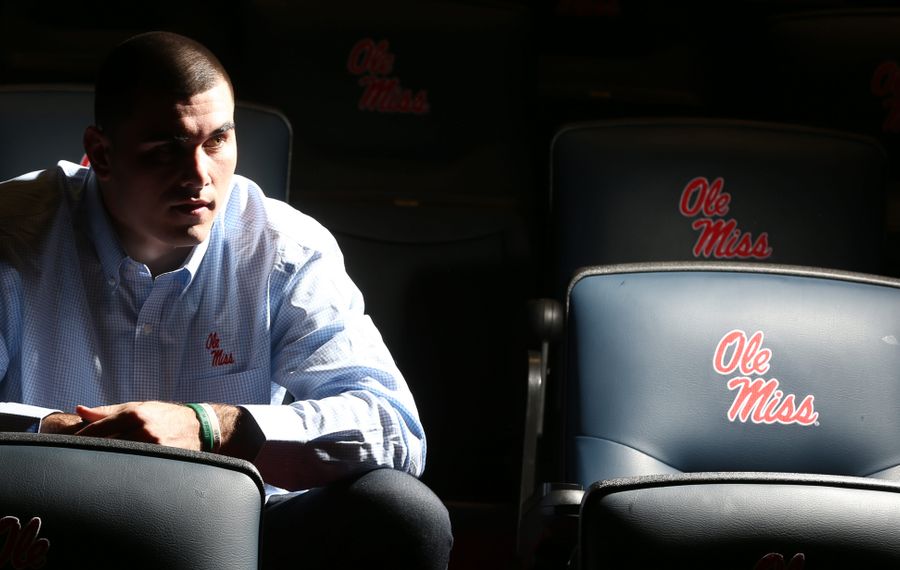 With the fallout at Ole Miss, maybe Laremy Tunsil can leave behind that gas mask.

In the days leading up to the NFL draft, we wondered if quarterback Chad Kelly had any regrets about returning for his senior season. Quarterbacks almost certainly were to be taken first and second overall. Draft analysts hyped others from a supposedly weak QB class as potential first-round picks.

I reached out to the Kelly camp last week and was told the St. Joe's grad remained secure in his decision, that another year of college grooming was practical.

But what will be left of Ole Miss football this fall after Tunsil's mushroom cloud?

The NCAA already was finishing up a three-year investigation of the Ole Miss athletics department, including allegations against the Sugar Bowl-winning football program, when Tunsil admitted Thursday night he took money from the coaching staff. Tunsil was suspended seven games last year for a different set of improper benefits.

Never mind the embarrassingly bizarre video of Tunsil smoking a bong through a gas mask.

The NCAA's investigation process is ambiguous and sometimes protracted. If the sledgehammer drops, it's possible Kelly will be gone by then.

Either way, Kelly and coach Hugh Freeze likely will endure a noxious environment in 2016. The offense doesn't look as dangerous either.

Kelly cannot. The NFL prohibits players from bypassing the regular draft to enter a supplemental. Kelly was eligible for this week's draft but passed.

Rex Ryan would have done backflips had Buffalo gotten its wish after drafting Alabama linebacker Reggie Ragland in the second round.

Ryan was ecstatic to add Clemson defensive end Shaq Lawson and Ragland to his unit. Buffalo then tried to trade back into the second round to snag Alabama defensive tackle Jarran Reed, tantalizingly still around eight picks after Ragland.

The Bills, however, weren't alone in their desires.

The Seattle Seahawks swooped in with a trade to take Reed 49th overall, the Bills' original pick before trading up to get Ragland.

The Bills traded the 117th overall pick and a 2017 fourth-round pick to the Chicago Bears for the pleasure of Ragland, who GM Doug Whaley claimed was good enough to draft 19th.

Buffalo didn't draft a quarterback Friday night, but Whaley said it was fair to surmise he would pull the trigger Saturday. The Bills have one fourth-, one fifth- and two sixth-round picks to go.

Over the past 30 drafts, Buffalo has selected a grand total of four quarterbacks inside the first three rounds: Todd Collins, J.P. Losman, Trent Edwards and EJ Manuel.

Thursday night, the Dallas Cowboys called the Bills about trading up into the 19th slot to draft Memphis quarterback Paxton Lynch. Unable to convince the Cowboys to part with a 2017 first-round pick, the Bills gladly selected Lawson instead.

The Bills also fielded a call from the Denver Broncos, who eventually landed Lynch by trading with the Seahawks for the 26th overall pick.

Caldwell fended off multiple trade offers to take Florida State safety Jalen Ramsey fifth overall and then moved up two spots in the second round to get UCLA linebacker Myles Jack, a lightning rod as much as he plays like a lightning bolt.

Jack has a degenerative right knee issue that caused him to drift down the draft board, but is considered one of the draft's most explosive defensive players when healthy.

"We want to be great," Caldwell told Jaguars reporters Friday. "We've got to take chances.

"We've been pretty conservative in our time here and in our philosophy in drafting and in some of our free-agent acquisitions. There comes a point in time where we've got to close the talent gap, and you're not going to do that without taking risks."

In the previous four drafts, the Bills selected seven players from Florida State and at least two in three of those classes. The Bills drafted three Seminoles last year.

The best bet this year might have been kicker Roberto Aguayo, given Dan Carpenter's shakiness.

But the Tampa Bay Buccaneers rose 15 slots to 59th overall and made Aguayo the highest-drafted kicker since the New York Jets drafted Mike Nugent 47th in 2005.

One NFL talent evaluator told me at the scouting combine Aguayo was the only kicker worth drafting, but not until much later.

Aguayo is the most accurate kicker in college history, but he's not known for a long leg. He made five of his nine attempts beyond 40 yards last season and attempted only six field goals from 50 yards and deeper.

Williamsville North grad Glenn Gronkowski remains on the draft board, and no University at Buffalo player has been drafted entering Saturday.

Gronkowski, a fullback, left Kansas State with a year of eligibility left.