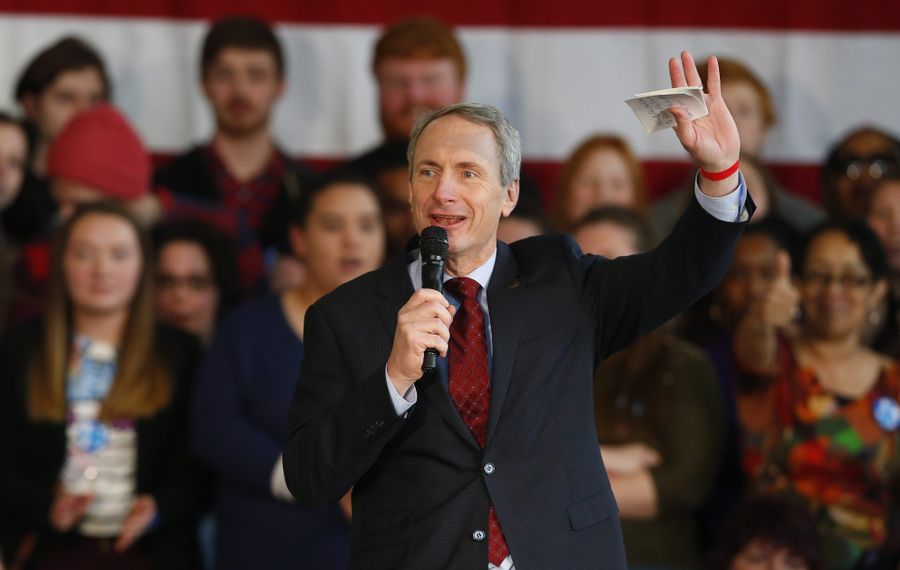 If Sean M. Ryan decides to run for the State Senate seat in the 60th District this year, Democratic leaders say, the endorsement is his for the asking.

But Ryan faces a complicated decision regarding the seat that fellow Buffalo Democrat, incumbent Marc C. Panepinto, is about to give up. And much of its surrounds what is playing out downstate.

Federal and state prosecutors in Manhattan are probing Senate fundraising linked to New York City Mayor Bill de Blasio. Now, Albany observers say the investigation is bound to hamper this year’s Senate fundraising, placing even more pressure on Ryan to raise the millions of dollars expected to be spent on both sides for the Panepinto seat.

Ryan, who has no connection to the current investigation, must weigh all kinds of uncertainties, including:

• Forfeiting his safe Assembly seat despite questions about which party will control the Senate come January.

• Determining his ability to compete without the key fundraising method of Senate Democrats, which is now under scrutiny.

• Wondering whether the same teachers unions and political consultants involved in downstate races that are being investigated will participate to the extent they did in 2014.

• Asking whether Manhattan-based U.S. Attorney Preet Bharara, who already has convicted Senate and Assembly leaders in the past year, will loom over this year’s electoral politics.

• Facing a grueling and expensive effort against Republican Erie County Clerk Christopher L. Jacobs, who has the ability to largely self-finance his effort.

None of this fazes Ryan, who says he will decide within the next two weeks. On Thursday, he rejected the premise that he needs any exotic fundraising methods and said he will successfully compete if he enters the race.

But he also said the investigation and the $6 million spent in last week’s special Senate election on Long Island highlight the need for campaign finance reform.

“Then no one would make a $100,000 contribution to a campaign and then see it 24 hours later go back to a candidate,” he said. “Millions of dollars are spent every year to influence elections. That part of the system needs to be fixed.”

But the fundraising probe already is dominating state politics. Just this week, three GOP senators from the lower Hudson Valley summoned reporters to criticize de Blasio and his 2014 fundraising for Senate Democrats.

Panepinto announced in March he would not run for a second term this fall, even though sources reported he was seeking donations for the coming campaign just days earlier. He said at the time that he wanted to devote more time to his Buffalo law practice.

The Buffalo News reported immediately afterward that the state’s chief ethics agency had launched an investigation into undisclosed complaints regarding Panepinto’s office.

While the probes by Bharara and Manhattan District Attorney Cyrus R. Vance Jr. have so far only tangentially touched Erie County, they appear to be intensifying statewide. The New York Daily News reported earlier this month that memos that it obtained originating at the state Board of Elections recommended a criminal probe of de Blasio’s 2014 efforts to establish a Democratic majority in the Senate.

It quoted Risa S. Sugarman, the Board of Elections’ chief enforcement counsel, as determining “reasonable cause exists” to warrant prosecution for circumventing legal donation limits in various upstate Senate races during 2014.

“The violations discovered by this investigation can only be described as willful and flagrant,” the Daily News quoted the Sugarman memo as saying.

Vance has since confirmed that he initiated an investigation into Sugarman’s concerns.

The Daily News has reported since last year that de Blasio’s operatives sought donations exceeding campaign contribution limits from wealthy individuals and unions to Democratic committees in Putnam and Ulster counties. The committees, which could legally accept the higher amounts, then allegedly transferred those funds to Democratic Senate candidates or illegally coordinated with the individual campaigns.

“Thousands of documents were produced,” Sugarman’s memo said, according to the Daily News. “Review of the documents revealed evidence of campaigns that were coordinated at every level and down to minute detail.”

The Daily News also reported in 2015 that de Blasio’s political operation targeted the Panepinto seat for its efforts, and reported last week that the board uncovered similar concerns in Monroe and Erie counties as those now under investigation. But it took no action because no one complained.

The Buffalo News reported last July that $100,000 in donations to the Erie County Democratic Committee for Panepinto’s campaign – involving some of the same unions and consultants now under scrutiny – was never recorded. The News noted that campaign finance reports show the United Federation of Teachers Committee on Political Education sent $100,000 on Oct. 28, 2014 to Erie County Democrats. Less than two months later, the local Democrats sent $50,000 to the Red Horse Strategies political consulting firm in Brooklyn, which was working for the Panepinto campaign.

County Democratic Chairman Jeremy J. Zellner said at the time that the committee never received money from UFT/COPE, a group linked to the New York State United Teachers union. In fact, he said he never reported the income and never cashed a check because he never received one.

A UFT spokesman addressed the situation in 2015 in an emailed statement.

“Because of campaign reporting requirements, the UFT reported on Oct. 28 that a $100,000 check had been cut for the Erie County Democratic Party as part of our statewide effort to increase the number of Democrats in the State Senate,” the statement said. “Before the check was sent on, the UFT decided to spend that money in other competitive races across the state. The check was thus never given to the Erie County organization.”

Zellner said in 2015 that he would not logically align with teachers unions in 2014 when they were instrumental in a simultaneous challenge to his party leadership.

The records of Red Horse Strategies are among those the Board of Elections subpoenaed, according to the memo quoted by the Daily News.

Zellner’s committee did not report the payment to Red Horse until January 2015. He also said he had no explanation about why the expenditure was listed under “office” costs, as opposed to the normal notations of “consulting” or “professional” expenses.

Meanwhile, three filing deadlines transpired after the contribution was first listed on the political action committee’s campaign finance reports as being sent to Erie County Democrats, but no effort to report its status was ever initiated until The News’ inquiries in 2015.

In a similar contribution, a separate $100,000 from the PAC sent just one week earlier to the Monroe Democratic Committee was received and recorded, according to campaign finance records.

Ryan says he will take into consideration all kinds of factors before deciding on whether to run for the Senate, even as several other local Democrats also express interest.

“Here is my bottom line, and the question I need to answer with certainty: Will I be a more effective advocate and voice for Western New York in the Assembly or the Senate?” he said. “Right now, that’s the question that needs an answer.”