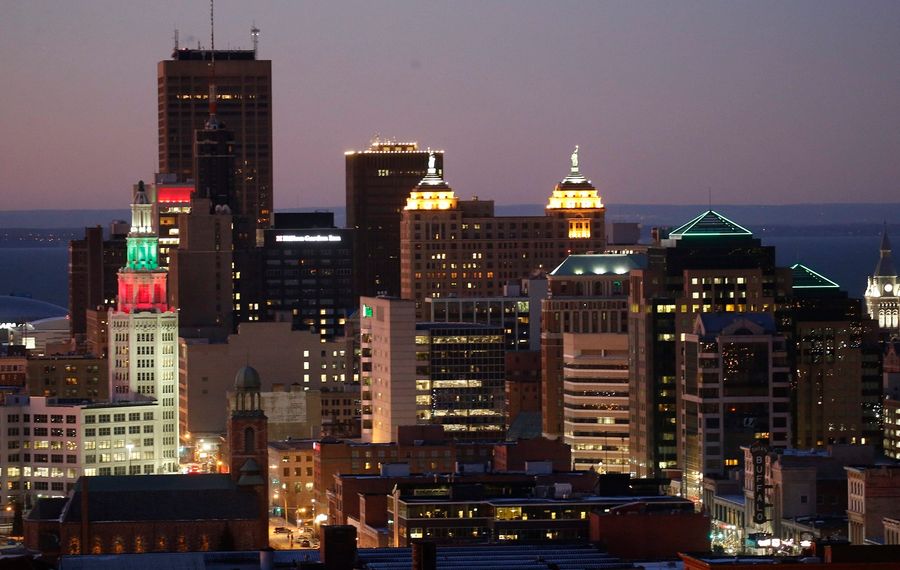 That’s a song worth warbling again, because Buffalo’s downtown, after years of stagnation, is starting to regain its old life. It is beginning, again, to offer something for everyone. If you’re heading to a game or to a show, or if your interest is history or art, you can choose destinations to round out your experience.

Head downtown, as Petula sang. Everything’s waiting for you.

• Lunch at the Swannie House (170 Ohio St.). Make new friends, but keep the old, goes the old Girl Scout campfire song. The Swannie House has been there since Canal District days and can hold its own among the newer restaurants.

With Ulrich’s short-lived closing for renovations a couple of years ago, the Swannie can now claim to be the oldest continuously operating Buffalo tavern.

• Explore the Pierce Arrow Museum (263 Michigan Ave.) just like Jay Leno did recently. Not into cars? You will be.

Ronald Cozzi, president of Old Editions Book Shop, looks through some of the 600 books in the collection of the late Eugene Musial, who amassed the largest collection of rare books printed in Buffalo in the 1800s, which is now for sale as a collection. (Derek Gee/Buffalo News file photo)

• The Mark Twain Room at the Central Library is free, and it houses a unique collection including the mantelpiece from Twain’s old home on Delaware Avenue, and a board game the master devised that nobody ever played because it was impossible. It’s on the main floor of the library, located on Lafayette Square.

• From the library, move around the corner to the Hotel @ Lafayette and the Pan-American Grill and Brewery (391 Washington St.), where a smiling Teddy Roosevelt will make you feel at home.

This long-dilapidated hotel has been meticulously restored, and it’s fascinating to wander and admire the decor and the murals on the walls. It lets you glimpse an earlier era.

• Late-night stop at the Colored Musicians Club (145 Broadway). Call 855-9383 to make sure they are open and that there’s a band playing.

The outside of the Colored Musicians Club, pictured in 2003. (Harry Scull Jr./Buffalo News file photo)

• Pack a picnic for the waterfront. Find picnic tables on Canalside and the Erie Basin Marina. Or simply spread a blanket on the grass. There’s often many free events at Canalside, including a nice array geared to families.

• You earn extra penny-pinching points if you get to the waterfront via the Metro Rail, in the downtown Free Fare Zone.

• OK, this is off the wall, but there’s this store in Main Place Mall, open 9 a.m. to 5:30 p.m. Monday through Saturday, called A Dollar. Dollar store connoisseurs, and we are many, hail this store as unique. You never know what you will find in its narrow aisles.

Look for gloves, reprint cookbooks, and admire the exotic mix of global spices.

For more free art, pop into the Western New York Book Arts Center and the CEPA Gallery (see under “For the Artistic”).

WNY Book Arts Center is a cultural gem on Washington Street in downtown Buffalo. (Don Nieman/Special to The News)

It’s open two days a week from 10 a.m. to 3 p.m. Thursday and Saturday. Call 849-0914 for info. Another under-the-radar option is the free Italian Heritage Museum in the basement of St. Anthony of Padua Church (160 Court St.).

• Restaurants have deals. The historic Century Grill (318 Pearl St. across from the Hyatt), celebrates Bacon Saturdays. At happy hour from 5 to 7 p.m., you can order a drink and avail yourself of free baskets of bacon on the bar.

Pabst Blue Ribbon beer may be had for $3 at Expo Food Market (617 Main St.; see more under “For the Artistic”).

Going to a show

Dinner and theater make for a full night out and there are plenty of options within walking distance of Shea’s Performing Arts Center, 710 Main St., and other venues so park the car once and enjoy.

• The Bijou Grille (643 Main St.) was founded in 1991 and toughed it out in downtown’s bleakest years. Nothing could be more convenient: You can sit in the window with your cocktail and Bijou Flatbread and time your exit flawlessly. No waiting around before curtain up!

• Another close-by constant is the lounge at E.B. Green’s at the Hyatt. Jackie Jocko is at the piano Wednesdays through Saturdays.

[Read: Jackie Jocko plays on despite loss of drummer partner]

Grab a seat in the lounge – you can dine there, too – and enjoy coffee or a drink before or after the show while keeping watch for celebrities: Three spotted personally by News staffers were Dave Matthews, Bruce Springsteen and Grace Potter. 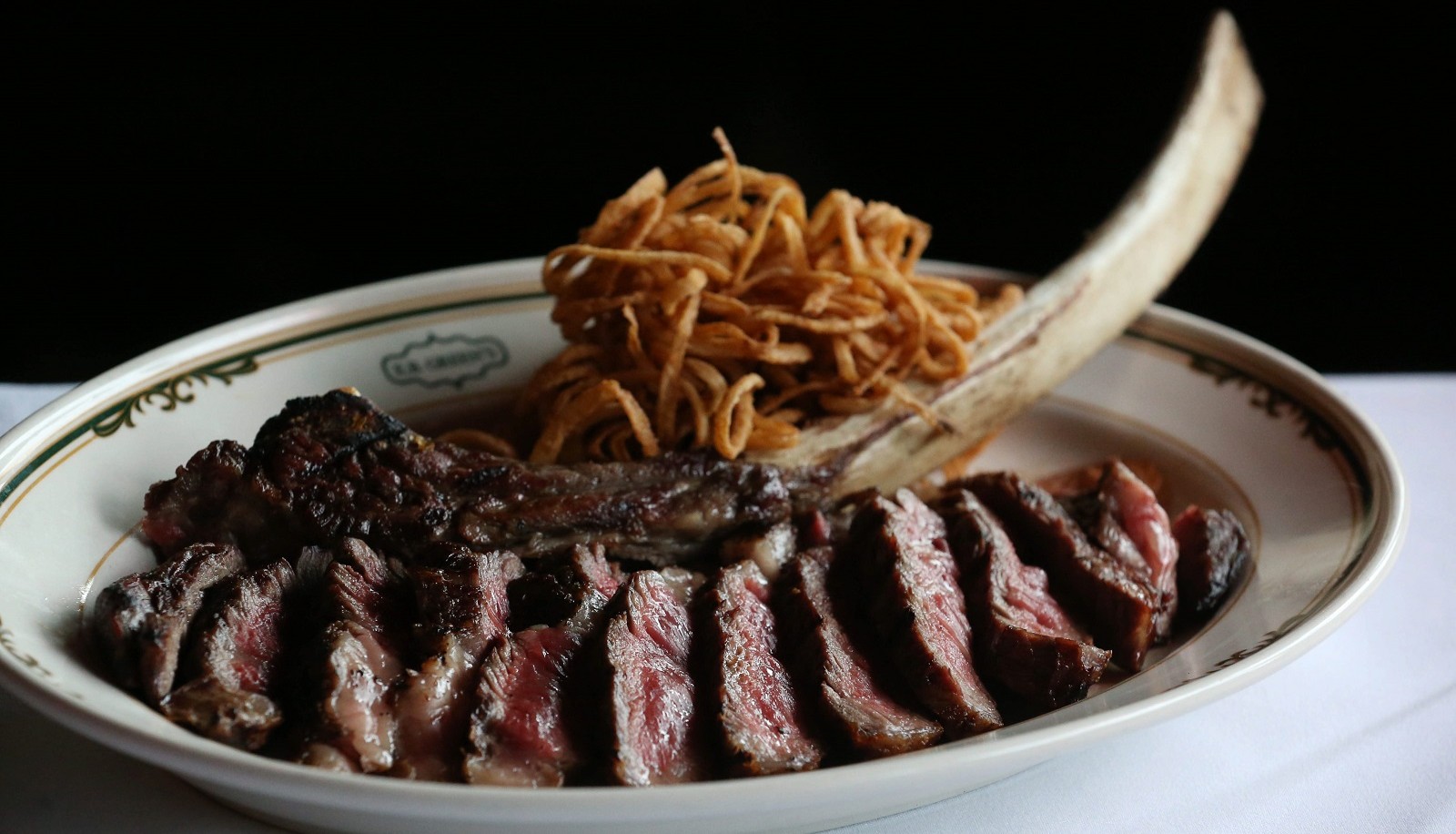 • Here are a couple of offbeat food options: Chennai Express (452 Pearl St.). News Critic Andrew Galarneau praised this place, writing: “There are 35 dosas on the menu, each one with the power to transform how you see Indian cuisine.”It is open 11:30 a.m. to 10 p.m. Sunday through Thursday and 11:30 a.m. to 11:30 p.m. Friday and Saturday.

Encore Restaurant (492 Pearl St.) has steak and sushi. The place caters to the theater crowd and can get you in and out in time for the show.

• After the show, no need to move that car. Toutant (437 Ellicott St.) was named one of Galarneau’s top new restaurants of 2015. Serving up what has been called Buffalo soul food, it has late-night hours and a terrific bar menu.

Dinosaur BBQ (301 Franklin St.) is open until midnight Thursdays through Saturdays, and has live music on weekends. 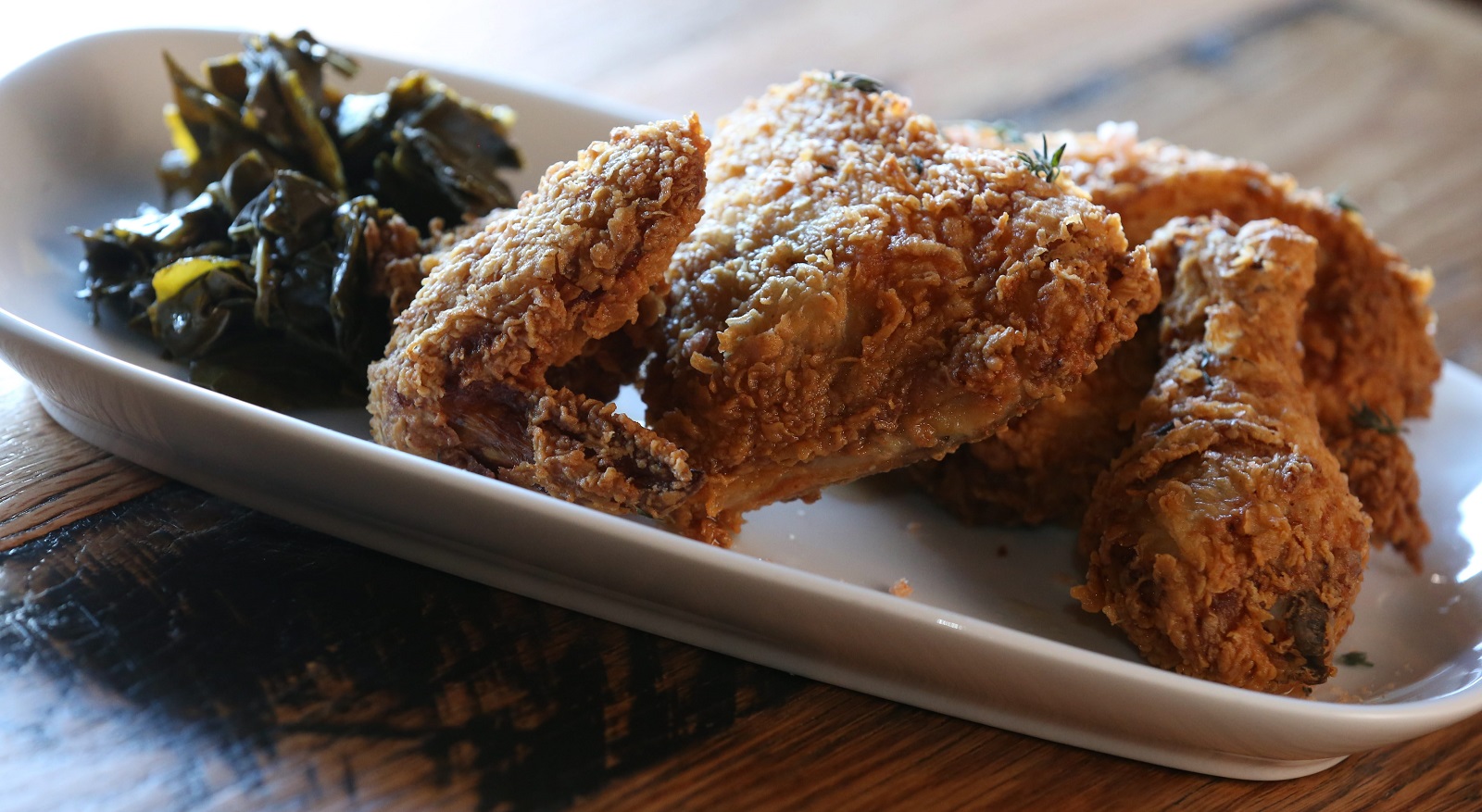 Here are ideas on how a sports fan may round out a game at First Niagara Center or Coca-Cola Field.

• Marvel at and take photos with a statue of the French Connection, outside of the First Niagara Center. The rendering of Gilbert Perreault, Rene Robert and Rick Martin, the immortal Sabres trio, was sculpted by Jerry McKenna after a photo by Ron Moscati of The Buffalo News.

Then head into the FNC to gaze at the Greater Buffalo Sports Hall of Fame, located on the first-floor pavilion area near the Sabres’ store. There, you’ll find all sorts of Buffalo sports memorabilia. It’s free to visit from 9 a.m. to 5 p.m. Monday through Friday and on event days from 9 a.m. through the event.

• Before there was a Tim Hortons coffee shop, there was the Tim Horton the NHL star and former Buffalo Sabre. His statue stands tall across the street from his namesake Tim Hortons at HarborCenter.

After getting a photo with the statue, head into the Timmy Ho’s, grab a coffee or hot chocolate and Timbits for the kids, and then peruse the walls where you can read about Horton and study a timeline that traces the history of Memorial Auditorium. It’s a hidden treasure and chronicles not only significant games but major concerts at the arena.

The statue of Tim Horton across from HarborCenter is another good look for the waterfront. (Derek Gee/Buffalo News file photo)

• (716) Food and Sport, on Washington and Scott streets, is fun, with its super-sized screen and hundreds of smaller screens. But it’s often not an option because it’s too jammed. Try Pizza Plant, newly opened in the Courtyard Marriott. It’s kid-friendly, yet has a full menu of craft beers.

Lagerhaus 95 (95 Perry St. in the Cobblestone District), specializes in German beer and foods but offers a lot of other options, too. Or walk over to hip little Ballyhoo (211 South Park Ave.), specializing in craft beers and cleverly presented gourmet sausages. 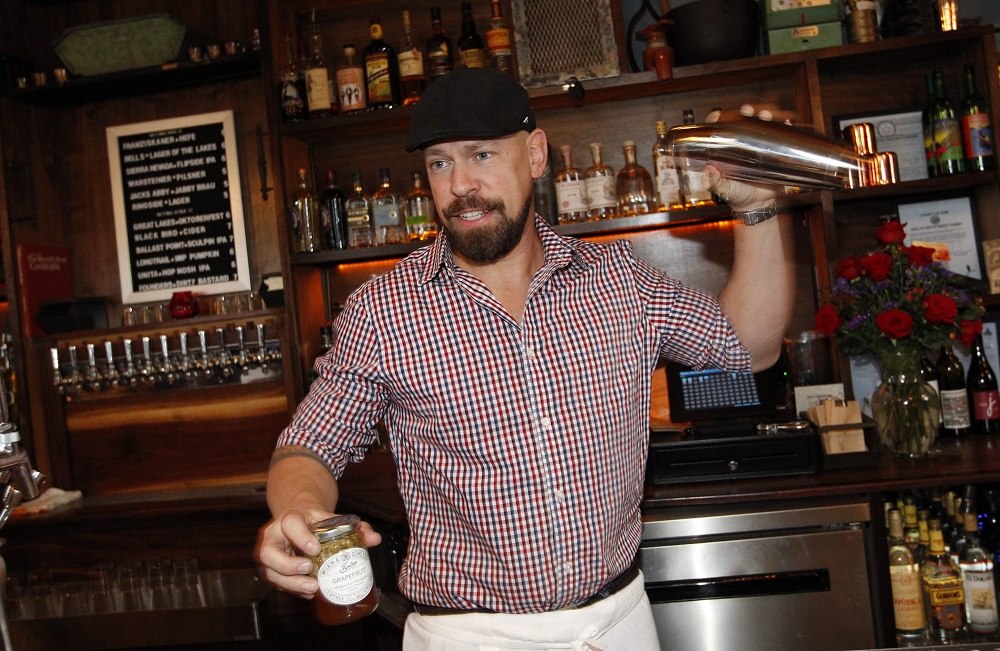 Tim Stevens, who excelled in San Diego as a bartender, returned to Buffalo to open Ballyhoo, right on the edge of the Cobblestone District. (Sharon Cantillon/Buffalo News file photo)

Here are options for lovers of the colorful and cutting edge.

It also has workshops and exhibits. Act fast and you can catch the current exhibit, which closes Friday, called “Mogu Mogu ~ Munch Munch,” colorful graphics by Harumo Sato that explore our relationship with food. Free.

The Homeless Jesus statue in Cathedral Park was turned away by several other cities before settling in Buffalo. (John Hickey/Buffalo News file photo)

• Make a pilgrimage to “Homeless Jesus,” lying on a bench in Cathedral Park on Church Street by St. Paul’s Episcopal Cathedral. Turned away from cities around the world, the statue by Tim Schmalz found its way to its present location in March 2015.

Even after a year here, the statue retains a novelty that transforms it into performance art. Linger for a while and watch people’s reactions to it.

• Consider lunch at Oshun (5 E. Huron St.), where you can admire the Art Deco murals on the walls. They date to the 1940s when a previous restaurant occupied the space.

The impressive decor inside Oshun, located at the corner of Huron and Washington streets in downtown Buffalo. (Sharon Cantillon/Buffalo News file photo)

• Another stylish food alternative: the brand-new Expo Market (617 Main St.). A new concept, it’s kind of like a gourmet food court, with Asian foods by Sun Roll, cocktails by Gypsy’s Bohemian Grove Bar, and you can get your healthy fix from Crush Juicery.