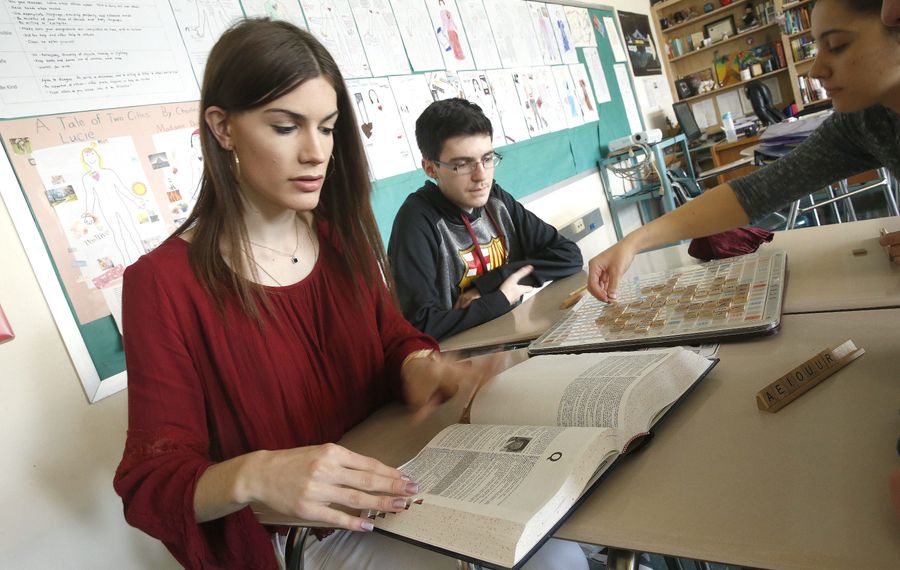 The first thing DJ Morley noticed about the girls locker room at Cheektowaga Central is how much nicer it is than the boys locker room.

“I said ‘Whoa, this looks a lot better, and there’s mirrors and good lighting,’” she said.

DJ was known to classmates at Cheektowaga Central High School last year as Dalton. That is when she was a tall, slender, gay freshman guy.

She returned in the fall for her sophomore year as DJ, a girl who likes boys.

“I came to school on the first day with my hair, full face and makeup, girl clothes, high heels, a purse. I came out with a whole bang,” she said. “A lot of people didn’t know who I was at first.”

And when she walked into school and the girls rest room, Cheektowaga Central joined a national debate about how – and where – transgender individuals fit into society.

Much has been written and said about North Carolina, which in March passed a law that, among other things, requires transgender people to use bathrooms that correspond to the gender on their birth certificate. Some entertainers are refusing to perform in the state and some major corporations are fighting the laws.

New York State came out with guidance last July on how to create schools free from discrimination against transgender and gender nonconforming students. That’s why the debate moved to the School Board room, as boards across the state discuss policies on bathroom and locker room use.

Some districts, like Cheektowaga and Hamburg, adopted policies with little discussion.

Others, like Lancaster, are having longer conversations with residents who oppose the proposals. While they are not required to adopt policies based on the guidance, districts are required to follow the law.

DJ, who got her first pair of high-heeled shoes as a freshman, was an unhappy young man, but never knew why.

When DJ was a younger boy, he would go to sleep, dreaming he was a woman walking down the wedding aisle, or carrying a child. The nightmare began when he woke up.

“You’d wake up and you have the short hair and the guy clothes, and the guy room,” DJ said. “You dreamt about one thing but you’d wake up in a whole different world, and you felt like you were dreaming in real life. It was a nightmare, and it truly was. You’re having your mind think one way, but your body is another way. It’s a tiring thing.”

When she was living as a boy, she knew she liked guys, so she assumed she was gay, DJ said. It wasn’t until she met with an expert in the field and underwent testing and soul searching that she realized she is a transgender girl.

The document on how to deal with transgender girls and guys sent to school districts last summer is one of several documents stemming from the Dignity for All Students Act of 2010, which protects students from bullying and harassment based not only on things like race, disability and weight, but also gender and gender identity. Amendments made in 1972 to federal law, known as Title IX, prohibit discrimination based on gender identity in federally funded education programs and activities.

At 16, DJ is 5-feet-11 inches tall, has braces and straight dark brown hair just above her shoulders when she’s not wearing extensions with tresses that reach down her back. She’s as comfortable wearing yoga pants, a hoodie and Crocs as she is wearing heels and a clingy dress.

After school started last fall, High School Principal Scott Zipp heard from some parents who did not like the idea of a transgender student using the girls rest room. He got more calls when DJ joined the varsity cheerleading team. He said conversations have cured some of the generational gaps of understanding.

“People are going to feel like you’re infringing on their rights, when you’re really just asking for your rights,” he told DJ. “We’ve got this wall in the middle we have to knock down.”

He said he has a job as a principal to uphold the rights of all students, and to follow the regulations of the Dignity for All Students Act. The state law requires districts to provide a safe and supportive school environment for all students.

Acceptance of the transition of one student from male to female may have started years ago, when the demographics of the Cheektowaga district started changing.

“We are a very diverse school in every way, shape and form, whether you’re looking at race, religion, sexuality, socioeconomic, anywhere,” the principal said. “When kids graduate here, they have an advantage over the kids that don’t go to such a diverse school. The kids that leave here, they communicate and work in a diverse situation all day every day and I think they truly have an advantage. Because it’s so diverse, everyone is accepted.”

Just one of the girls

School has changed over the years, and students, for the most part, don’t have a reason to strip down in the locker room, except in swim class, students and administrators said. But DJ knew her presence could upset some, and she would send someone into the locker room after school to make sure girls on the swim team had left before she got changed for cheerleading practice.

“I’ve seen DJ in her underwear, and she’s seen me in mine,” said senior Daja’vu Romer, who has gym with her. “She’s just like one of the girls. It’s not like we judge each other for the way we look.”

“It’s no different than seeing someone with a bathing suit on,” Zipp said. “I think once people really understood, they got away from ‘there’s a boy in the girls locker room.’”

Daja’vu is part of a group of students who made a video about DJ’s story as part of PBS NewsHour Student Reporting Labs.

“I think in a few years, it will be something regular,” Daja’vu said of transgender people in society. “It’s not going to be too surprising to us anymore.”

No one knows how many people are transgender. The figure most often used is from an analysis of studies by the Williams Institute, a think tank on sexual orientation, gender law and policy at the University of California Los Angeles Law School, which found about 700,000 Americans identified as transgender.

DJ is aware of curiosity about her, and will answer any question. The most common one concerns body parts. The answer is no, she has not had surgery yet, but she plans to when she is older. Before she started taking hormones about six weeks ago, DJ’s sperm was frozen so that she has the option of becoming a parent some day. After DJ started school this fall, a couple other students struggling with their gender identify have asked her for advice, she said.

Anti-discrimination laws may allow a student like DJ to use the rest room that matches her gender identity, but not everyone can accept that. It’s just not right to some people, including Texas Sen. Ted Cruz, the Republican presidential candidate who spoke in Buffalo earlier this month.

“Men should not be going to the bathroom with little girls. It’s nuts,” he said.

He’s not alone in his beliefs.

The Rev. Nelson McCall, pastor of Hillview Baptist Church, has spoken at every Lancaster Central School Board meeting since the board first discussed the policy in December. He is concerned about privacy, safety from predators and what the Bible teaches.

“What about the majority? The majority want to be sensitive. We need to love these people and accept them as people,” he said. “But they want more than that, apparently.”

While DJ is Cheektowaga’s first transgender student to come out publicly, Hamburg has had students out as transgender since 2001. Superintendent Michael Cornell said he believes some people assign intent to transgender youth that does not exist.

“They want to assume a boy trangendering and becoming a young lady is doing so because they want to gain entry into the girls locker room or girls bathroom,” he said. “I try to help people understand. My experience with transgender youth is that’s not their intent.”

The state suggests schools work closely with the student and family, and recommends the schools accept a student’s assertion of his or her own gender identity. That means using the pronoun the student prefers and protecting the student’s academic and health privacy. Unisex bathrooms and private changing spaces should be made available to those who request them, but they cannot be forced to use them.

“Every student, including transgender and gender nonconforming, deserves to feel safe and protected at school,” said Emily Terrana, western regional organizer for the New York Civil Liberties Union. “The hypothetical discomfort of one does not trump the present harm and trauma of another.”

DJ’s mother, Sandy, just wants her child to be happy.

“I think parents are afraid sometimes because they need to be educated on it,” she said.

The Morleys met with the principal two weeks before school started, to talk about how things would go when DJ returned to school as a girl.

She took it slowly at first, using the bathroom in the nurse’s office. She joined the varsity cheerleading team, and waited until members of the girls swim team were in the pool before she went into the locker room to change. She wanted the girls to have a comfort level and to feel safe while getting changed.

“I understand because it was so new,” she said. “But now people just don’t care.”

DJ said when she was younger, she was bullied and picked on repeatedly. Today there are students who don’t accept her transition, and they will turn around in the hallway and walk the other way. But that doesn’t bother her, because they’re walking away instead of punching her against a locker.

“Coming out as trans wasn’t hard,” she said, “but before I walked into the building, I was petrified. I was so afraid everybody was going to hate me, nobody would want to be friends with me. Who’s this weirdo? I was afraid, and my mom basically told me to keep my head up, stay confident, and walk sassy in my heels.”