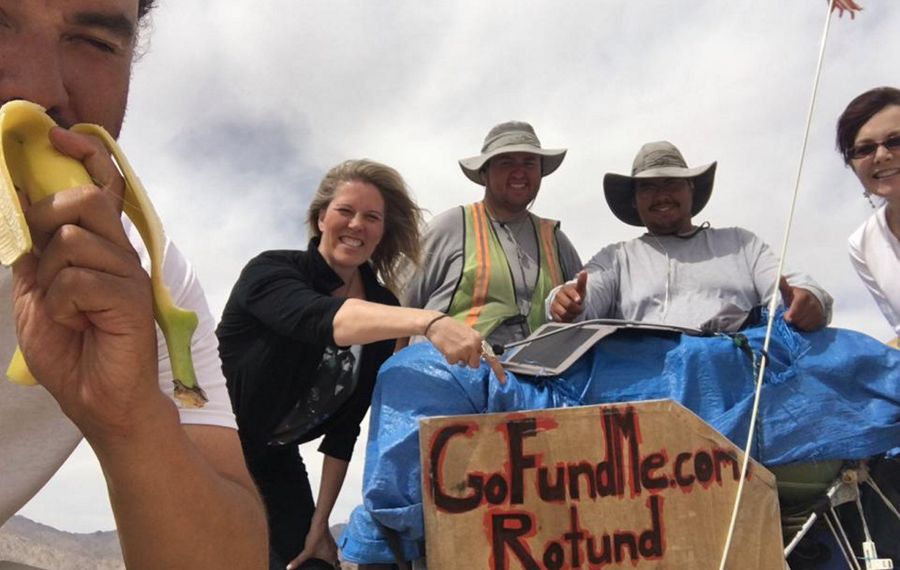 The last week has been a real change of pace for the three heavyweight Buffalo men who have spent almost a year walking from Riverside to Los Angeles.

Jason Rogers, 33, the frequent spokesman for his companions, brothers Joe, 33, and Chris Cooke, 32, are within striking distance of their goal of the Santa Monica Pier, but have stopped their progress so they can arrive to a welcoming crowd on Saturday.

“We wanted to set it up so we could end on the weekend, in case people who work wanted to come,” said Rogers. “We decided to slow down our pace when we were 100 or so miles away.”

If they had kept pushing at their usual rate, the three would have arrived at the pier Tuesday or Wednesday, he said. They worked out the final days of their 11-month trek after their train tickets home, which will have them leave Los Angeles on April 29 and arrive home May 3 were purchased by Marianne Schum of Lancaster. “Then we knew how much time we had to play with,” said Rogers.

Lisa Sievenpiper Davis and her husband Tim Davis are housing the three on Friday night in a hotel the couple, both of them Western New York natives, part-own. The hotel is less than 10 miles from the pier, so the three will have an easy walk on the last day of a trek that saw them travel as much as 26 miles in one day.

Lisa Davis is also organizing the welcoming party for the trio, publicized on Facebook under the name “2700 Mile Rotund Welcoming Party.” She posted, “Bring signs, noisemakers and wear your Buffalo gear!”

The trio have called their walk the “2,700 Mile Rotund Challenge” because Rogers once weighed nearly 500 pounds and was facing bariatric surgery to save his life. Chris Cooke weighed well over 300 when they started. Joe Cooke has always been the lightweight of the trio, at 200 or so.

Meanwhile, the Cookes and Rogers have met yet another new friend who has made their last few days enjoyable. On couchsurfing.com, they made an arrangement to stay with a man named Jackson in El Monte, Calif., some 30 miles from the pier. Jackson took Rogers and the Cookes sightseeing to Pasadena, to Griffith Observatory, and to the famous In & Out Burger, “which was delicious,” said Rogers. He took the walkers to Sequoia National Park, “our first national park,” Rogers said, and the trio posed with the largest tree in the world, the General Sherman Tree. They also climbed Moro Rock, where, Rogers said, “I definitely lost my wind going to the top.”

Although they are enjoying their time as sightseers, Rogers said it seems weird not to be waking daily with a route planned out and mileage to make. “It is strange, because the walk’s not done, but the delay is just logistics,” he said

With the end of their cross-country trek in sight, Rogers’ father, Steve Rogers of Buffalo, almost can’t express how proud he is of his son and the Cookes, who have all been friends since they met at age 8 or 9 when they attended the same church, Victory Assembly of God on Tonawanda Street.

Steve Rogers admits that he was one of the doubters and even encouraged the trio to walk to Rochester and back to see if they could do it, which they rejected, preferring to head directly west. Along the way, Steve Rogers said, “We encouraged them to go on but we told them, if you want to give up there’s no harm in it.”

At the same time, Steve Rogers said, “In the back of my mind, I know my son, when he makes up his mind about something, he goes for it.”

Anne Neville– A native of Albany, Anne Neville has a master's degree in public affairs journalism from Ohio State University, where she was a Kiplinger Fellow.