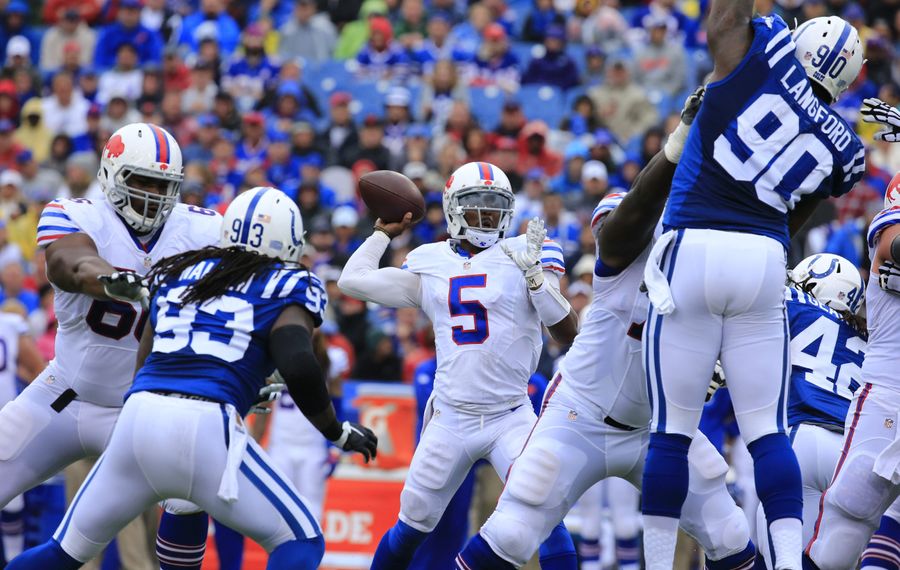 As early as the Senior Bowl, Doug Whaley made it clear the Buffalo Bills would "absolutely" consider drafting a quarterback early.

The general manager's plans haven't changed. He said "there's a very, very good possibility" the Bills draft a QB this year. Where? That's the question.

"When that will be, I can't tell you because I don't know," Whaley said at this year's pre-draft luncheon. "We always look at the value and the opportunity and it has to meet."

The stakes were raised yet again on Wednesday with the Philadelphia Eagles trading up to the No. 2 overall pick. Jared Goff and Carson Wentz, the top two quarterback prospects, are now expected to go 1-2 in some order. And, quite possibly, other QB-needy teams act accordingly, similar to the 2011 draft. That spring, Cam Newton (No. 1), Jake Locker (No. 8), Blaine Gabbert (No. 10), Christian Ponder (No. 12) all were gone in first dozen picks.

Could the two mega trades for No. 1 and No. 2 trigger a similar run in 2016? Paxton Lynch could now go earlier than expected. Maybe Connor Cook moves up. Maybe Christian Hackenberg. Anything is possible.

While repeating that Tyrod Taylor is the starter in Buffalo, Whaley again sounded like a GM ready to draft a quarterback, something the Bills have done only four times since Jim Kelly retired in 1997. In related news, the Bills haven't reached the playoffs since 1999.

The traits Whaley seeks in the position? "Accuracy, decision-making and ability to make people around them play better."

"And to lead," Whaley said, "and to have command of not only his offense, but of the huddle. So, those are some characteristics we look for."

In the past, Whaley has lamented that spread offenses in college are leading to a quarterback crisis in the NFL. He told the Wall Street Journal last summer that quarterbacks prospects' knowledge bases were so low he was “a little nervous about the long-term future of this game.” Asked about this Wednesday, Whaley admitted players aren't asked to do in college what they would be in the pros, though added "their mental is fine."

And director of player personnel Jim Monos — who has spoken to several quarterbacks this pre-draft process — doesn't have concerns.

"No, we haven’t noticed that," Monos said. "They’re really sharp. They know their offense, but they’re capable of learning the offense. These guys, they’re pretty coached up well."

Here are a few thoughts from the Bills on quarterbacks in this year's class:

Whaley on Carson Wentz's competition: "The best thing for Wentz, though, is he went to the Senior Bowl and played against some of the best of the best and he performed admirably. So you add that into the layer of your decision making, but you can't soley focus on that because he was playing against those inferior guys but he's playing with inferior guys as well so had to compensate. Again, it's just a layer of something you have to consider."

College scouting director Kelvin Fisher on Paxton Lynch: "I think he’s got a little ways to go, but he’s going to be a good player.”

Whaley on Cardale Jones: "His resume is short, you have to take that into consideration when you're making that decision. All these picks are a leap of faith, and that’s a greater leap of faith than a lot of other guys.”

If there is a run on quarterbacks early and the Bills try to hit on one in the mid-rounds, the job then gets much, much more difficult.

In the AFC alone, there are only two current starters (Tom Brady and Tyrod Taylor) who were originally drafted below the second round. Teams in need of a quarterback typically take one early. Nine in the conference were drafted in the Top 10. And 27 of the 32 starters in the NFL are first- or second-round picks, a staggering number.

Not many mid-round quarterbacks last as starters.

“That’s true, it’s a very a good point," Whaley said, "and that’s why I’ve got faith in these guys and our scouts. Will we find the next Tom Brady? We hope so. Can we find the next Andy Dalton? We hope so. So that’s where we come in. It might be a first-round pick, you never know, but we’ll be prepared for any scenario and how the draft comes to us and make the best decision on the player we think is the best value and right fit for us at the same time.”

The good news is the Bills don't need to act out of desperation. Taylor wasn't the chief problem in 2016, throwing for 3,035 yards, rushing for 568 with 24 total touchdowns and a 99.4 passer rating through a Pro Bowl first season.

So even if Buffalo drafts a quarterback in the first round, Whaley assured Taylor is the starter.

“Coach and everybody said since last year, Tyrod’s our starter," Whaley said. "Tyrod’s the guy we’re going into the season with."