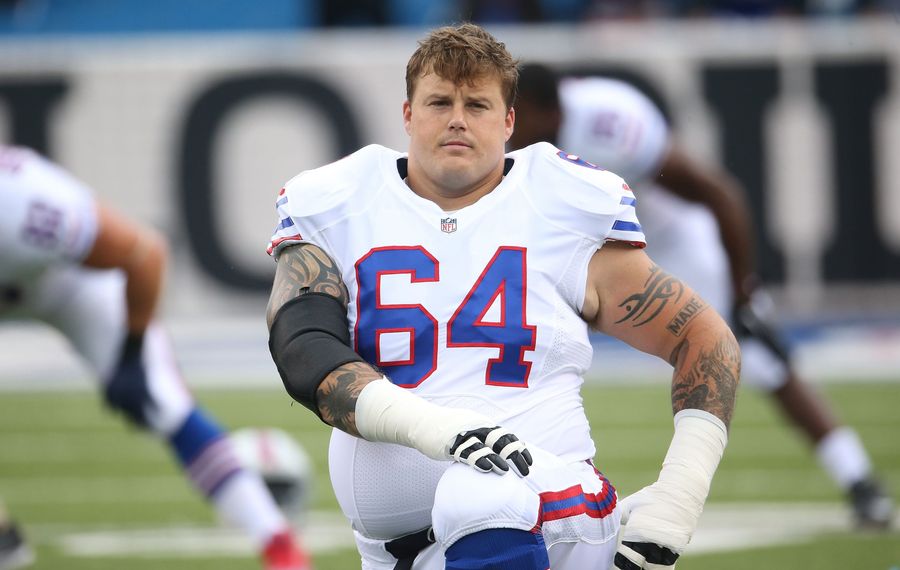 A year ago, it was all so different. Richie Incognito was an experiment. The Buffalo Bills were the experimenters. They chose to go where 31 other NFL teams wouldn’t by giving Incognito a spot on their roster. Beyond that, there was no touting that he was a part of the team. There was only the hope that he would behave well enough to be able to stick around and provide desperately needed help at offensive guard.

Flash forward to this week. At the start of the Bills’ voluntary offseason conditioning program on Monday, the club’s public-relations staff selected three players to stand behind a lectern in the ADPRO Sports Training Center to meet with reporters: safety Aaron Williams, quarterback Tyrod Taylor … and Incognito.

Satisfied he had proven himself as both a valuable player with multiple productive years left in his 32-year-old body and the consummate “good locker-room guy,” the Bills felt comfortable enough last month to give Incognito a three-year, $15.75-million contract to replace the relatively modest one-year, prove-it deal he signed in February 2015.

Now, they allow the former NFL outcast to be a primary spokesman.

“I found myself looking back on it (Monday) morning,” Incognito said of his 18-month exile from the league stemming from a 2013 bullying scandal with the Miami Dolphins. “I was really excited about getting into the building and being around the guys. Eighteen months ago, I didn’t have that. (For) 18 months, I was sitting on my couch and training on my own and to be back here, where I’m at now, it’s another milestone in this journey and another chapter that begins.

“I’m very excited to be around guys like (Eric) Wood and Tyrod and Shady (McCoy) and guys on defense, Marcell (Dareus), Jerry (Hughes), and just earning those guys’ respect. Being able to come out and compete with them, it’s a huge honor for me and it’s what motivates me every day.”

So does his past.

The money doesn’t appear to have made Incognito any less humble than he was when he arrived at One Bills Drive a year ago. Last January’s selection to the Pro Bowl as an alternate hasn’t altered an incredible work ethic that involves torturous workouts at his offseason home in Arizona.

Last year, no one in the NFL had more to prove than Incognito. He insists that his approach this year will be no different – that the fire still burns strong.

“I think (it’s) just having that beginner’s mentality, being able to reflect on where I’ve come from and what’s put me in a position for success and that is just coming in, grinding, working as hard as I can and doing everything I can to prepare to repeat and improve on the performance I had last year,” he said.

With limited salary cap space and the hefty cost to retain Incognito and left tackle Cordy Glenn, who received a $13.7-million franchise tag, the Bills weren’t able to spend big money for difference-makers in free agency.

Incognito and Glenn were rewarded for leading an offensive line that was the key to the Bills having the No. 1 rushing team in the NFL and improving from 26th to 13th in total offense. And Incognito knows that they and their linemates will need to perform every bit as well, and likely even better, if the team has any chance of achieving its endless playoff pursuit.

That’s where Incognito, the leader, comes in. He lays out the agenda for the offense’s path to improvement as thoroughly as any coach.

“I think we have all the pieces in place,” Incognito said. “I think the recipe for success is just us being more consistent, us putting more points on the board in critical situations. Last year, we got in these lulls where we had these spells of three-and-out and to be successful, you can’t do that in the NFL.

“We’re definitely going to hang our hat on the run game and Shady (LeSean McCoy) and the stable of backs that we have, Karlos (Williams) and even Tyrod when he gets the ball in his hands. They’re very dangerous, so I think just building and expanding on that, having Tyrod as the starter, will just add to the consistency and hopefully translate to a lot more wins.”

The “All In” slogan that Rex Ryan introduced to the team for the offseason is the coach’s clear response to the frequent public complaints his players voiced about his defense last season. But the message appears on the front of the Bills’ hoodies worn by offensive as well as defensive players.

As far as Incognito is concerned, it doesn’t stop with members of a defense that plummeted from fourth to 19th in 2015. “I think an integral part about being all in is learning from the mistakes we made in the past and the inconsistencies that we had last year,” he said. “We’re going to dive headfirst into this thing, evaluating everything we did right, everything we did wrong last year, and being cognizant of the fact that we didn’t finish ballgames, that we didn’t finish well enough to win a lot of ballgames that we should have.

“That’s huge. That’s part of the mantra and the credo of moving forward.”

No one on the team is more familiar with that concept than Incognito.

Last year, the Bills weren’t asking him to stand behind any lecterns to talk with reporters. If you wanted to talk with Incognito, you approached him at his locker. Incognito knew, just as with so many others around the team and the entire NFL, that the Bills were withholding judgment.

He admitted to being “very nervous” about returning to a locker-room setting after those 18 long months. He acknowledged that earning “trust and respect” was not a given.

“And now, even coming back in the building, it’s still a process where I have to prove myself to these guys and have to prove myself to where I’m at now and prove it to myself and stay on this good trajectory,” Incognito said. “It’s exciting getting back and knowing everybody and knowing the ins and outs and getting back with the staff, Rex and G-Ro (Greg Roman), so I’m excited.”

The Buffalo Bills are getting extremely thin at inside linebacker.

On Tuesday, they released Tony Steward, whom they made a sixth-round draft pick from Clemson last year. The team made the move official shortly after Steward revealed it via Twitter.

Steward’s departure leaves the Bills with only three inside linebackers: returning starter Preston Brown; projected starter and recent free-agent signee Zach Brown, who coach Rex Ryan said is the other starter as of now; and Kevin Reddick.

Steward appeared in nine games as a rookie. He was credited with one tackle and an assist.