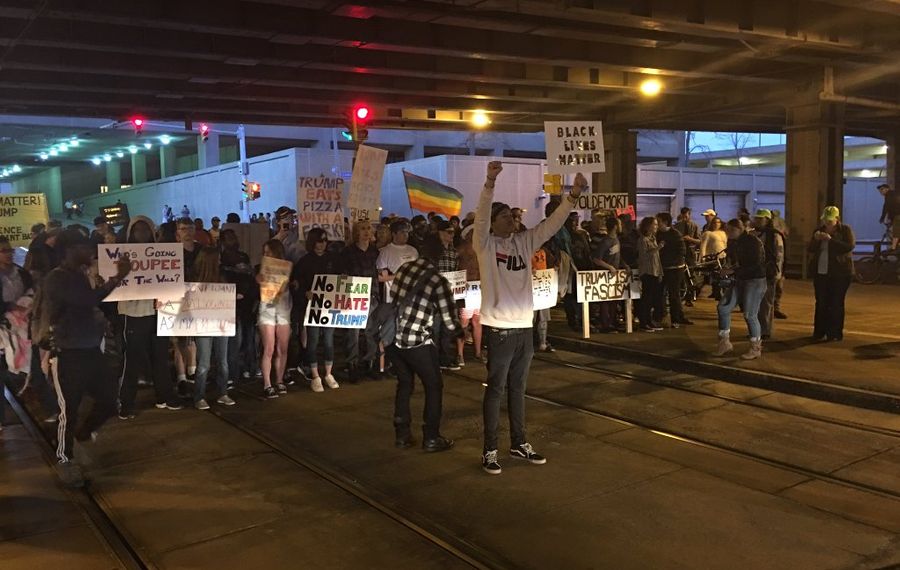 A Buffalo police officer stood at Washington and Perry streets downtown as a steady stream of people made their way toward First Niagara Center on Monday afternoon ahead of Donald Trump’s campaign appearance.

As thousands wound their way through the security outside the hockey arena, hundreds of others gathered in the “free speech zone” set up across Perry behind a metal barricade. A phalanx of police officers, many carrying long, wooden billy clubs and plastic cuffs, stood in a line in the middle of the road.

The protesters carried signs. They danced. They heckled. And they chanted.

“Love trumps hate!” was a favorite cheer of the crowd.

“We’re here to kill them with kindness and love,” she said.

While she did not give out many hugs to Trump supporters, she said she did gave a hug to an older, chubby sidewalk vendor selling Trump merchandise.

“He was all squishy,” she said with a giggle.

Marwa Abdulla, 23, of Lackawanna, came with her younger sister and cousin. The daughter of Yemeni immigrants, she said she came to see what the anti-Trump crowd would be like.

Among the protesters were striking Verizon workers who have received quite a bit of attention from Democratic politicians, including Vermont Sen. Bernie Sanders, who met with some of the strikers ahead of his rally in Buffalo last week, as well as Bill Clinton, who was stumping for his wife, Hillary Clinton, earlier Monday.

“We love the support,” said Tom Kirbis, a local customer service sales representative. “We’d love to hear from a Republican.”

During the evening, as more protesters filed into the free speech area, there were a few instances Monday evening when the discourse got nasty.

Some protesters berated police officers when they brought in extra barricades, calling them “pigs.”

But a few yelled comments.

“Get a job!” one Trump supporter shouted from across the street.

“What about Benghazi?” another Trump rallygoer said.

Going inside to the rally were two friends from Buffalo, Jeremy O’Brien, who supports Trump, and Cory Watson, a Clinton supporter.

Some protesters made their way into the Trump rally. They were escorted out to the boos of their compatriots outside.

“I made a sign that said he had small hands,” one of those protesters told The Buffalo News.

As Trump was speaking, a group of protesters broke off from the free speech zone and gathered over by the Metro Rail station. They tried to block a train, but police officers arrived quickly and moved them away.

Some arrests may have been made for blocking the Metro Rail track.

Michael Canfield of The News staff contributed to this report. email: mbecker@buffnews.com and lmichel@buffnews.com