There were no protests like the ones we saw when Hillary and Bill Clinton stopped here. No lines snaking outside like when Bernie Sanders popped in. And certainly none of the security concerns accompanying Donald Trump’s upcoming political bash – technically a political rally.

Instead, the Ted Cruz for President campaign discreetly slipped in and out of town for a made-for-television event Thursday, attracting some 300 people to a dignified town hall-type setting in one of the University at Buffalo’s more intimate theater buildings.

And he didn’t disappoint Thursday.

Cruz was asked: Does the constitution protect the unborn?

“Of course,” he said. “Any parent who has looked at a sonogram; it’s an amazing thing.”

Do you support the North Carolina law requiring transgender individuals use to bathrooms based on the gender on their birth certificate rather than their gender identity?

“The political correctness we have embraced – enough already,” Cruz said. “Men should not be going to the bathroom with little girls. It’s nuts.”

Cruz lunches at Charlie's, keeps Trump in his sights

On Buffalo's WBEN radio, the sound of a party in crisis

---
And on reducing the size of government: “I am campaigning on a flat tax, and abolishing the IRS,” Cruz said, with his plan for the Internal Revenue Service getting one of the biggest rounds of applause of the event.

The town hall meeting, held in the Katharine Cornell Theatre on UB’s North Campus, was hosted by “Meet the Press” moderator Chuck Todd, and recorded by MSNBC.

It was a contrast to the big and bigger Clinton and Sanders Buffalo rallies of the past week organized by political campaigns; and the even bigger rally Trump is planning Monday at First Niagara Center.

Thursday’s event was an MSNBC production.

It was MSNBC that invited students and community members, and asked anyone interested in attending to submit a question they would like to ask Cruz.

It was MSNBC that reviewed the questions and asked a small group of attendees to be ready to ask their questions of the candidate. 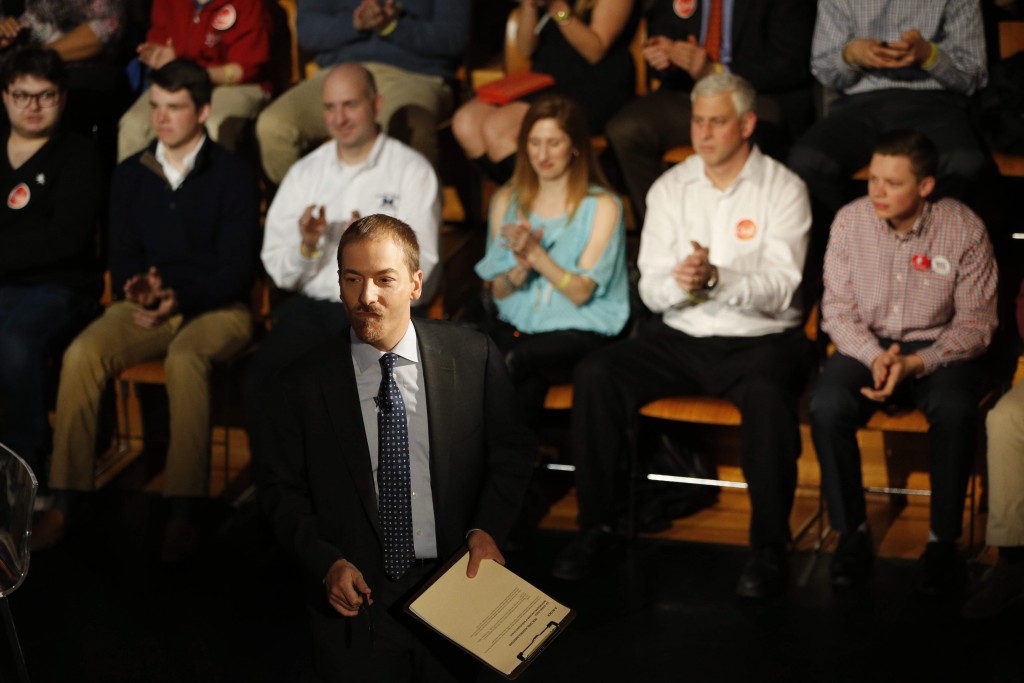 And it was the network that set the pace of the event, starting with Todd warming up the audience.

He talked about the late Tim Russert, a former “Meet the Press” host and one of Buffalo’s favorite sons. He talked about football and Rex Ryan, the Buffalo Bills coach who previously coached the New York Jets.

They did. In fact, Cruz got a standing ovation.

“God bless New York,” Cruz responded as he sat down across from Todd.

Todd asked Cruz if he had any chicken wings yet.

Wings for breakfast would be a bit much to handle, but they are a regular dinner entree on the campaign trail, Cruz responded.

More applause, and a bit more light banter before getting down to business.

Over the next hour or so, Todd lobbed one question after another at Cruz, talking about everything from economics, politics and birth control to Clinton, Sanders and Trump.

McCormack recalled Cruz led the 2013 filibuster that temporarily shut down the federal government. Why should people vote for someone who led a government shutdown, McCormick asked.

“People are frustrated and furious with Washington,” Cruz responded. “The biggest divide is not Republicans and Democrats. It’s career politicians. What we have now is not working.”

Cruz said he was taking a stand against the growing national debt, amnesty for illegal immigrants and President Obama’s health care plan back in 2013.

He said Republicans could have prevailed in 2013 if they had held together against Obama.

“I think those are issues that matter,” Cruz said. 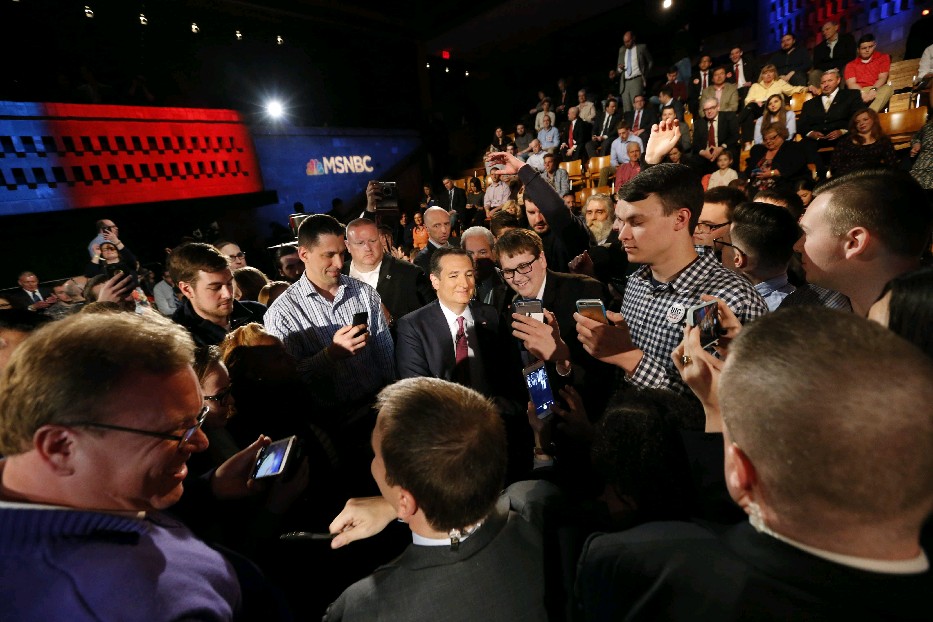 Sen. Ted Cruz meets with members of the audience during a commercial break in a town hall meeting sponsored by MSNBC at UB on Thursday. (Derek Gee/Buffalo News)

Another audience member asked Cruz about his plan for securing the country’s border with Mexico.

“We are going to build a wall, and triple border patrol,” he said, adding that when he is president: “You can’t get a job without proving you are legal.”

Another audience member asked the Texas senator about the “New York values” comment he made during the campaign in a way that some New Yorkers – particularly in New York City – took as disparaging.

The comment, Cruz said, was a reference to liberal politicians and comments that, he said, Trump previously made on partial-birth abortion.

“I agree that the values of upstate New York are tremendous,” Cruz said. “The state of New York has wonderful people. You guys have been suffering under misguided policies of misguided liberal Democrats for a long, long time.”

Most of the questions and conversation Thursday focused on Cruz’s national agenda, and national issues the Republican candidates have been hashing out during the primary season.

He talked about the importance of bringing manufacturing jobs back to New York, and criticized New York’s fracking ban.

“You have the Marcellus Shale,” he said. “You could have thousands of jobs if the politicians would allow you to develop what you have here.”

Audience members talking with Buffalo News reporters before and after the town hall session included Cruz supporters, Republicans still deciding which GOP candidate to support in Tuesday’s primary, and some Democrats, mostly students interested in the rare presidential primary that brings candidates from both parities to New York State.

Dzeneta Pajazetovic, 18, a UB freshman waiting to get into the Cruz event, described herself as a “Bernie girl,” but nonetheless came to hear what Cruz had to say.

“He supports the first and second amendments,” said Peters, who also is drawn to Cruz’s religious values.

Following the town hall, UB sophomore Alexa Ogra, president of the College Republicans, said she remains undecided about who to cast her ballot for in the Republican primary, but she views Cruz more favorably now that she’s had the chance to hear from him.

“It was great to hear how genuine he was,” she said.

She was particularly happy to hear Cruz speak on his pro-life stance, but said she wished she had heard more about his gun rights position, especially given the SAFE Act in New York State.

Williamsville resident Ann Sementilli attended with her two daughters, Lynn, 20, and Mae, 22, both engineering majors. They are all Cruz supporters.

“He answered all the questions thoroughly,” Ann Sementilli said.

Lynn Sementilli said the candidate was strong on his fundamental principles, showing his dedication to the Constitution and Bill of Rights.

“I agree,” Mae Sementilli said. “He was great.”

James Campbell, a UB political science professor who sat through the town hall meeting, said Cruz did what he needed to do to show he is a man of principle but flexible enough to assemble a winning coalition for the general election and work with others in Washington.

“He kind of dealt with some of his perceived weaknesses, the ability to reach out, unite the party, bring Americans together, be willing to compromise under the right circumstances,” he said. “He has this reputation as being a very difficult person to deal with, and he didn’t come across that way.”

Campbell also noted that the meeting skipped over issues of free trade agreements, which would have been important to people in Buffalo, who have seen the city suffer because of the loss of manufacturing jobs.