Despite a few quality chances early and a stout defensive effort from center backs Drew Braun and Michael Malcolm, FC Yemen were simply not strong or organized enough to meet Christos' level.

"[Christos] were an amazing team. We worked hard for two months to prepare...[shakes head], I think it was the weather," said captain Abdulqawi Mohamed, finishing his statement with a chuckle as light snow fell around him.

"So far they were best team I've seen -- in the BDSL, anywhere else," echoed FC Yemen manager Taha Omar. "We go to tournaments in Canada, Michigan -- I've never seen a team like this, so organized and strong."

Although the final score was lopsided and the beating comprehensive, FC Yemen's attackers nearly got off on the strong foot. Bassam Harhara swung in an early cross from the left side to find an unmarked Mohamed, but the midfielder rushed his shot and skied it over the net from eight yards away. 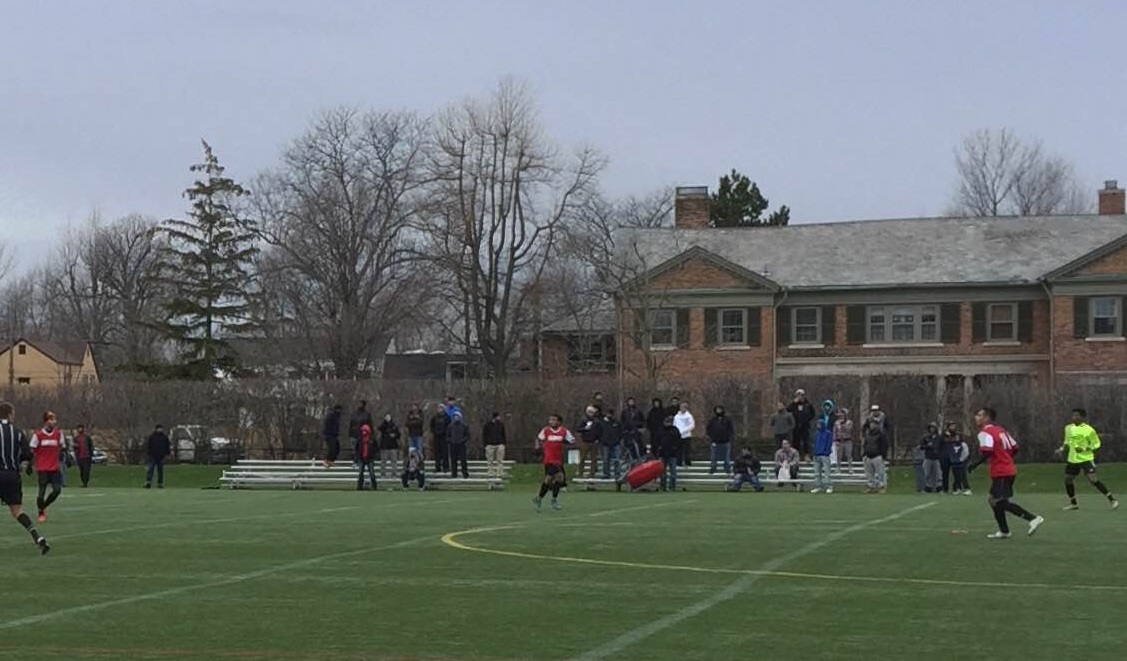 Possession favored the Maryland side roughly two-to-one, with Christos dominating the flanks with high pressure and strong challenges. Although FC Yemen intended to play with two strikers, mismatches in the middle forced Mohamed to suggest a formation change to Omar, and a 4-5-1 ensued.

"I was playing by myself in the middle and I needed help, and I spoke to coach to bring someone to support me, and it worked well -- when we had a couple chances in the beginning, that's where we created them, from the middle," Mohamed explained.

"They actually found our target," he continued. "When we played the wings, we lost it there...they're a good team."

FC Yemen's Abdulqawi Mohamed, who also plays for ECC, faced a tough task in the midfield. (via ECC)

After winning several set pieces in the midfield -- and generating scoring opportunities from them -- the visitors finally struck first inside 20 minutes. Christos forward Randy Rowe was the recipient of a headed flick in the box, and he calmly knocked a bouncing ball into the lower-left corner.

"Definitely the physical part of it [was Christos' biggest advantage] -- our guys are too small," Omar said. "The corners, the set plays, all the headers, the 50-50 balls, all theirs."

A minute before halftime, Christos doubled their lead with a back-post tap-in by Pete Caringi III off a low cross from Elton Joe, whom Yemen defenders insisted was offside after a deflection. The linesman kept his flag down, and the hosts entered halftime in a major hole.

Joe, Christos' most dynamic player on the afternoon, potted an insurance goal after the 70th minute, slicing through several FC Yemen defender and smashing his shot high into the net from close range.

Without Braun and Malcolm's smart tackling and ball-winning abilities -- and a few difficult saves from second-half goalkeeper Greg Slabyk -- Christos could have easily doubled their goal output.

"Our defense played real good -- they were sometimes disorganized, and the strength of the other team was too much for us," Omar said. "Drew and Mike had a heck of a game, given the team we were playing against. It could have been worse."

Although FC Yemen have been eliminated from the Werner Fricker Open Cup, they'll be well prepared for the BDSL premier slate that kicks off May 1.

"It was an honor playing in this cup," Mohamed said succinctly.

FC Yemen's Tehel Cup victory in 2015 earned them the chance to represent the BDSL in the Werner Fricker Open Cup. (Ben Tsujimoto/Buffalo News)