It is one of our area’s most famous traditions. You stay at a bar until 4 a.m. – which is another adventure, by the way, on our list of 100 Things every Western New Yorker should do at least once. Then, when the bars close, you head to Jim’s Steakout.

And you ask for a chicken finger sub.

Jim’s, a chain founded in 1981 on Elmwood Avenue, was founded on beef, and is still known for its Philly cheese steak. But it really excels in the game of chicken.

What is it that makes the chicken finger sub so popular? Is it that it is a riff on the Buffalo wing? Or is it that it proves the old adage, something about the sloppier the food, the better it tastes?

We all owe it to ourselves to find out, and so, stomach growling, I headed on a recent Tuesday to Jim’s Allentown location. Situated handily on the corner of Elmwood Avenue and Allen Street, it is open until 6 a.m. on weekends.

Even at noon, the place was a hotbed of activity. Sun splashed over the colorful walls. The ATM was flashing, “Welcome to Jim’s Steakout.” Gumball machines sparkled in the corner. 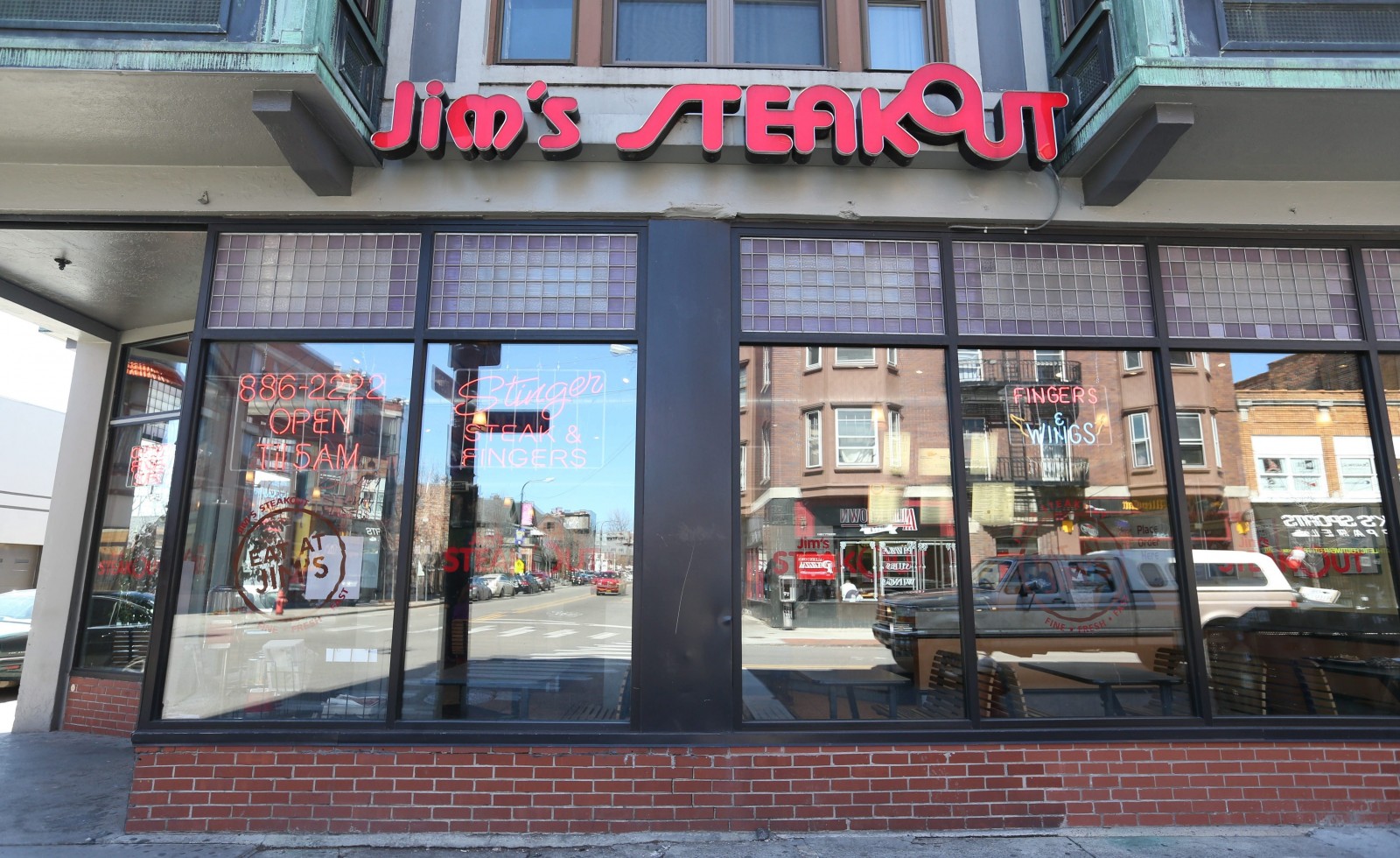 The recognizable signage of Jim's Steakout, which has several locations in the area. (Sharon Cantillon/Buffalo News)

Sara Alejandro, who works nearby, popped in for takeout. Yes, she had ordered a chicken finger sub.

More customers arrived, saying hi to each other.

“It’s like ‘Cheers’,” said Andrade. “Everyone knows everyone.” He pointed to Fran Angelo, one of two parking enforcement officials dining in the window. “Frannie’s my uncle.”

Angelo beamed that he had been eating at Jim’s Steakout for 33 years.

“I work different hours. On Friday nights sometimes I work 11 to 7,” he said. “This place is jammed on Fridays.”

That is a feather in the restaurant’s cap.

“College kids are like truck drivers,” he said. “They won’t eat where the food isn’t good. None of the meat’s processed. The turkey sub, too – it’s not processed. Everything is good here.”

The generously sauced chicken fingers are placed on top of lettuce, onions and the bottom bun. (Sharon Cantillon/Buffalo News)

The concept of the chicken finger sub can be tweaked to make it more or less healthy.

But another diner, Brian Wantuch, not only ordered the sub but ordered it with his own special twist. Instead of lettuce and tomato, he subs in bacon.

“I call it the heart attack,” he laughed.

Wantuch, a musician and recording engineer who owns Wasteland Studio, has enjoyed the chicken finger sub at all hours and knows to make adjustments accordingly.

“Sometimes late at night they make them drier,” he said. “It’s not as good. I request them a little saucier.”

Calling a hello to Angelo, Wantuch settled into a booth with his custom creation. Time to dig in. I did likewise. 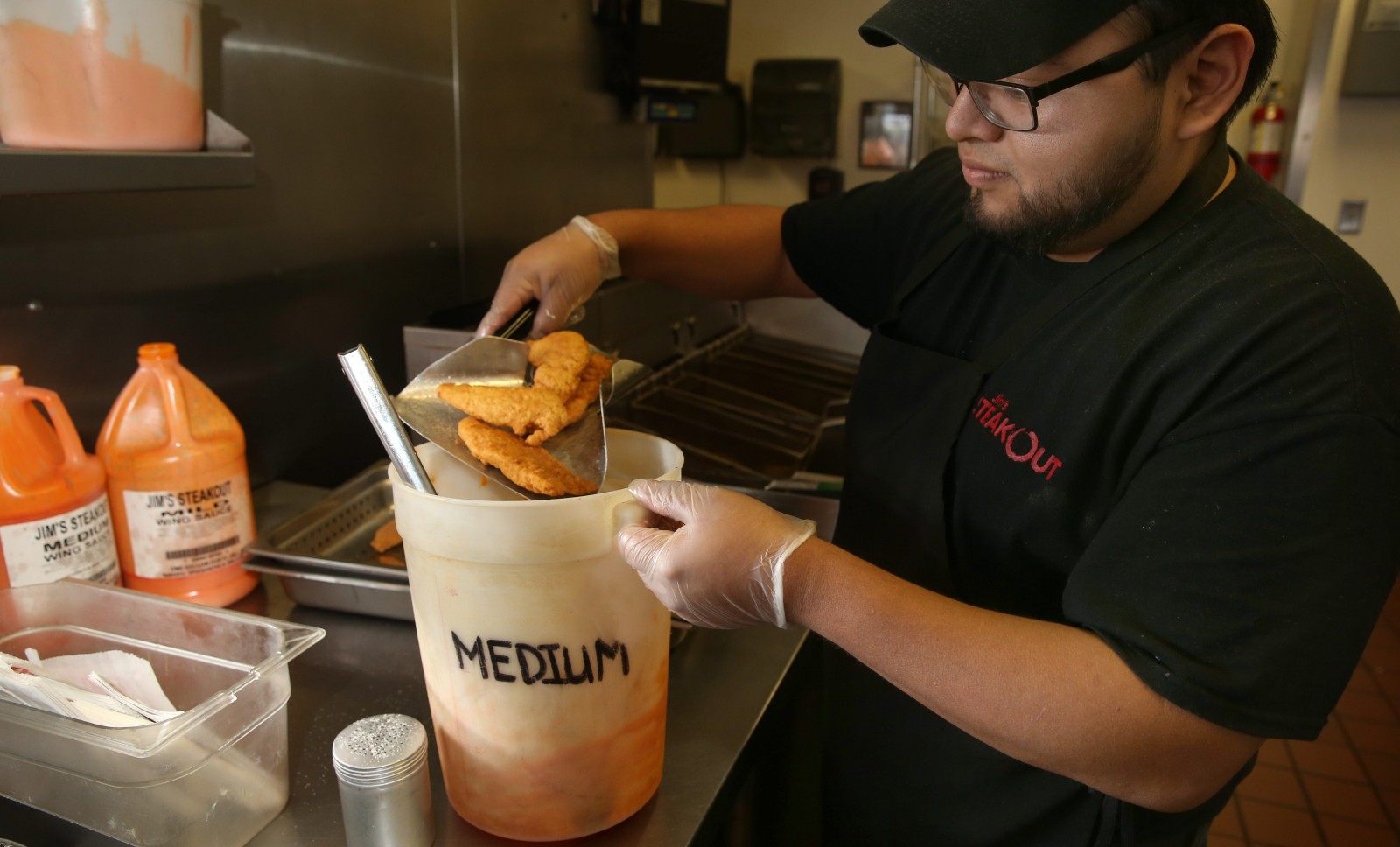 I was chicken to tackle the whole sub – which, according to my food-diary app Lose It!, weighed in at 900 calories. (Thanks a heap, to whatever Western New Yorker punched in that data.) Prudently, I went for a half.

Good thing, too. Once I tasted this thing, there was no stopping me.

With the first crunch, things start to slide, and we don’t just mean your diet. The chicken fingers, delicately breaded, ooze from between the rolls. A tomato slice slips out. A slice of American cheese, half melted, makes everything slick and slippery. The pile of paper napkins grows as you soak one after another. The bottom bun, deliciously sodden, falls apart. Soon the sandwich, like a noble Roman temple, is in ruins.

But what glorious ruins. Mopping and sopping, you grow oblivious not only to the calorie count but to the street outside, to your workday – even to CNN overhead, trumpeting grim headlines. The world can wait.

This is bliss. This is blue cheese. 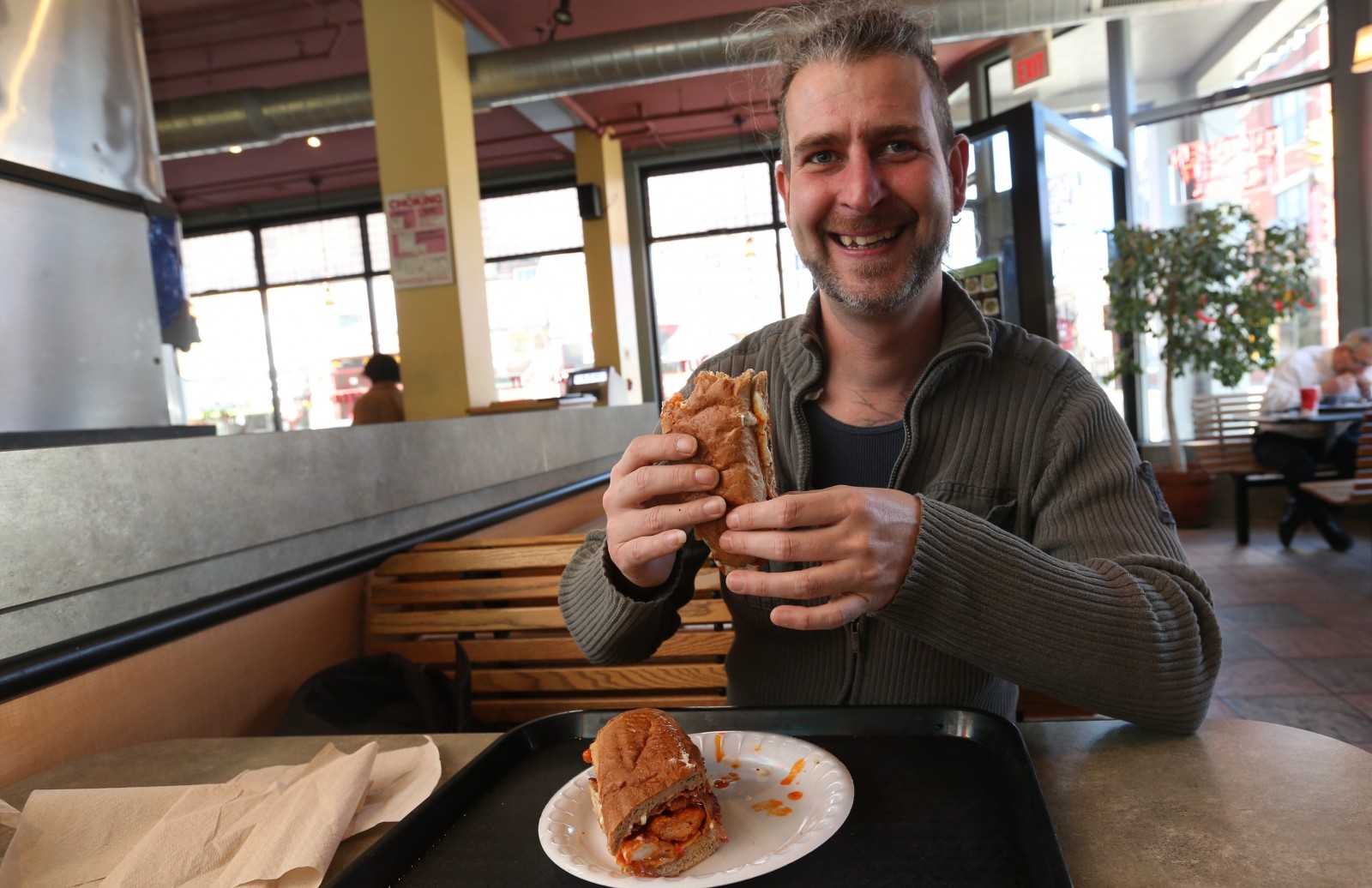 Brian Wantuch, of Buffalo, come’s to Jim’s weekly and orders the chicken finger sub about every other time. Today he gets his with bacon. He’s ready with plenty of napkins. He says the juicier it is, the better. (Sharon Cantillon/Buffalo News)