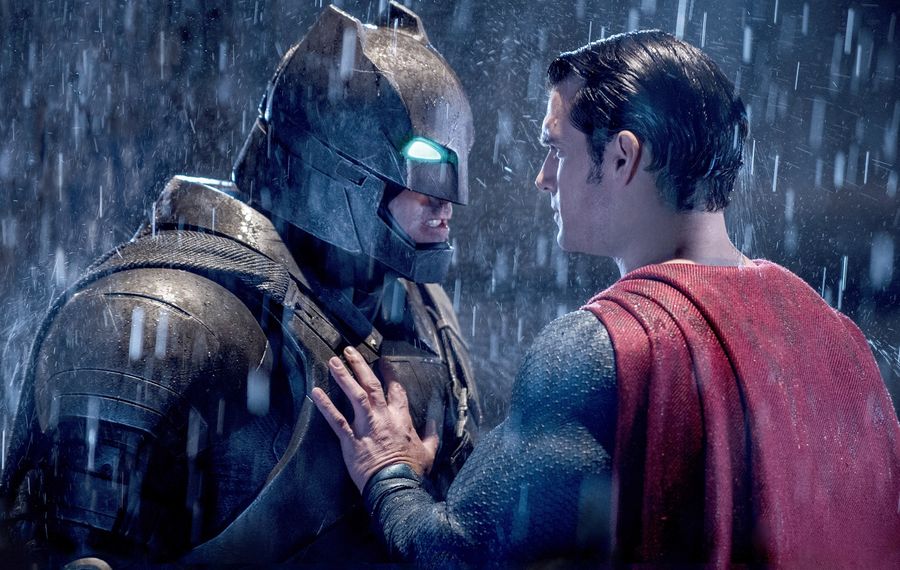 No spoilers. No ruining it for others. Warner Brothers was very clear in its relayed audience warning before the screening of “Batman V Superman: The Dawn of Justice.”

OK. No argument. They’re right. You shouldn’t know beforehand the big stuff that happens in “Batman V Superman: The Dawn of Justice.” But you need to know this, I think: none of that really big stuff was on the lips of any audience member I heard filing out of the theater after 153 minutes of IMAX boom and bash.

One fellow answered an industrial rep’s inquiry about what he thought by saying “it was fun” which is the one thing it absolutely isn’t. An awful lot of stuff happens that is no fun whatsoever in this humorless contribution to the mythology of DC Comics. And while you’re at it, think long and hard about dragging the little ones to this. Why ruin their day?

This thing is badly photographed and has bad music, too (until the last half hour when all those bass drums and timpani take over). On the other hand, Jesse Eisenberg is pretty good as Lex Luthor despite being no one’s idea of Lex Luthor. He’s just a supremely obnoxious version of a Silicon Valley billionaire out to prove how stupid the rest of us are. (When Lois Lane calls him a psychotic, he blandly observes that psychotic is “a three syllable word for any thought too big for little minds.”)

The movie is too long. Too much story contains too little humanity or drama. Too many things happen far too often for the really big things to register with an audience when they’re filing out of the theater – all of whom should be buzzing with things to talk about but are mostly glad to be leaving after two and a half hours of bullying by America’s Entertainment Industrial Complex.

So, you might ask, is there anything to like in “Batman V Superman: The Dawn of Justice?” Yes, very much so but that answer couldn’t possibly be more perverse.

Let’s get real here. This thing is going to make a box office fortune this weekend – and next too most likely. Thoughtful and serious moviegoers will even understand why there was no small corporate wit in the studio opening it Easter weekend.

But what pleasures there will be for most of the audience will be the reflex thoughtless pleasures of superhero ho-ha – big loud incoherent battles that don’t mean much to anyone outside fanboys and fangirls who are understandably happy that comic book mythology is being taken seriously.

Me? I liked everything that you really shouldn’t like in a superhero movie – especially not this one.

I liked much-derided Ben Affleck as Batman, unlike the ultra-hostile Internet. He plays Bruce Wayne as a gray-templed, beefy billionaire so fed up with lawlessness that he has turned into an unashamed torturer of miscreants. “How many good guys are left?” he asks. “How many stay that way?”

Not this guy. He’s a bitter, joyless, distrustful, seething one-percenter sick to death of evil and disorder. No question where this guy’s going to vote in 2016. That suits a middle-aged Affleck perfectly. If that’s your Batman – a radical idea to be sure – he’s ideal. This Batman gives you the exact point at which unchecked, self-righteous wealth rejects sybaritic pleasure and turns sleazy and brutal even when “goodness” and “justice” remain its aims.

The other thing I liked a lot is the script by Chris Terrio and David S. Goyer, which is leaded with a very dark cynical wit that probably no one needs or even wants in a superhero movie.

Batman’s butler Alfred (Jeremy Irons) observes of his boss: “That’s how it starts. The fear, the rage, the feeling of powerlessness that turns good men ... cruel.”

When Bruce Wayne and Clark Kent finally meet, their verbal fencing over their cities’ heroes sounds a little like Bills fans vs. Patriot fans.

Clark Kent: “Civil liberties are trampled in your city, people living in fear. He (Batman) thinks he’s above the law.”

Bruce: The Daily Planet criticizing those who think they’re above the law is a little hypocritical, wouldn’t you say? Consider every time your hero saves a cat out of a tree, you write a puff piece editorial about an alien that could burn the whole house down.”

Clark: “Much of the world doesn’t share your opinion, Mr. Wayne.”

Bruce “Maybe it’s that Gotham City and me ... We just have a bad history with freaks dressed like clowns.”

So this is the superhero movie to see if you want to see Superman forced to testify before Congress because he accidentally killed too many in people in Africa while saving Lois Lane’s life. (Clark and Lois seem to live together. He brings home the groceries, including flowers, and climbs into her bathtub with her fully clothed. Awwwwww...)

It’s the movie to see if you can’t wait to see a disillusioned Batman ready to do anything for the cause and physically brand his enemies. And to see cameos by Sen. Patrick Leahy, Soledad O’Brien, Charlie Rose, Anderson Cooper and Larry King. And Eisenberg as a twerpy, snotty, obnoxious Lex Luthor who has the best line in the movie about “the oldest lie in America – that power could be innocent.”

Is it any wonder people exit the theater after two and a half hours at that movie feeling something less than exhilarated and ready to jabber about it merrily on the car ride home?

Whenever the Justice League arrives in full, I hope they’ve remembered how to laugh.

Rating: PG-13 for intense violence and action throughout.