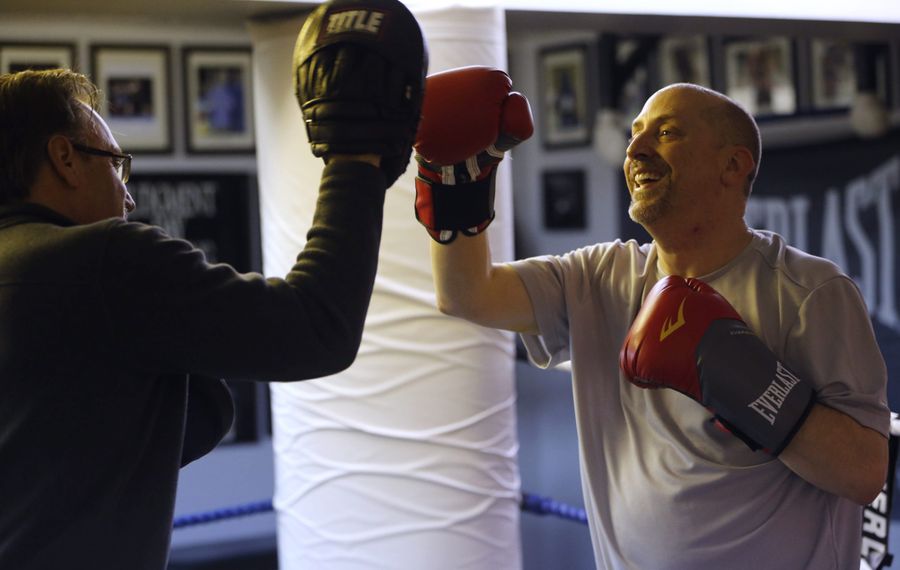 Tony Musilli burst through the boxing gym on a recent weekday, the door slamming open with a pop.

He tripped on the rug as he walked in, went forward with a sure step and a slight shake. His unsteadiness was nothing like four months ago when he made his way to a special basement boxing training room beneath the Fitness Factory gym on Delaware Avenue in Kenmore. At the time, he needed a cane and held the handrail for dear life just to get down the stairs. He had come to try a new approach to fighting off the symptoms of Parkinson’s disease – training like a boxer.

For Musilli and a growing number of people with the progressive nervous system disorder with no known cure, it seems to be working.

Boxing-style workouts to treat Parkinson’s began about a decade ago. Back then Scott Newman, a former county prosecutor from Indianapolis who was diagnosed at 40, noticed dramatic changes after working with a boxing trainer. To promote boxing training for more people with Parkinson’s, he started a nonprofit called Rock Steady.

Its approach to special boxing exercises for Parkinson’s symptoms is now in 104 gyms in 30 states, from Palm Springs, Calif., to Tampa, Fla.

“We think it’s really kind of reminding the muscles in the body how it’s supposed to work,” said Joyce Johnson, executive director, speaking by phone from Indianapolis. “Parkinson’s is not a wasting disease. The parts of the body still work. The brain is forgetting how to make it work.”

In Buffalo, there are now at least three Parkinson’s boxing programs – Eoannou’s gym, the Orchard Park YMCA and KC’s Fitness in Buffalo. They are not affiliated with Rock Steady and make their own adaptations of boxing training principles, like footwork and hitting the speed bag. Their fees range from $65 monthly memberships to modified hourly rates.

“You’re working from head to toe, constantly when you’re in that boxing mode,” said Christopher Jamele, executive director of the local branch of the National Parkinson Foundation. “I think the all-encompassing nature works so well. It’s the whole body being engaged.”

To be sure, they are not getting in the ring and hitting each other. Rather, they use the same training techniques boxers use.

“A lot of those things that boxers condition for happen to be issues for people with Parkinson’s,” said Kristy Follmar, Rock Steady’s Indianapolis program director.

It also helps that it’s fun.

Buffalo neurologist Thomas Guttuso knows of about six of his 350 to 400 patients who’ve told him in the last six months they’re boxing and it’s helping their symptoms. They say the disease progresses more slowly, balance improves, their medicine reacts more predictably and they sleep better.

“One patient in particular says he’s kicking the butt of Parkinson’s,” said Guttuso, an associate professor of neurology at the University at Buffalo. “I think that imagery is important. It keeps people engaged.”

He knows studies have shown that the martial art tai chi alleviates symptoms. While he doesn’t know of a boxing study, Guttuso believes it helps the boxers focus on balance.

Focus mitt hits are a foundation of the Parkinson’s boxing workout held Tuesday and Thursday afternoons in the window-paneled gym of the converted industrial space at KC’s Fitness on Gelston Street.

About six Parkinson boxers in training one recent afternoon included one woman. Two older men moved more tentatively with the slight telltale shake and stiffness. Everyone wore fat, cartoonish boxing gloves and stood poised in a semicircle around the trainer.

She called out the sequence, using the words for different left and right punches.

Leather gloves hit the mitts as she turned, one by one, to face each boxer.

A few, like David Golembeski, didn’t look like they have the disease. The session ended too soon for him. He wanted more. A former international field engineer at Moog motion control in East Aurora, stiffness in his right arm forced him to leave his job after he was diagnosed at 55.

Now he is 60 and at the end of the hourlong class, Golembeski felt good, but not dramatically different. It was a subtle improvement, similar to the regular weightlifting and cycling exercise he does at the gym near his home in Amherst a few times a week.

“You start to get in a groove, a little routine high,” he said. “You kind of forget you have Parkinson’s.”

Musilli vividly remembers the November afternoon when he propped himself up on his cane and first met Eoannou at the reception desk at Fitness Factory.

That day he could barely make it down the steps to Eoannou’s basement gym and boxing ring.

Eoannou, boxing coach for the University at Buffalo, started working with Musilli days after a story appeared on “CBS Sunday Morning” in November about the success of the Rock Steady program. Eoannou’s wife made him watch the show. Then, his dentist, Musilli’s former wife, asked him to help Musilli, 49, who was struggling with Parkinson’s.

On that first day in the basement gym, Musilli tried to place his feet along the angled yellow markings on the floor.

Eoannou held up Musilli so he could stay balanced and standing.

They both wondered if a boxing workout was too much. Eoannou, who graduated from Cornell University with a bachelor’s degree in education, decided to take a methodical approach. He kept a record of every workout. On a page dated Nov. 16, he wrote, “Struggled. Said he felt like he was falling. Had to be supported … ” after an exercise that Musilli couldn’t do at all – stepping up and down from a box.

Musilli came every day. He now works an hour and a half with Eoannou and another hour or so on his own on the elliptical, treadmill and exercise bike.

When he leaves his house, Musilli leaves his cane behind, leaning on the kitchen table.

Eoannou has been working with a half-dozen more people, including an 82-year-old woman and men with varying degrees of impairment. They report new ease with fundamental things like buttoning shirts. He’s decided to change his focus and stop coaching UB students at the end of the year. His new passion is the business he is calling “Parkinson’s Boxing.”

“I’m 62. I’m rounding third,” said Eoannou, who is the older brother of defense lawyer Thomas. “This is how I want to finish up.”

On a cool afternoon a couple of weeks ago, Eoannou brought back the box that stymied Musilli in the fall. This time, by himself, Musilli managed to step down to the side – right, then left. Over and over.

After 35 times he lost his balance. A few days later, he pushed himself to 460. But Eoannou, who left for an errand, missed it. By the end of last week, Musilli was determined to go higher.

As Eoannou watched, Musilli’s step count climbed into the hundreds. Sweat covered the box in a wet sheen. Eoannou was afraid to clean it off, lest he break the rhythm.

Finally, gasping for breath at 1,011 steps, Musilli stopped. Eoannou gave him a one-man standing ovation. Musilli leaned against the ring’s ropes, took it all in and set a new goal.

He wants to learn to run outside on the grass again.