As we make the final slog to spring, we’d like to celebrate the end of comfort food season with a final note to honor what we think is “the ultimate comfort food”— macaroni and cheese. But not the boxed variety (although we are partial to Trader Joe’s version in a pinch).

We’re talking made-from-scratch macs that have popped up on menus all over the area in recent years.

From a high-end restaurant to a hot dog joint, here are five - one for to try each week in March - of the many versions of mac ‘n cheese you’ll find at local restaurants.

Fans of Chef Edward Forster of Buffalo Proper know he doesn’t do food in half measures. Prepared to order, his mac and cheese features cheddar, Leonard Oakes apples and bacon.

Forester says they use red delicious apples in the dish.

“As we cook the red apples, their flavor concentrates and becomes sweet, blending well with the cheddar and bacon. We use Nueske’s bacon because it’s heavily flavored and smoked.”

“Ours is pretty classic flavor combos. Cheddar, apple and bacon to me is a natural flavor combo,” said Forster.

The menu notes the dish is made to order so you know it’s not sitting in a pan somewhere.

“We denote on the menu a few things are ‘prepared to order’ to alert our guests that the items take longer. Mac and cheese as a starter will often times take about 20 minutes to prepare,” he said.

Buffalo Proper utilizes a method from the “Ideas In Food” (a website, cookbook, food blog by Aki Kamozawa and H. Alexander Talbot a blog), which recommends soaking pasta for an hour in room temperature water.

“They used a dairy base of evaporated milk and fold cheese into it to make a fondue. I utilized their base idea and altered ratios for what we are doing.”

Buffalo Proper has also done a duck confit version and one with chorizo, manchego and pear.

“The flavors are very easy to substitute and change utilizing the base idea. Learn a good technique, understand how and why it works, and the flavor combos are endless. Understanding how food and cooking works allows you to have fun and use base techniques to change and evolve with your taste.”

But we all know it’s the taste that matters, and in the case of mac and cheese, homey.

“Macaroni and cheese is a very American-style comfort food. I grew up eating a similarly baked style of mac ‘n cheese that is still one of my mother’s signature dishes that everyone in my family craves.”

Yet don’t look for the dish on Buffalo Proper’s menu for too much longer.

“We do not serve mac and cheese in the summer. To me sitting outside on a patio sweating and eating a heavy rich dish of pasta and cheese doesn't sound sexy. Timing is everything. Mac ‘n cheese is a comfort food for now because it’s affordable, great in winter and reminds one of mom.

“Our dish is a hearth-baked style, which makes it even more homey. The idea of an open fire, earthen pot, and the crusty rim of a baked dish are quintessential comfort food,” Forster said.

Fat Bob's Texas Mac, topped with chopped brisket, smoked bacon and jalapenos, is one of four kinds the restaurant serves. (Emeri Krawczyk/Special to The News)

Oh, what is it about barbecue that begs for macaroni and cheese?

Once just a side dish, going back to when the restaurant first opened, owner Patrick Ryan helped mac and cheese evolve on Fat Bob’s menu.

He made the move to add full entrees about four or five years ago. Like most items on a menu, customers drove the change.

“We had three side combos on the menu and we found that people were ordering multiple sides of mac and cheese, so we decided ‘let’s make this an entrée,’ ” said Ryan, who noted his favorite way to eat the mac and cheese was to put pulled pork on top.

At the Taste of Buffalo they started offering pulled pork topped mac and cheese and it was a hit. Eventually the dish earned its own place on the menu.

One of his employees said they should offer brisket version.

The outside of Fat Bob's along Virginia Street in Allentown. (Harry Scull Jr./Buffalo News file photo)

“I thought he was crazy,” said Ryan, but that combination also worked . Today the menu offers four styles of macaroni and  cheese entrees: regular, Memphis (with pulled pork and slaw), Texas Mac (with brisket, smoked bacon and jalapenos) and Buffalo Chicken topped mac and cheese with celery and blue cheese.

As expected, mac and cheese is a popular menu item. “It’s a close second to our best selling rib dinner,” he said.

“The nature of mac and cheese is comfort. The Memphis is one of my favorite items on the menu with the sweetness of the barbecue sauce and the texture of the coleslaw. When you think of barbecue, it’s a great paring for something like mac ‘n cheese that is homey. It really hits the heart.”

While just about all barbecue joints serve mac and cheese, we like the Chili Mac at R&R BBQ. Yes, mac and cheese topped with chili. Why didn’t we think of that? R&R has a food truck and also a brick and mortar in Elma.

Mac & Curly's is baked in a cast-iron skillet. (Emeri Krawczyk/Special to The News)

Chris DelPrince of Curly’s said the decision to add macaroni and cheese entrees was based on a trend they were seeing.

“We went to New York City to do some research. We immediately saw a growing trend with macaroni and cheese entrées, with many different varieties from simple to gourmet. We also visited restaurants that were serving strictly macaroni and cheese, a trend we saw in other major cities.”

One of the components the chef and culinary team used to create Curly’s version was a combination of freshly grated artisanal cheese.

“We went through a rigid tasting process, and paid attention to detail until we got the right taste and textures,” said DelPrince. The pasta used is a very large elbow macaroni that is curly, adding to the play on the name “mac and curly.”

Curly's in Lackawanna has an outside-the-ordinary take on macaroni and cheese. (Sharon Cantillon/Buffalo News)

Curly’s wanted a mac and cheese that was traditional for Western New York, so the beef on weck version was born.

Mac ‘n Curly’s are baked and served in a cast iron skillet.

“We find that the cast iron skillet cooks much better and more evenly. It also provides a crusty bottom, which is full of flavor,” DelPrince said.

In addition to the menu macs, Curly’s offers specials.

“Mac and cheese is fun because the varieties are endless,” he said. “The Mac & Curly’s are new to our menu, but have been in our top 10 selling dishes,” he noted.

Other mac and cheeses that are a little odd: 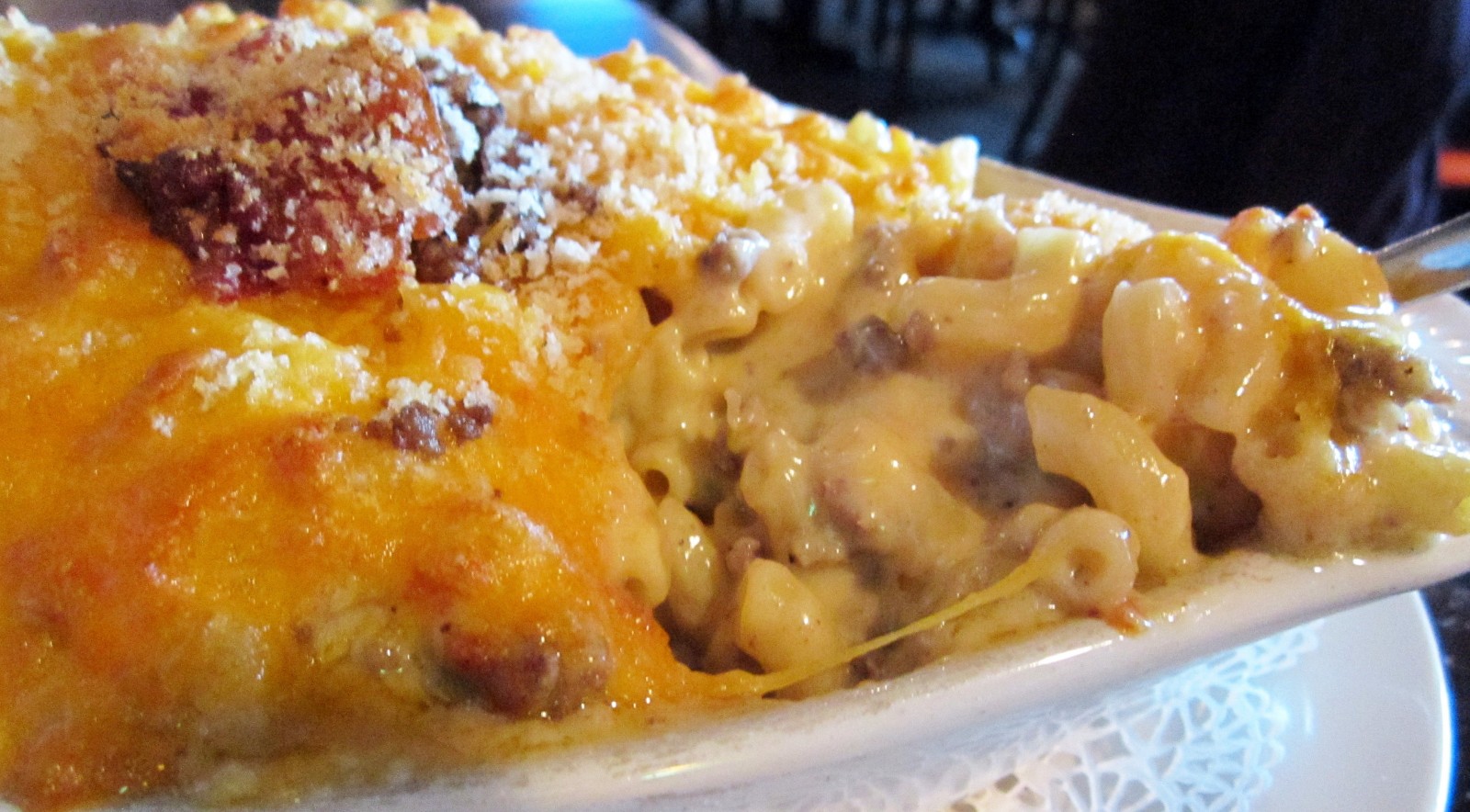 Somehow mac and cheese with merlot doesn’t seem quite right. A beer is more like it and all six Mooney's locations (a seventh is coming to West Seneca in the former Tony Rome's) serve up plenty of beers along with the house specialty — mac and cheese.

Mooney’s has raised the bar with 17 macs to choose from. From original and Buffalo chicken to pizza and Rodeo mac and cheeses, each dish is made to order.

Thankfully, Mooney’s offers half and full portions, so one can either refrain from acting like a total glutton. The best part about Mooney’s mac and cheese - besides the taste - is that it reheats well.

Other places to have a great beer with your mac and cheese:

Yes, you can have it all. A hot dog topped with mac and cheese, bacon and onion rings. (Emeri Krawczyk/Special to The News)

Just when you thought a charbroiled hot dog couldn’t get any better, why not top one with mac and cheese?

“We started offering mac and cheese on any of our sandwiches around August 2014,” said Thecly L. Ortolani, president and granddaughter of Ted Liaros who started Ted’s during the late 1920s on Buffalo’s West Side. “When our new CEO came in in June of 2014, he was looking to create some ‘food news.’ We already offered mac ‘n cheese and onion rings, so why not offer both as toppings on our sandwiches?”

Ortolani notes the extra toppings are growing in popularity with customers.

“A little later in November, after sourcing an excellent bacon option that would hold up to charcoal broiling, we introduced our bacon topper,” said Ortolani. “The bacon has proved to be our most requested topper with rings and mac and cheese right behind.”

“Awesome Dogs” now include a Bacon and Mac Dog or a Mac and Ring Dog (you can get a Bacon, Mac & Ring Dog too) — regular or footlong.

“Our mac and cheese is a mild cheddar cheese-based mac and cheese, said Ortolani. “You can add it to any sandwich we sell. With all those toppings, it can be a little messier task to get it all in. We are always happy to provide a fork and knife,” laughed Ortolani.