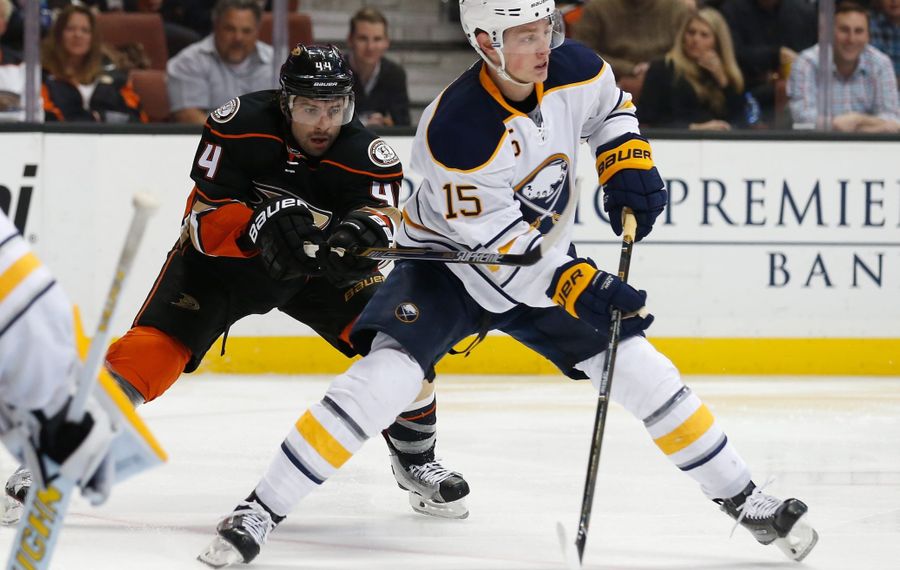 LOS ANGELES – Not a lot wrong with the defense and goaltending. Plenty going haywire with the offense, especially on the power play.

The Sabres had a chance to win all three games. They won only one, Friday in San Jose. They were shut out twice, including Saturday’s 2-0 loss in Los Angeles that ended at nearly 2 a.m. Sunday Buffalo time.

“We played well but not good enough,” center Jack Eichel said after Saturday’s game in Staples Center. “We weren’t opportunistic at the times we needed to be. You come away from three games only scoring two goals and an empty netter. Not enough. Puck possession needs to get better. We threw too many pucks away.”

“We had opportunities to tie the game and we didn’t,” added winger Evander Kane, referring to a third-period flurry when the Kings’ lead was still only 1-0. “We didn’t give up very much but we didn’t generate enough to score. We played tight checking teams on this trip who don’t give you a whole lot.”

Tanner Pearson scored both goals for the Kings and former Sabre Jhonas Enroth made 24 saves for his second shutout of the season. Buffalo has lost its last three meetings in LA by 2-0 scores and hasn’t dented a Staples net in more than 198 minutes dating to 2010.

A big reason the Sabres failed to win on Saturday was their struggling power play. Another 0 for 3 drops the ledger to 3 for 28 over the last eight games. Puck possession is minimal at best at times.

“We had some quality chances but we had those one-and-dones with the puck and that doesn’t help at all,” Kane said. “We didn’t recover the puck well. It doesn’t give you the momentum to try to press and score.”

“It’s definitely a deflator,” noted winger Jamie McGinn. “We need to have our power play change the momentum of the game in our favor. I felt it changed momentum into their favor far too much.”

Eichel has been particularly frustrated by the power-play issues in recent games.

“It seems like we can’t maintain too much pressure in their zone,” he said. “We have to extend our shifts down there as a unit, start to execute a lot better. It comes down to how hard you want it.”

The trip was a tough one on the whole for Eichel, who was on the ice for both Kings goals Saturday. That dropped his rating to minus-15 – the worst in the NHL among the league’s 168 rookies.

Eichel has no goals in the last six games and just one over his last 13 games. But he did have six shots on goal Saturday and was more active than in recent outings.

Coach Dan Bylsma admitted he senses the frustration building within the 19-year-old.

“No question I think it’s high and it’s high because he wants to be able to put the puck in the net for our team and help us win,” Bylsma said. “That’s where the frustration level is for Jack. He’s played three games in California against three big teams and some tough centermen to play and he’s felt that.

“For myself, no production in these three games,” Eichel said bluntly. “I need to be a lot better and I need to step up. Coach puts me in great situations, playing with great players, on the power play. I’m getting the opportunities. I need to start finish. It starts with me.”

The Sabres wasted some strong goaltending on the trip as Robin Lehner and Chad Johnson combined for a 1.33 goals-against average and .955 save percentage, stopping 85 of 89 shots.

No one knows what the roster will look like when the team hits the ice for the morning skate prior to Tuesday’s visit by Connor McDavid-led Edmonton. Johnson and McGinn are among the unrestricted free agents on the market who could be moved.

McGinn, who is fifth on the team with 14 goals, seemed resigned to his fate late Saturday night. Until now, he’s been able to focus on the next game and not be consumed by the possibility of news coming to his phone about a deal.

But until the trade deadline hits Monday, however, McGinn can only sit and wait. Unless something drastically changes Monday, a contract extension does not appear to be in offing.

“I’ll be waiting for it to ring probably, I don’t know,” McGinn said. “It’s unfortunate but that’s the business of hockey. I really don’t know what’s going to happen. It’s a little mentally draining but that’s the name of the game.”