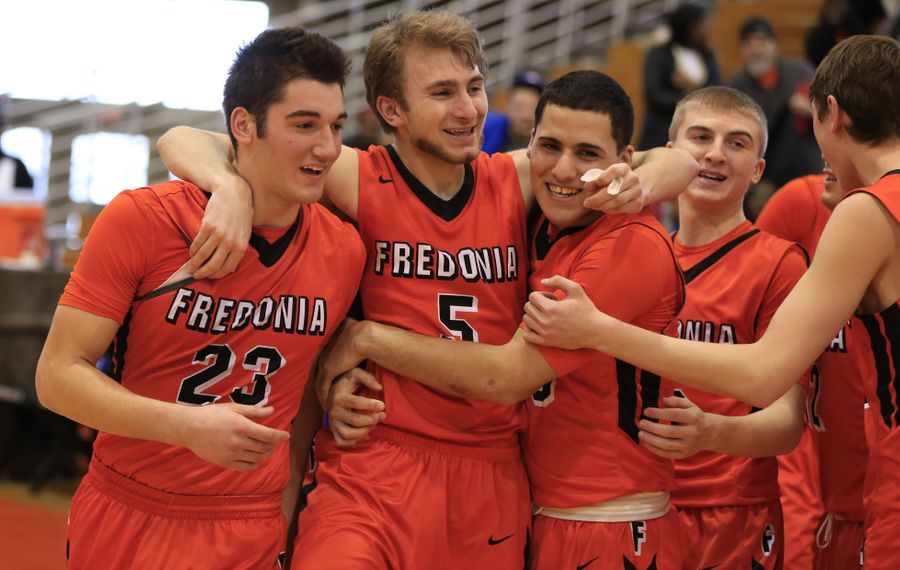 Fredonia had perhaps the hardest road to travel, carrying the most psychological baggage, just to reach the Buffalo State portion of the Section VI boys basketball tournament.

So it makes perfect sense that the Hillbillies found satisfaction in not only finding their way back to the Sports Arena for the fourth year in a row, but also in shedding the huge monkey they’ve been carrying around for roughly two decades.

Fredonia’s season continues as the Hillbillies earned the right to be called champions for the first time since 1994 by defeating Health Sciences, 52-48, in the Class B-2 final Saturday afternoon at the Sports Arena.

Senior Patrick Moore more than made amends for a poor showing in last year’s title-game loss to East by scoring a game-high 31 points – 30 more than in the 2015 final – to lead the sixth-seeded Hillbillies into the overall Class B final.

“Toughest road we’ve had the last four years,” said Fredonia coach Greg Lauer, whose Fredonia team went 4-0 in the B-2 bracket. “These guys are just a special group. The way they get ready to play. The way they prepare. It means a lot that they were finally able to get one for us.”

A familiar face will be waiting for Fredonia at 6:45 p.m. Tuesday night at the Sports Arena.

Unbeaten Olean will get to face the Hillbillies for a third time this season after dispatching No. 3 East Aurora, 67-46, to win the Class B-1 title and earn a place in Section VI basketball history.

“We’ve had some guys who have bought into the fact it takes a whole team to be successful,” Huskies coach Jeff Anastasia said. “That’s why we’re here right now.

An estimated 2,400 showed up for the first two games of Saturday’s championship quintupleheader that ended with defending Class AA champion Jamestown facing Niagara Falls in a game that did not finish in time for this edition.

Fredonia (19-5) may have taken the route through pre-quarterfinals to reach Championship Saturday, but it has reached the final enough to be considered a Buff State regular. That poise came to the forefront against a fifth-year Health Sciences (18-4) team making its first final appearance.

Moore opened the scoring and had eight in the first quarter as the Hillbillies seized control. He finished with 18 in the half as they led, 32-19.

The Falcons pulled within 46-43 on TayVion Nelson’s layup with under two minutes left. But Moore responded with a traditional three-point play with 1:27 left to seal the win.

“It’s definitely been in the back of my mind that I had one point in a sectional final game when I was averaging 15 or 16 points per game,” he said. “It’s definitely motivated me.”

“He brought it tonight,” Lauer said. “He played like a true leader.”

Tyron Lott had 11 points to lead the Falcons.

Olean threatened to run away with the B-1 final, canning six three-pointers during the opening half as Jake Cavana drained four of them en route to a 16-point effort. The Huskies led by 17 at one point the second quarter

East Aurora refused to go down that easily as the Nick Montgomery canned a pair of treys and had 10 of his 15 points during the Blue Devils 16-8 run to close the quarter and pull within 35-26 at halftime.

The Blue Devils pulled within five in the third quarter but there’s a reason Olean has won five straight championships. It knows how to seize control of games.

The Huskies did just that when it turned a 38-33 lead into a 47-36 edge. Ben Eckstrom scored 14 of his game-high 21 points in the second half. He and Elijah Ramadhan combined for all nine of the points during the run.

“We had a bunch of different guys contribute,” Anastasia said. “I’m just really proud of the effort.”