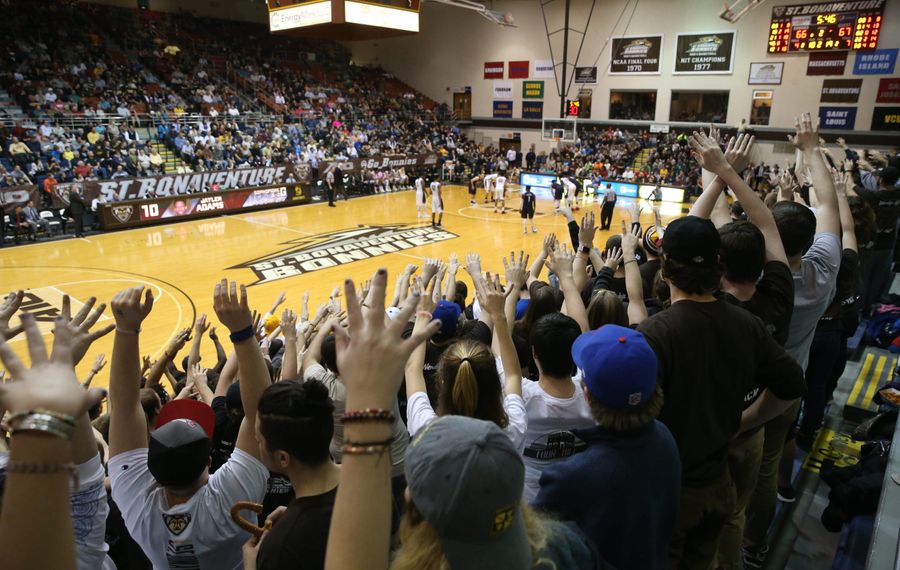 St. Bonaventure got his name from St. Francis of Assisi. Apparently St. Francis, seeing him, foresaw his greatness and piety. He exclaimed: “O buono ventura,” Italian for “good fortune.”

Oblivious to sports, I had no idea Bona was in the midst of an extraordinary season. Or what the game would be like. The only thing I knew was that the Reilly Center was wild. It’s small, I read, and such an intense reflection of Bona’s formidable community spirit that opposing teams are miserable. Bona likes to quote ESPN: “When we say the Reilly Center is rabid, we’re not doing it justice.”

Even before the game began, I began to see what ESPN meant.

I met the Bona Wolf, who took my notebook in his jaws. And a half-dozen sophomore guys sophomorically decked out in old bathrobes and floppy hats. “We’re here for every home game,” one laughed. “It’s about being as crazy as we can be.”

The students were so welcoming that I sat in the raucous student section, instead of going for the higher, more sedate seats. There was a calm during the national anthem. Fans stood with their hands on their hearts. The Dukes, dignified, lined up with their arms around each other.

When the anthem ended, so did the niceness. A freshman named Ken Ngoopos pulled me around.

He explained: “When they introduce the other team, we turn our backs.”

That iciness continued as the game got under way. Any basket the Dukes scored was met with disdainful silence. Cheers for Bona were loud and constant. On this particular night, chants of “SIS-ter MAR-garet” (clap, clap, clap-clap-clap) centered on Sister Margaret Carney, Bona’s president, who had just announced her retirement and, poignantly, a cancer diagnosis. After intermission, in a rare move, Sister Margaret left her usual seat to join the students. Love abounded.

But not on the court.

The second half began under a cloud. Bona was behind. Then things looked up. We were tied! Alas, immediately, one of the Dukes leapt up and dunked the ball, venomously gripping the rim. No. Nooo! Wait. Was that me yelling?

We caught up again. They upped us again. The bathrobe boys booed as the Dukes got a free throw. Students argued with the refs, who mouthed things back. When Bona gets a chance to score, you raise your hands in the air, fingers waving, in a plea for divine intervention. It works!

Things heated up even more as the end neared. Michael Manross, a security guard at Bona games since 1998, confessed he had seen things boil over.

Once, he confided, a kid tried to grab the famous hawk mascot of St. Joseph’s University. “I had to step in before he got to the hawk,” he said. That was long ago. But anytime, anything was possible.

“If Bona wins, stand clear,” he cautioned. “You don’t know what will happen.”

We have to win, I prayed. This is one of the 100 things every Western New Yorker must do! It can’t end in defeat.

The last moments were bedlam. One can only guess what St. Bonaventure, an austere Doctor of the Church, would have thought of the passion and fury.

Manross ducked out. Part of his job, he said, is to make sure the guest team gets out safely.

And then, suddenly – victory! We had won, 80-76. Students poured screaming onto the court.

“It’s my last home game as a senior,” he said. He was bound for Brooklyn. But he was going to keep track of the Bonnies. “We’re going to follow them wherever they go.”

As will I. For the first time, I’ll be reading The News’ sports pages.