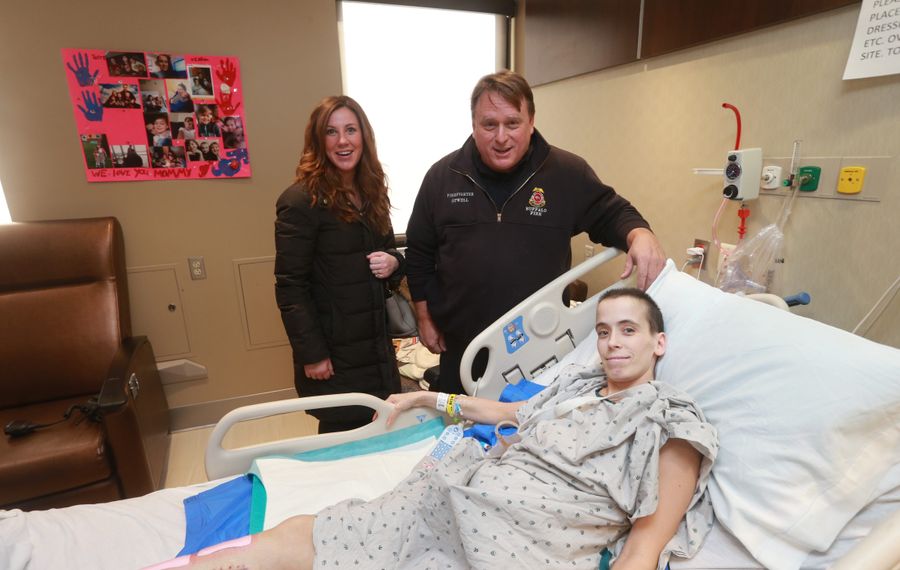 Firefighters in South Buffalo found Jessica Powers lying on the road in early January, minutes after she was run over by a tractor-trailer.

Lt. James Otwell of Engine 25 knew the injuries to the woman’s pelvis and internal organs would be extensive, and as he bent over the motionless figure he whispered: “Stay with us. Hang in there. You’re going to do this.”

But her injuries were so severe, Otwell was not sure she would survive.

“Unfortunately, a lot of times when we go on calls we don’t get any follow-up,” Otwell said. “We don’t know how people are doing and we can’t just call the hospital and get the information. We’d been thinking about her.”

And Powers, who endured 12 surgeries during her first five days in the trauma center, wanted to thank the firefighters who saved her life.

“I fell asleep and all I could hear was the firefighter saying, ‘You’re going to do this.’ I remember him saying he was going to put me on his fire truck and drive me to the hospital if they didn’t get an ambulance right now.”

Powers was waiting for a bus to take her to work on the morning of Jan. 8, when her life took an unexpected turn. The 29-year-old mother of three was employed as a line cook for Applebee’s near the McKinley Mall in the Town of Hamburg.

Police said the accident occurred on South Park near Bailey avenues at about 11 a.m., when the truck turned onto South Park from Bailey. Witnesses said the truck hit Powers in her side, knocked her down and dragged her a short distance before it ran over her midsection.

The team applied a neck brace. They placed Powers on a back board. When cutting off her down jacket, Otwell remembered seeing feathers scattered by the wind.

When Powers, 115 pounds and 5-foot-2, arrived at the hospital, which is a first-level adult trauma center, her pelvis was crushed. She had no movement in her legs. She required surgery on her bladder, spleen, colon, stomach and legs.

On Friday, as she propped herself up in her hospital bed to greet a room full of visitors, it became clear Powers had already won many battles. Her blue-green eyes scanned the room as she locked her hands behind her head and took in the scene.

The appearance of the firefighters was arranged by her sister, Dawn Darling, who scoured the firehouses in the area searching for the crew who saved Powers. Darling, 43, said it took a week before she was able to locate and talk with Otwell, thanks to the fluctuation of a firefighter’s work schedule.

“I went to all the firehouses trying to find them,” Darling said. “I finally got to Southside, but it was a fishing game.”

Assembling the entire crew of firefighters who responded to the accident was impossible. Gatti and Jankowski were not able to make the bedside reunion.

Manna, who brought the orchid to the hospital, recalled returning to Station 6 on Southside Parkway after the accident.

“It was a tough day,” Manna said. “When we went back to the firehouse we were getting ready for lunch and I couldn’t get her out of my mind. Is she going to make it? What will she be like when she comes out of it? It’s been on my mind since that day.”

One doctor compared the impact the tractor-trailer had on Power’s frame to an old-fashioned Corelle plate being dropped from the roof of ECMC, Darling said.

“He said we’d be picking up the shreds for years to come,” said Darling, adding that much of her sister’s nerves and muscles were crushed.

Otwell stood by the head of Powers’ bed watching silently. A smile crossed his face.

“We had two cardiac patients who required extensive resuscitation efforts,” he said, “and we wanted to follow up and see how they did, but we never did. It was nice to see that this effort worked.”

Friends of Powers have organized a benefit at 8 p.m. April 9 at the Avenue Pub, 2113 South Park Ave. Tickets, that include food, beer and well drinks, are $20 each and can be purchased at the door.