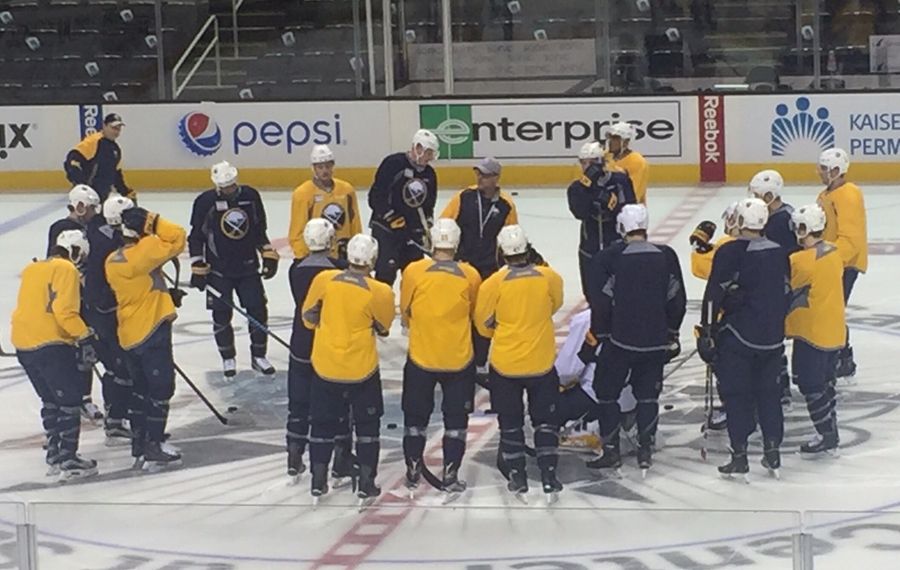 SAN JOSE, Calif -- The Sabres game tonight against the San Jose Sharks comes under the heading of Sometimes There is Just No Explanation.

Buffalo, a team that hasn't been in the playoffs since 2011  and has been at the bottom of the NHL for most of the last three seasons, has dominated this series against a perennial playoff contender. The Sabres had won eight straight over San Jose until the Sharks' 2-1 overtime win Nov. 14 in First Niagara Center, and that was the visitors' first victory in Buffalo since 2005.

Then there's the record at SAP Center, known to all in the hockey world simply as the Shark Tank. The Sabres have won their previous four games here, with the last loss coming in 2010. It's a menacing, intimidating place to play -- until you look at the Sharks' record this season. San Jose is 21-9-3 on the road -- but just 11-12-3 at home. This is its first game back in town after a 3-1-1 road trip.

Still, the Sharks are feeling much better in their own building than earlier in the season. They've had points in nine straight home games (6-0-3) after opening the season just 5-12 here.

"This is one of the loudest buildings in the West for sure," Sabres coach Dan Bylsma said today. "I don't know if it's the structure of the building but the sound reverberates pretty loud in here. It's always a tough place to play and they've always had big, strong, physical grinding teams. That grinding style comes with the skill of Joe Thornton and Patrick Marleau, Joe Pavelski as well. It makes them tough to play against."

The Sabres need to get their struggling power play cranked up against a San Jose team that's just 23rd in the NHL in penalty killing and 27th at home. Buffalo went 0 for 4 in Wednesday's 1-0 loss at Anaheim and is just 3 for 25 in its last seven games.

"The power play has definitely struggled and I take a lot of the onus on that," center Jack Eichel said today. "I have to be a lot better on the power play. I have to work harder. It's execution and getting things done and we haven't done it. The power play is something that's supposed to help you win games and not lose it. We have to improve there for sure."

Eichel faced heavy matchups Wednesday against Ducks center Ryan Kesler, easily the most shadowing he's faced in the wake of Ryan O'Reilly's injury. He figures to see a lot of Thornton and Marleau tonight.

"It is a bit of an education," Bylsma said. "In Anaheim we saw probably for the first time a straight up matchup against one of the better checking centers in the league and we saw that pretty repeatedly in that game. He's going to be faced with it again tonight I'm sure."

"It's probably the first time this season I've been checked like that and keyed on," Eichel said. "It's tough but if I want to be the player I want to be, it's something I have to learn to deal with and get through."

Chad Johnson will be in goal tonight for the Sabres, snapping Robin Lehner's five-game run in the net. Johnson stopped 30 of 32 shots in the first meeting and the rumors abound he could simply be changing sweaters this weekend. As I wrote in today's paper, Johnson is an unrestricted free agent and the Sharks are one of the most prominent teams looking to upgrade at backup goaltender.

Starter Martin Jones will be in goal for the Sharks. He's 29-16-4 with a 2.36 goals-against average and .916 save percentage. He stopped 31 of 32 shots in the first meeting, giving up only an O'Reilly goal in the third period.