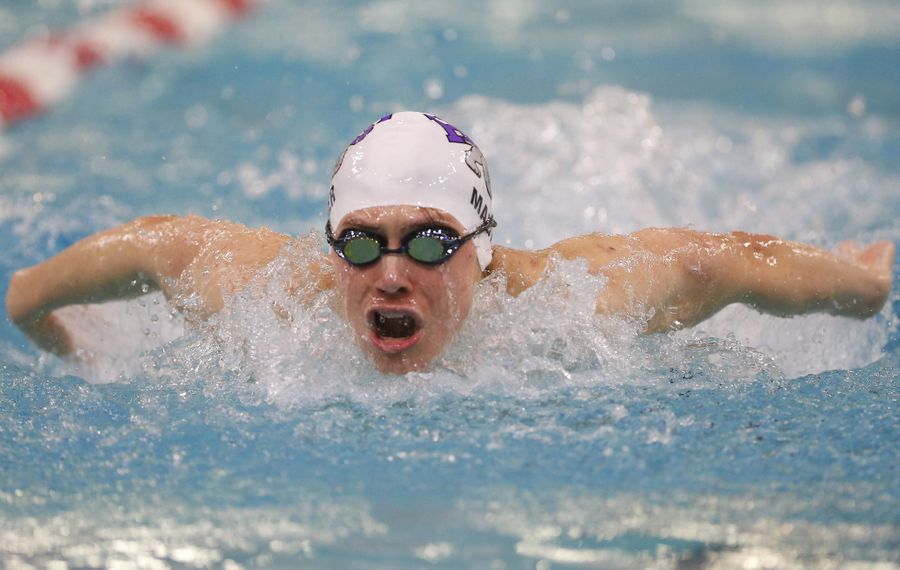 Hamburg boys swimming coach Andy Godios knew his team had a chance to make the state championships in at least three events this year based on returning members from last season.

But looking at his swimmers’ times heading into the 2015-16 campaign, he had a new goal in mind.

“This was the goal, eight events,” Godios said, “and we ended up getting that today. It’s a big positive for our team moving forward to states.”

The Bulldogs got off to a quick start by winning the first event, the 200-yard medley relay, in a school-record time of 1:36.27. Michael Maurer (backstroke), Luke Kennedy (breaststroke), Cody Wittmeyer (butterfly) and Kyle Griffin (freestyle) combined for the win.

The same four swimmers also teamed up to win the 200 freestyle relay in 1:27.83, another school record.

“That was the shocker for us. Coming into the year we thought we’d swim around a 1:31 and now we’re swimming a 1:27,” said Godios, who added he thinks his relay teams could drop another second off their times at states once each swimmer is fully tapered and shaved. “Getting them to states, winning sectionals and really being undefeated all season long was a surprise to us but something we knew could happen if we really focused on it.”

Olean junior Seth Farrand was named the event’s Most Outstanding Swimmer for his first-place finishes in the 100 butterfly and 100 backstroke.

Carol was up in the stands when she heard her son’s name announced over the loud speaker. She couldn’t believe what had just occurred as she bolted her way back down to the pool deck.

“I was up top with my husband and I said, ‘Matt Marsh,’ ” a teary-eyed Carol recalled. “I didn’t think it would happen but I’m very proud of him. He works so hard and he’s deserving.”

The fact that Seth won two events in two unrelated strokes only added to the achievement.

“It’s definitely harder because you have to train in two different strokes during practice,” Seth said, “but it’s mostly about what you’re willing to go for and push for in the end.”

Jamestown senior Matt Marsh, last year’s state champ in the 100 freestyle, was the only other double-winner on Wednesday as he finished first in the 50 and 100 freestyle.

It’s Marsh’s 50 time, though, that’s No. 1 in New York State and not his 100 time, which is currently third and 0.35 seconds off the top spot. He offered a simple explanation.

“Last year I was shaved and tapered for the sectional meet, so I had a pretty good time” Marsh said. “This year I worked through this meet so that’s why it’s like that.”

Marsh will also participate in Jamestown’s 200 medley and 200 freestyle relay teams at states next week after each qualified.

“Last year was the first time we sent relays to states in 10 or 20 years,” Marsh said, “so it’s really nice to repeat again this year.”

After finishing in sixth place in the preliminary round on Tuesday, Williamsville South’s Dan Kuznetsov shaved off six seconds to win the 500 freestyle final.

Other winners from Wednesday include Sweet Home’s Paulo Pereira in the 200 freestyle and Orchard Park’s 400 freestyle relay team of Riley McLaughlin, Alec Hoch, Joe Blake and Drew Deren. Williamsville East’s Tim Finley, who won the one-meter diving final on Tuesday, will also be heading to the state meet.