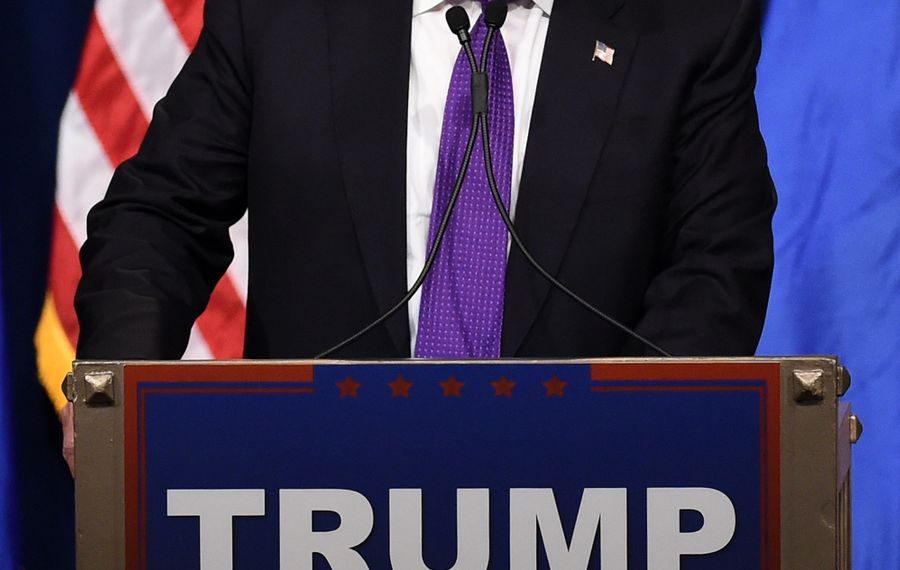 WASHINGTON – Rep. Chris Collins on Wednesday became the first House member to endorse Donald Trump for president, a sign that the Buffalo-area Republican establishment might be starting to line up behind the bombastic billionaire – despite deep concerns about Trump’s positions from some local leaders and GOP political observers.

“Donald Trump has clearly demonstrated that he has both the guts and the fortitude to return our nation’s jobs stolen by China, take on our enemies like ISIS, Iran, North Korea and Russia, and most importantly, re-establish the opportunity for our children and grandchildren to attain the American Dream,” Collins, of Clarence, said in a statement released first to The Buffalo News on Wednesday morning. “That is why I am proud to endorse him as the next president of the United States.”

By midafternoon, Collins was appearing on Fox News to explain his position, and the Erie County Republican Committee had posted a screen shot of his appearance on Facebook, with the headline: “First in the nation.”

County Republican Chairman Nicholas A. Langworthy said Collins’ endorsement reflected the widespread support Trump has in Western New York, but among others who have worked with Collins, the reaction seemed to be: Love the endorser – but not necessarily the endorsement.

The president of the Hispanic Heritage Council of Western New York lauded Collins for working with the group on an important piece of legislation – but lambasted Trump for attacking Hispanics with damaging “one-liners.” And the president of the New York Farm Bureau called Collins a friend of agriculture – but defended migrant farmworkers, saying they are, by and large, good people trying to support their families.

In other words, the Collins endorsement of the front-running New York real estate mogul brought the topsy-turvy race for the GOP presidential nomination to the Buffalo area in a big way.

In an interview, Collins said he decided to endorse Trump when his original choice in the race, former Florida Gov. Jeb Bush, dropped out after a disappointing fourth-place finish in Saturday’s South Carolina primary.

Collins noted a striking similarity between Trump’s campaign slogan – “Make America Great Again” – and the vision statement that the congressman pledged to when he took office in 2013, which says: “The United States of America will reclaim its past glory as the Land of Opportunity, restoring the promise of the American Dream, for our children and grandchildren.”

Comparing those two messages, Collins said: “It’s as if he read my vision statement and simplified it.”

Collins said he gravitated toward Trump rather than Florida Sen. Marco Rubio – the choice of many elected Republicans – because Trump’s business experience is better preparation for the presidency than is serving as a lawmaker.

“We’re electing a chief executive, not a chief politician,” said Collins, himself a millionaire businessman.

Trump has made himself the GOP front-runner with big victories in the New Hampshire and South Carolina primaries as well as in Tuesday’s Nevada caucuses, capitalizing on a series of dramatic, nationalistic campaign proposals and a say-anything approach to campaigning.

Collins said he was particularly drawn to Trump’s proposal to get tough with nations that have been taking advantage of America in world trade.

“We need to grow our way to success, and that means standing up to countries that are cheating,” Collins said.

At the same time, though, Collins acknowledged that he isn’t exactly in lockstep with Trump on all the issues.

For example, Collins did not endorse Trump’s call to deport the nation’s 11 million undocumented immigrants.

“To deport them? No. But we can certainly determine who they are,” Collins said, adding: “I think he’s just talking about a process.”

Collins also disagreed with Trump’s call for a temporary ban on all Muslim immigration.

“At this point, I’m not ready to go that far, no,” Collins said. Nevertheless, he reiterated his call for blocking the admission of new refugees from Syria, noting that FBI Director James B. Comey Jr. has said he could not personally certify that none of the Syrian refugees poses a security threat.

Trump has adopted an unusual campaign style, sometimes spewing profanity from the podium and, on one occasion, mocking the physical disability of a New York Times reporter.

“He’s already promised to stop using language like that,” Collins said. “I’ll call it a transition from the private sector to the public sector.”

That transition seems to have prompted many lawmakers to stay on the sidelines while Trump’s campaign has been gaining steam. But Rep. Duncan D. Hunter, R-Calif., who became the second federal lawmaker to endorse Trump later Wednesday, said that may change soon.

“I think you have more Trump supporters in Congress. They just have to come out of the closet, so to speak,” Hunter told Politico, which broke the news of his Trump endorsement.

Hunter said he’s supporting Trump for a clear-cut reason. “We don’t need a policy wonk as president. We need a leader as president,” Hunter told Politico.

Collins’ endorsement came 11 days after Erie County GOP activists voted in a straw poll that Trump won with a whopping 57 percent share of the vote.

There’s an obvious reason why Trump did so well, Langworthy said. “Donald Trump is saying things on the campaign trail that people have been saying in their living rooms for a long time.”

Nevertheless, some of what Trump says strikes many as offensive. For example, Casimiro D. Rodriguez Sr., president of the Hispanic Heritage Council of Western New York, said he was aghast that Trump said Mexican immigrants “are, in many cases, criminals, drug dealers, rapists, etc.”

The Washington Post Fact Checker called Trump’s claim false, saying that no data exists to prove his point. And Rodriguez said: “The one-liners are appalling. … It’s very disappointing. There are rapists and thieves in all races.”

Nevertheless, Rodriguez praised Collins, saying he had been helpful in making sure a segregated Army regiment, composed mostly of Puerto Ricans, received the Congressional Gold Medal.

Similarly, Dean Norton, the president of the New York Farm Bureau and a resident of Collins’ district, praised the congressman for his advocacy on agriculture issues while taking issue with Trump’s comments on Mexican immigrants.

Many such immigrants have worked on Norton’s farm and others in Western New York, and Norton said farms now face a labor shortage as fewer workers want to come to America via the nation’s legal guest worker program at a time when they’re the subject of political controversy.

“The vast majority of these people are not rapists. They are not murderers. They are here because they want to make money to support their families,” Norton said.

While Rodriguez and Norton were reluctant to criticize Collins’ endorsement of Trump, James E. Campbell, a prominent political scientist at the University at Buffalo and a mainstream Republican, said he was shocked to see someone such as Collins backing a candidate who’s widely seen as the least electable Republican in the field.

And Anthony H. Gioia, a prominent GOP fundraiser in Western New York who is backing Rubio, responded to the Collins endorsement with sarcasm.

Western New York’s two most prominent Republicans who were early to the Trump bandwagon – Buffalo developer Carl P. Paladino and tea party activist Rus Thompson – did not respond to requests for comment.

And neither did Trump, who, before the Collins endorsement, took a swipe at endorsements in general in an appearance on ABC’s “Good Morning America.”