The day the dancing  died

Artvoice’s “Best Place to Dance” in Buffalo of 2014, Allen St. Hardware Store Cafe,  just lost its groove. All that romping and rollicking, it turns out, was illegal.

Allen St. Hardware for years allowed dancing without having a required city dance license. The owner recently applied for the needed license, but Council members Tuesday said the request will be turned down.

"We never had a dance permit, and still don't have one," owner Charlie Goldman said when I called him after the Council decision Tuesday.

Goldman - son of Buffalo restaurateur Mark Goldman - said  dancing was only occurring in the back room of his Allen St. Hardware bar and restaurant. He hadn't known a permit was needed to have patrons dancing to the DJ, he said.

Earlier in the day, Fillmore Councilman Dave Franczyk and a host of city officials met with Charlie Goldman to discuss residents' concerns about his business. The dance floor was only one of them: Loud noise. Parking issues. Patrons leaving the bar and using nearby residential properties as outdoor toilets.

"Hardware Cafe has demonstrated a pattern of operating in a disturbing fashion without proper permits, displayed a clear disregard for neighbors to experience comfort in their homes, and has created an environment that is unsafe for patrons and fails to control the behavior of their patrons in a civil manner," the Allentown Association said in one of several letters to city officials that led to the Tuesday meeting.

Said Goldman: "I met with fire, city planning, police and the councilmen. They treated me fair. We are going to make some adjustments."

That means, among other things, no dancing.

But food and drink are fine, Franczyk said.

From Olmsted to Tapestry

I was just reading about concerns of  some Tapestry parents over the school's plans to move its grammar school students from their current building off Great Arrow Avenue in North Buffalo  to a shuttered city school building on Olympic Avenue,  just off the Kensington Expressway, not far from Bailey.

It reminded me of a sort of inverse situation a few years ago with Olmsted 64 Elementary School, which is located near Tapestry, off Amherst Street. Only in that case, the school district  proposed moving Olmsted students to an available South Buffalo school while the Olmsted 64 building was being renovated. Olmsted parents objected, saying the South Buffalo school was too far away, too long of a bus ride for their young children. So Olmsted 64 parents found an alternative school building for  their students - the Olympic Avenue building Tapestry parents now oppose.

The city school district acceded to the Olmsted parents, and Olmsted took over the Olympic Avenue school for a year or two until renovations to its home school building on Lincoln Parkway finished and it reopened in  September 2013.

Vasilis Pangopoulos was in Council Chambers on Tuesday talking about his  plans to re-open his Greek take-out and ice cream shop, Vasilis Express, on Hertel Avenue at the corner  of  Carmel Road, near Shoshone Park. A few residents expressed concern about noise and parking, but Council members gave the business their needed support. The business now operates as Mighty Moe's. 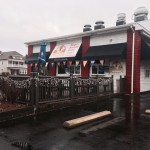