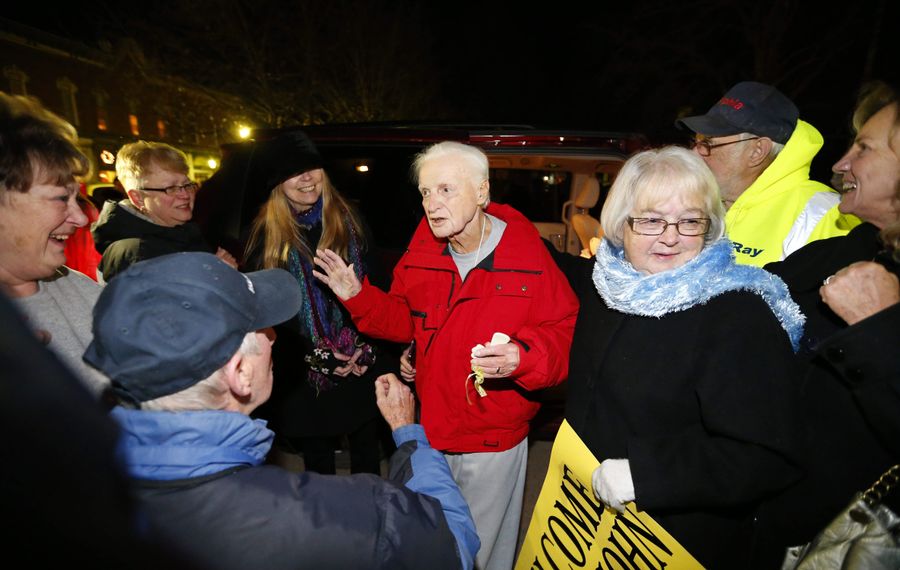 COUDERSPORT, Pa. – You would think the approximately 100 people who lined the streets of this northwest Pennsylvania town Monday night were welcoming an astronaut, or a movie star, or a hero.

It was far from that, though to the people of Coudersport, John J. Rigas is a hero – even as he returned from more than eight years in a federal prison.

Rigas had been sent away from the town he loved for looting his once powerful Adelphia communications company of at least $1 billion. But none of that seemed to matter as Rigas’ SUV approached his hometown.

Dozens of Rigas’ old friends and employees who held welcoming signs in front of the historic Potter County courthouse erupted into thunderous cheers. They swarmed his car shouting “God Bless You, John” and “Welcome home, Mr. Rigas” and “We love you.”

“I can’t believe all these people came out just for me,” he said. “God bless you all.”

Indeed, Coudersport seemed to reveling in the news that Rigas, 91, was home after a federal judge in Manhattan signed an order on Friday night granting “compassionate release” as he suffers from terminal cancer. The former owner of the Buffalo Sabres and of one of the nation’s biggest cable companies, who had been sentenced to 12 years in jail for conspiracy and fraud, walked out of the federal prison at Canaan, Pa., around noon Monday after he was picked up by his son, Michael, and made the approximately 3½-hour drive to his home in Coudersport.

In his hometown, it was almost as if Rigas were leading a parade.

The preparations for Rigas’ return began around 5 p.m. Monday when Midge Houghtaling, a former Adelphia paralegal and organizer of the effort to bring him home, gathered friends at the McDonald’s on Main Street. There, about 15 people crafted signs with messages of love and support that they later distributed to the big crowd in front of the courthouse.

George Hults, the Borough Council president, tried to explain why this town of 2,500 turned out on a frosty night to welcome home a convicted felon. He recalled how Rigas once dispatched the Adelphia corporate jet to Fitchburg, Mass., after he had suffered a heart attack while visiting relatives. His wife, Eunice, added similar examples of Rigas’ acts of kindness.

“That’s the kind of deeds and heart he has had for this community,” Hults said. “Countless numbers of people have the same story.”

Hults then called on his cellphone for a police escort to accompany Rigas’ entrance into town.

The Rev. Janis Yskamp, rector of the Christ Episcopal Church where the Rigas family has been longtime parishioners, said the congregation has been praying for his release for weeks. Now, she said, their prayers have been answered.

Outside Potter County’s 1866 courthouse Monday night were people ranging from little kids who have no clue as to the importance of Rigas to a 100-year-old woman waiting in the cold. Almost all muttered something about “typical Rigas,” who apparently has a reputation for always being late. But it didn’t matter to the people gathered in the streets, who seemed to blame the federal government for making a “poster boy” out of Rigas at a time when Enron and other corporate giants were wallowing in similar crimes.

“Why are we here? Because we love him,” said Moree Haskins. “And besides, Bush went after John Rigas.”

Indeed, President George W. Bush told reporters following Rigas’ arrest in 2005 that it had “been a good day” for the federal government.

But to Cathy Bowers, the crowds were showing up for a man who had been in prison earlier in the day “because he’s just a good guy.”

“His arrest should never have happened,” she said. “He would have fixed things if he had been given time.”

Not all are happy about Rigas’ release. One former business associate emailed The Buffalo News to relate that the former cable czar’s kindly demeanor and “trust me” attitude had wiped away the lifetime investments of thousands of people.

“The problem is, it looks like he was spending our (those who lost) money,” the Coudersport resident said. “Upon investigation, you will find how many lives were disrupted, retirements lost, houses, all lost.”

But in Coudersport on Monday, no such sentiment guided those who cheered when his vehicle arrived. Pete Ryan, a retired dentist who with his wife, Debbie, has visited Rigas in prison many times, said he hoped his old friend would be able to watch his grandson play for Coudersport High School in basketball playoffs on Wednesday. He missed all his other grandsons’ games.

“It would be great for him to be able to do that,” he said.

Leon Reed was in front of the courthouse too. He recalled fixing Rigas’ “beat up Chevy” when Rigas first came to Coudersport in 1951.

“He told me ‘I hear you’re a good mechanic and I want you to fix my car,’ ” Reed recalled. “But he said he could not pay until a week from Saturday. But he paid me.”

“The congressman thanks the professionals at the Bureau of Prisons and Department of Justice for their cooperation in the process,” Ruffner said.

Philadelphia lawyer Lawrence G. McMichael said he worked feverishly all weekend with Bureau of Prisons officials and the U.S. Attorney’s Office in Manhattan to facilitate his client’s release. McMichael has represented Rigas and his son Tim, who remains incarcerated at Canaan in northeast Pennsylvania.

He said the federal prison system’s mission is to keep their prisoners behind bars and not let them out. But he said the bureau and Department of Justice have proven accommodating in obtaining the compassionate release, granted on occasion to prisoners deemed no threat to society and nearing the end of their lives.

“It was a real team effort,” McMichael said. “We were all on the same team here. We just had different jobs to do.”

McMichael said Rigas’ son Michael, another former Adelphia official who avoided prison by pleading guilty to falsifying records and who has been working furiously behind the scenes for his father’s release, drove to Canaan with other supporters in a separate car. Though Michael Rigas had suggested procuring an ambulance to transport his father home across Pennsylvania, McMichael said the elder Rigas “definitively rejected” that idea.

McMichael said Rigas is suffering from the effects of the cancer that has wracked his bladder, kidneys and lungs for several years. He tires easily, the attorney added.

The attorney acknowledged that one aspect of the Rigas homecoming will be shaded by a major element of sadness. For the past eight years, John and Tim Rigas have shared adjacent bunks in a small cubicle at the military-style prison camp at Canaan and two other facilities. Tim Rigas still must serve the rest of his 17-year sentence that he continues to appeal.

When they were slated to say goodbye at 12:15 p.m. Monday, McMichael acknowledged that barring unforeseen developments or the possibility of future visits, it is likely Monday morning was their last together.

“It’s sad,” McMichael said. “He’s probably not going to see his father again unless Tim gets out. But Tim is a big advocate for the release and wants what is best for his father.”