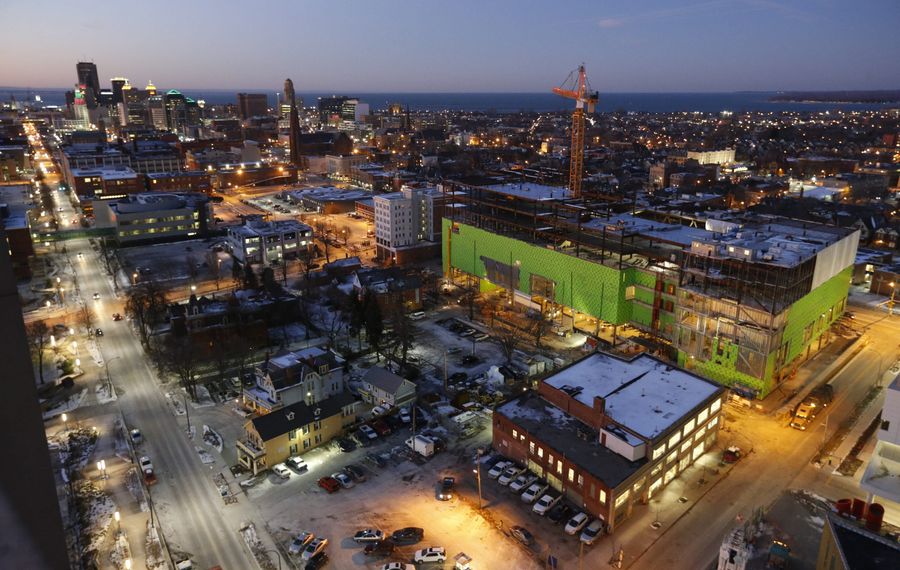 Ciminelli Real Estate Corp. is moving forward with development plans for a new Medical Campus project, as it seeks an architect to design a new multistory building across from its successful Conventus facility.

The developer wants to knock down the old Langston Hughes Institute building at 33 High St. and replace it with a much larger complex to capitalize on the growth of the Buffalo Niagara Medical Campus.

The proposed new facility would be similar in size and use to the seven-story Conventus, which is now open at 1001 Main St., at the corner of High Street and diagonal to the Langston Hughes property. The building serves a mixture of clinical, research and academic purposes.

Officials have talked of a 250,000-square-foot building, and Dennis Penman, executive vice president at Ciminelli, said the cost would likely range from about $100 million to $125 million.

By comparison, Conventus, with 340,000 square feet, was priced at $110 million for the structural “core-and-shell,” but the final cost will be closer to $175 million after all the space is built out, because of the higher cost of research facilities and plumbing for clinical space, Penman said.

Conventus includes office, research, academic and clinical space for a host of tenants, including Kaleida Health and UBMD, which will occupy the second through fifth floors. The building also houses the corporate headquarters for drugmaker Athenex on the sixth floor and part of the first floor, as well as research space for a drug and technology innovation hub on the seventh floor. The latter is anchored by Albany Molecular Research Inc. and Massachusetts-based PerkinElmer, as part of the state’s Buffalo Billion economic development initiative. It also has two levels of underground parking for 318 cars.

The new facility would be somewhat smaller than Conventus, with floors of just under 40,000 square feet each. The site currently has a 28,500-square-foot, three-story building that was constructed in 1926, as well as adjacent parking lots on Washington Street. Langston Hughes sold it for $1.9 million in 2010 to Ciminelli, which initially used it as its construction office during the Conventus project.

Ciminelli issued a request for proposals to architectural firms across the Northeast and Chicago, and is now considering bids from about a dozen firms. That includes two primarily local bids, plus three or four partnerships between national or regional firms and local firms. The rest are entirely from outside Western New York, Penman said.

Representatives of the firms came to Buffalo last Friday to tour the Buffalo Niagara Medical Campus, Gates Vascular Institute and Conventus, and also met with Kaleida officials. Ciminelli executives will now review the proposals over the next few weeks and narrow the field to a short-list by mid-April. A final selection will be made in May, at which point work will advance over the summer to formal designs.