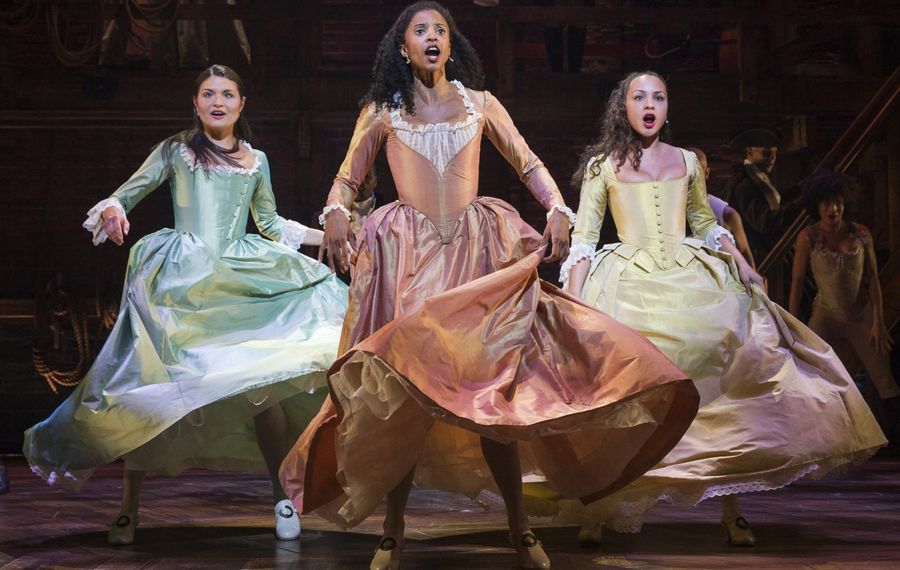 It’s hard to find a Broadway musical that bears much resemblance to America.

The Great White Way, aptly named and outrageously priced, is not especially well known for reflecting the remarkable diversity of the country in ways that transcend tokenism.

The unlikely show by Lin-Manuel Miranda, now six months into an extraordinary Broadway run likely to extend well into the next decade, takes a refreshingly radical approach to storytelling both in its polyglot presentation and its politically sly casting. Radical for Broadway, at least.

Via the urgent language of hip-hop, “Hamilton” reconnects the wayward American dream to its immigrant roots. It doesn’t shy away from what the actor Stephen McKinley Henderson calls the country’s “birth defect” of racism. To that end, it features people of color in the roles of the country’s Founding Fathers, a direct assertion that the story of America as we know it belongs as much to the descendants of Thomas Jefferson as those of the slaves who toiled under him at Monticello.

And the fact that it has registered with audiences across the country more than any musical since “Rent,” an equally energetic if inferior theatrical product that debuted to worldwide acclaim in 1996, is evidence that theatergoers have long been hungering for its message.

That hunger was reflected in the young and diverse crowd that lined up outside the Richard Rodgers Theatre before Wednesday’s matinee performance in hopes of scoring last-minute cancellation tickets. They’d flown in from Seattle, driven from Maine or taken the 2 train from the Bronx, lured by the promise of a show that speaks to them in a language they can understand.

The remarkable cross-cultural appeal was evident in that crowd, which ranged from nontraditional theatergoers to Broadway addicts thirsting for the latest, greatest thing. A pair of college students from Maine made a pilgrimage to the theater in hopes of scoring a lottery ticket. They didn’t win but were in high spirits as they waited for the phantom prospect of cancellation tickets to materialize.

“My boyfriend hates musicals and he listens to ‘Hamilton’ with me. It’s that kind of crossover,” said Kassidy Giggey, who drove to New York with her friend and fellow University of Maine Farmington student Christina Hallowell after months of listening obsessively to the immensely popular “Hamilton” cast album. “It makes history really interesting. It’s just this different take on telling a story about history and I think it’s appealing to everyone.”

As boilerplate as that praise may sound, it’s actually central to the show’s success: Its relative radicalism works on its fans surreptitiously, without their knowledge, providing not just hummable tunes but a sense of political purpose.

For the Lackawanna-born playwright, actor and director Ruben Santiago-Hudson, who is directing an acclaimed off-Broadway production of Dominique Morriseau’s “Skeleton Crew,” the success of the show represents a long-overdue mainstream embrace of work by black and Latino voices. Asked if there were new glimmers of hope for a truly cross-cultural commercial theater after “Hamilton,” he responded optimistically.

“There’s always glimmers of hope when you have Lin-Manuel Miranda, when you have George C. Wolfe, hopefully when you have Ruben Santiago-Hudson. There’s always hope, and it’s not just glimmers. Because we refuse to stand pat and deal with the status quo. We are always pushing the envelope,” he said. “It brings me a tremendous sense of pride because I’ve seen the growth of Lin-Manuel, and I also see how he gives back,” Santiago-Hudson said. “He creates opportunities through his opportunity. The thing we must do as people of color is create opportunities through our opportunity. But that doesn’t just stop with us.”

The cultural gatekeepers, Santiago-Hudson said, are finally coming around.

“Those that are in power, when they’re concerned, and open up that door, and give access to a multifaceted society, then we do well,” he said. “That’s what it comes down to: We’re all the same. We’re all parents, we’re all sons and fathers of sons and mothers and nurturers. And once we all come to that, animosity just disappears, anger just disappears, racism just disappears, ignorance disappears.”

And thanks to “Hamilton,” a cultural phenomenon that extends far beyond the traditional borders of Broadway, perhaps much faster now.