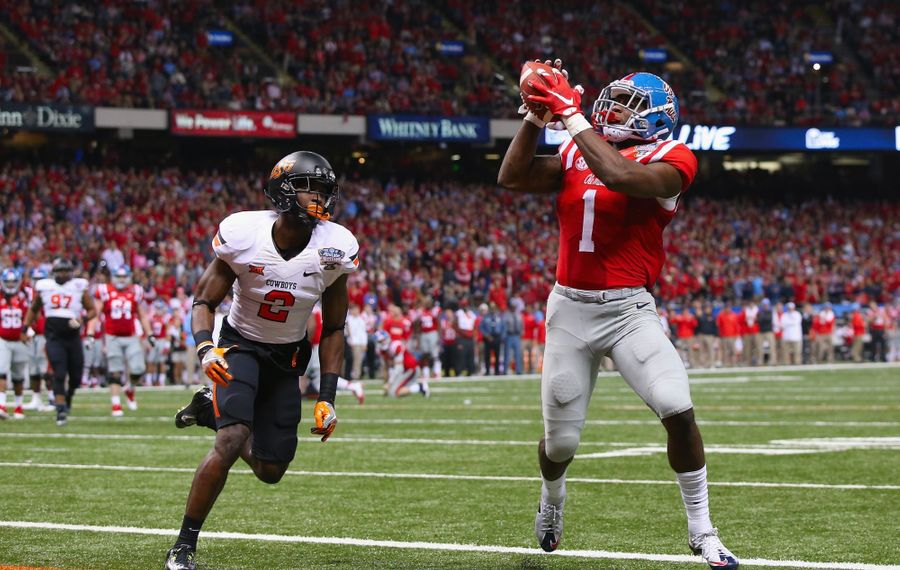 The News will profile prospects leading up to the NFL Scouting Combine in Indianapolis.

It is the kind of play that should come with a warning on YouTube.

In a 2014 battle between the No. 3 and No. 4 teams in the country, Laquon Treadwell caught a receiver screen and turned upfield. There was 1:37 remaining and his team trailed, 35-31.

The Ole Miss wide receiver stormed toward the end zone, was pulled down from behind and his left leg was caught underneath a tackler in gruesome fashion.

On the spot, his season was over with a broken fibula and dislocated ankle. He fumbled, too, and Ole Miss lost.

“He was upset he didn’t score the touchdown more than his injury,” Ole Miss wide receivers coach Grant Heard said. “He was more hurt about that.”

Yet in a strange way, that injury may be the No. 1 reason Treadwell is now dubbed the No. 1 receiver prospect in the 2016 draft.

“As bad as it sounds, the injury probably helped him,” Heard said. “It made him realize that football can be taken away from you – you’re always one play away. For him to have that taken away from him, made him respect the game more and made him cherish every moment out there because he didn’t want to waste a rep.”

If Treadwell lacked a true commitment before, he didn’t anymore. The arduous road back to the field changed him. He lost 25 pounds while maintaining his strength. Mentally, he returned stronger. Treadwell was back by Ole Miss’ 2015 season opener and improved on that surgically repaired leg as the season progressed, finishing with 82 receptions for 1,153 yards and 11 touchdowns.

Over one stretch, Treadwell had five straight 100-yard games and he capped the season with a three-touchdown masterpiece in the Rebels’ 48-20 bowl win over Oklahoma State.

Yeah, he was talented. Always was. A five-star recruit out of high school, Treadwell played in the cornerback-loaded SEC immediately as a freshman. But the injury triggered a competitiveness inside of him. Suddenly, he’d hate it whenever Heard pulled him out of any drill at practice.

“He knew it’s a violent sport, but it’s something you have to respect,” Heard said. “And when you’re out there, you have to go 100 percent because, you never know, it might be your last play.

“His mindset changed and he decided he was going to attack it. He attacked his rehab, the surgery. He just went at it as hard as he could.”

As Treadwell told the Chicago Tribune, “It was me coming back to reality and realizing how important every moment on the field is.”

Listed at 6-foot-2, 210 pounds, the receiver isn’t just big — “he plays big,” the coach says. He plucked a touchdown over the head of cornerback Cyrus Jones for a 24-yard touchdown in handing eventual champion Alabama its only loss, the kind of play that screams Julio Jones, A.J. Green. He won over the top, he stopped on a dime to lose corners, he hauled in one-handed catches like one touchdown against New Mexico State.

Heard believes Treadwell does fit that Jones mold as “a big, physical bully out there that can take over a game.”

Similar to Brandon Marshall, he gets physical at the top of routes. And post-broken leg, he started mauling defenders as a blocker.

“When he blocked, he took it personally,” Heard said. “He tried to impose his will on those DBs. He did an awesome job in taking pride in a part of the game that most wideouts don’t. … We don’t block a whole bunch but when we did, he took pride in it and wanted to be great at it.”

Now, Treadwell could be a Top 10 pick. If, somehow, he slips through the cracks to No. 19 overall, the Buffalo Bills have made it clear they’re in the market for another receiver. Former NFL scout Daniel Jeremiah has Buffalo taking Treadwell in his latest mock draft. Either way, a serious recommitment paid off.

Not that he’s a perfect, polished final product. Heard said Treadwell must improve his route running.

“Getting in and out of his breaks,” he said. “That comes with time and reps. Rep after rep after rep. Just attacking the mental part of the game and making sure you’re on top of it because that league is more mental than anything. Your athletic ability will only take you so far. You’ve got to be ready for it.”

True, one or two supposed can’t-miss receivers enter the NFL Draft virtually every spring. Talent’s never an issue, rather, what drives that player can be. That’s why in 2012, the owner of the No. 7 overall pick had a scout sit in the back of Justin Blackmon’s favorite bar for a week before the draft.

“It wasn’t just casual drinking,” Dominik said. “Here’s a guy getting ready for the draft – what’s he doing at the bar all the time?”

Jacksonville took the Oklahoma State wideout No. 6 overall and he has played in only 20 games since going through a haze of DUIs and an NFL suspension for substance abuse. To this day, Blackmon remains indefinitely suspended by the league.

It appears Treadwell is at least trending that direction.

“He wants to be great, wants to be the best, so he works at it,” Heard said. “He’s not going to let anyone outwork him, so he goes out there every day and competes.”

Five other wide receivers to track at the NFL Scouting Combine in Indianapolis:

• Corey Coleman (Baylor): Could post some eye-popping numbers at the combine. Coleman has speed to burn, averaging 17.5 yards and 18.4 yards per reception the last two seasons. Had four games of at least three touchdowns last fall.

• Josh Doctson (TCU): Transfer from Wyoming is a long 6-3, 195. Averaged 132.7 yards per game last season, often beating his man on vertical routes. While he might not wow scouts in Indy, he had the look of a dependable, sure thing in college.

• Will Fuller (Notre Dame): He’s another deep threat in a draft full of them, averaging 20.3 yards per catch in 2015. Fuller routinely burnt cornerbacks late in his routes to gain separation. Potential first-rounder.

• Braxton Miller (Ohio State): A wild card. The former quarterback flashed plenty of burst and explosion during Senior Bowl week and could be an ideal weapon in the slot, where multiple former quarterbacks (such as Julian Edelman) have excelled.