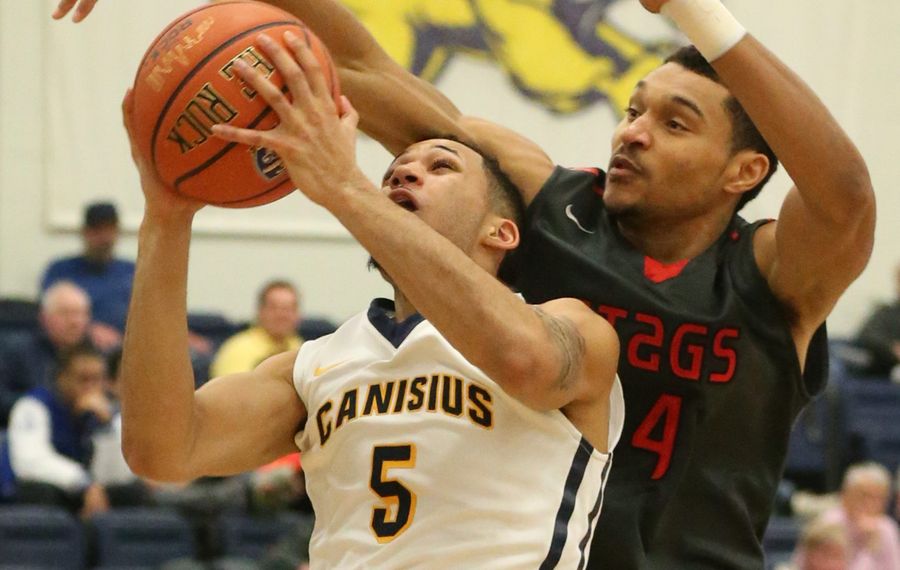 Fairfield shot 60.9 percent in the second half to win its fourth straight and its seventh in the last nine games.

Canisius had a chance to tie the game at 71 with 7.6 seconds left, but a 12-foot shot by Griff guard Kassius Robertson fell short.

The Griffs lost their third straight and their seventh in the last eight games.

Nevertheless, Canisius coach Jim Baron said he was not discouraged by the defeat. The Griffs rank ninth in the Metro Atlantic Athletic Conference in points allowed and have endured some ugly defensive outings. This wasn’t one of them.

“I was real impressed with how hard our kids played,” Baron said. “We did a good job of rebounding the basketball. We outrebounded them by seven. I thought our intensity was great.”

“I told our kids, we’re right there,” Baron said. “You gotta stay focused, you gotta stay positive and optimistic. ... We battled them the whole game and just fell short.”

Records: The Griffs fell to 11-17 overall and 6-11 in conference. Canisius stands tied for eighth with Quinnipiac in the 11-team MAAC with three regular-season games to go. Fairfield improved to 16-11 and 10-7. The Stags stand fifth.

Three-pointers: Fairfield ranks 27th in the nation with 9.2 three-pointers a game and hit 10 of 24 from behind the arc. The big shot for the Stags came with 3:42 left when sophomore guard Tyler Nelson hit a corner three to put Fairfield ahead, 68-62. Nelson initially got the ball in the left corner. Then five passes later, with the ball not touching the floor, he got the ball in the right corner for the open shot.

“Originally I had it in the other corner and I had a shot,” Nelson said. “But coach has been preaching lately 50 percent shots, not 30 percent shots. Open shots. We know if we move the ball that’s what we’re going to get. We made the extra pass and it wound up coming back to me.”

Up and coming: Fairfield got 22 from Nelson, 17 from senior forward Marcus Gilbert and 15 from freshman guard Curtis Cobb. The Stags look like they could become a force. Six of their top seven players are freshmen or sophomores.

Top Griffs: Canisius got 15 points from senior guard Malcolm McMillan, 14 from senior center Kevin Bleeker, 13 from Robertson and 10 from junior forward Phil Valenti. Bleeker had three impressive dunks, one on a pump-fake and drive from the top of the key.

Late stops: Canisius shot 58 percent from the field in the first half but just 33 percent in the second. After a Bleeker jam pulled Canisius within 63-62, Fairfield stopped the Griffs on six of their last 10 possessions.

Baron thought the Griffs worked the ball for decent shots much of the second half.

“In our huddles late in the game,” Nelson said, “we were just saying we were trading buckets. The team that got the most stops down the end was going to have the best chance to win this game.”

Benched: Baron pulled McMillan and Kiefer Douse from the starting lineup due to violation of team rules. Chris Atkinson and Jamal Reynolds started in their place. McMillan entered 6:30 into the game, Douse 10 minutes in. ... Fairfield’s fourth-leading scorer, freshman Jerry Johnson, was not with the Stags due to the death of his father.

Up next: Last-place Marist visits Canisius at 3 p.m. Saturday. The Griffs host Niagara at 8 p.m. Thursday.