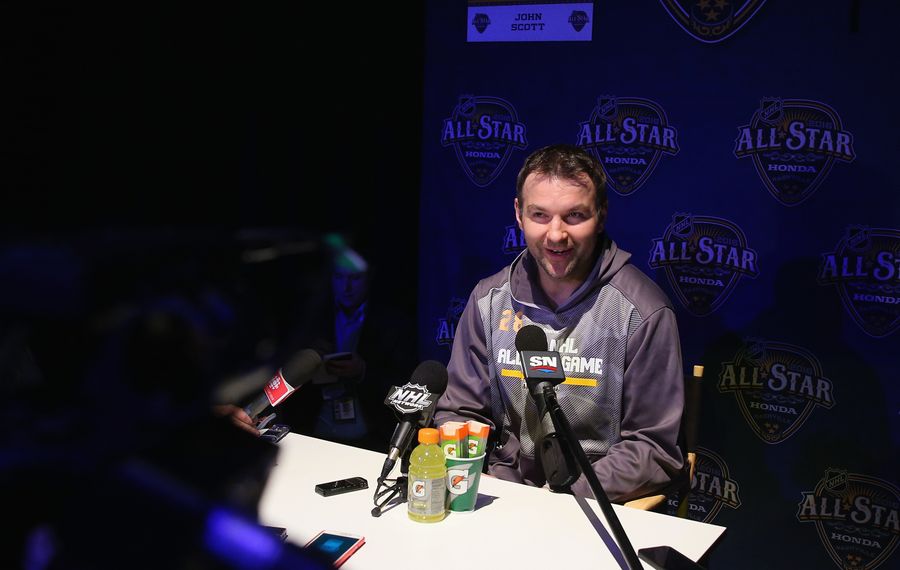 NASHVILLE, Tenn. – John Scott is here. And because the NHL clearly didn’t want him to crash its All-Star party, he’s now one of the featured attractions.

The man without a team got the main spotlight Friday at Media Day in Bridgestone Arena. Voted by fans as Pacific Division captain in what started as an Internet lark, the veteran enforcer was traded by Arizona to Montreal – and then shipped to the Habs’ AHL affiliate in St. John’s, Newfoundland – in what clearly looked to be an orchestrated attempt to remove him from this game and maybe from the sport altogether.

But a funny thing happened to the 6-foot-8 behemoth with five goals and 542 penalty minutes in 285 career NHL games. No one was laughing anymore. Word spread his wife was pregnant with twins and due in the next week or so. There aren’t many flights from Phoenix to the Atlantic time zone. He suddenly became very human.

Public pressure grew. Players voiced support. The league caved. And then Scott drilled them in a first-person piece published Thursday on Derek Jeter’s website, The Players Tribune. The most eye-popping accusation was when Scott said he received a call from an unnamed NHL official who asked, “Do you think this is something your kids would be proud of?”

Wrote Scott: “That’s when they lost me. That was it, right there. That was the moment. Because, while I may not deserve to be an NHL All-Star, I know I deserve to be the judge of what my kids will – and won’t – be proud of me for.”

“Now that I’m here, they’ve been very welcoming,” Scott said of NHL officials. “I sat down with Gary and we had a quick chat. He said, ‘We’re happy to have you here, we’re going to have a good time, make the best of it and just have fun in Nashville.’

“We just had a quick talk. I think he was worried about me not feeling welcomed here and feeling uncomfortable in this whole situation.”

Bettman confirmed the crux of the chat with the Associated Press on Friday and noted, “The fans spoke, and we’re happy to reflect their will.”

In places like Buffalo where Scott has played, he’s a beloved figure in dressing rooms and front offices and a favorite among the media. We’re talking someone who studied mechanical engineering at Michigan Tech. If all you know about John Scott is what you remember from that silly 2013 preseason brawl in Toronto when Phil Kessel tried to tomahawk chop his legs, there’s a lot more to him.

He’s got two daughters under the age of 5. He’s made an eight-year career in the NHL when, as he wrote in the Players Tribune, by age 30 he thought, “I’d be sitting in an office at GM back in sleepy Ontario, in my suit, and happy as hell about it.”

Now, Scott’s story has gone across North America. More people know him than ever before. And for some good reasons.

“It’s nice because people have a persona of me,” Scott said. “I’ve had big incidents in hockey like the Kessel thing and suspensions people see that and say, ‘This guy is an animal. He’s just a goon.’ It’s nice to get a bigger scope and have people say, ‘He’s a nice guy and he’s down to Earth. At the end of the day, he’s kind of a family guy who worked his way up and was happy to be here.’ It’s nice to get this kind of opportunity.”

What really bothers Scott even more than the way the NHL has handled this whole situation? The word “goon.”

“That’s just a guy who’s brain dead, goes out and fights, doesn’t really know how to play hockey,” Scott said. “It’s really a derogatory term. I don’t like when people call me a goon. I hate it when articles say, ‘Oh, the goon John Scott.’ You get that label and it sticks.”

Players here this weekend are universally in Scott’s corner. It seems like they’re amused by the way he’s tweaking the NHL’s dinosaur establishment that is still apparently trying to figure out this thing called the Internet. The league could have easily stopped this train long before it left the station.

“He did a great job of presenting himself to the league and being able to come to the game,” said South Buffalo native Patrick Kane, a former teammate of Scott’s in Chicago. “Why not? He’s voted in. He’s a fun-loving guy and he’ll represent the game well and try to do the best as he can when he’s here so why not have him here? It will be cool for him and his family to look back on it in future years and enjoy this weekend.”

“Even with Johnny being a tough guy, there’s not a nicer guy around,” Burns said. “He’s really intelligent with his background. It’s good for fans to see that. For us, we see all these tough guys are teddy bears, the nicest guys off the ice. That’s the case with Johnny. People will enjoy getting to know him. He’s a piece of work, that’s for sure.”

“The guy is like everybody else. He’s worked incredibly hard to be where he is,” said Florida goalie Roberto Luongo. “If the fans voted him in, he deserves to be here. We want to see what’s going to happen too. If I was the NHL, I’d put him in every skills competition tomorrow night. That’s the logical thing to do, right? Fastest Skater, Hardest Shot, Accuracy, let’s get him in all of them.”

Scott, the ultimate fourth-liner, had a good laugh when that comment was relayed to him.

“I tried to put myself in the Accuracy and I think I got bumped from that,” he said. “I’m in the Hardest Shot and something else. They’re always editing the stuff. Guys don’t want to do this or that. There’s just a lot of prima donnas here.”

The gathered media howled at that crack. Scott knew he was working the crowd well and kept going.

“I tried but these guys are very funny about not having me in all the skills,” he said. “I wanted to put my eggs in as many baskets as I could to win some prizes but I guess it’s obvious I’m not going to be in the Fastest Skater.”

And how in the world is Scott going to survive the 3-on-3 game Sunday?

“That’s the question of the day. I don’t know,” he said. “I’ve never played it so I can’t really tell you. I guess I’ll have to just wing it.”

“I’m sure he’s going to want to win that game more than anybody else,” Luongo said. “A lot of this stuff is undeserving, what he’s received as far as treatment. He looks like he’s having a good time.”

“I hope the fans cheer and they’ll take it for what it is,” Scott said. “It’s obviously an anomaly. I’m not the typical All-Star. I hope they have fun with it and they kind of get behind me a little bit.”

Scott warned reporters near the end of his session not to move from his podium because he wanted a picture of them. And he was serious. The questions finally over, Scott said, “That’s it?” Then he whipped out his phone.

“All right, don’t move, don’t move,” he said as his shutter clicked. “Hold on. Everyone smile. OK, thank you. Very cool.”

Scott then asked an NHL operative to take a picture of him at the podium. “Make sure you get my name in it,” he said, referring to the name card on the backdrop behind him. But it had to be done fast, he was told, because he had to go across the room for a live interview on NHL Network. Guarantee you they’ve never asked for him before.

He couldn’t stop smiling. This will be the only All-Star Game John Scott will ever get into without a ticket. There’s a chance it might even be the last NHL game he ever plays in.

So Scott is living in the moment after a whole lot of folks laughed at him, made fun of him and flat out tried to do him wrong.