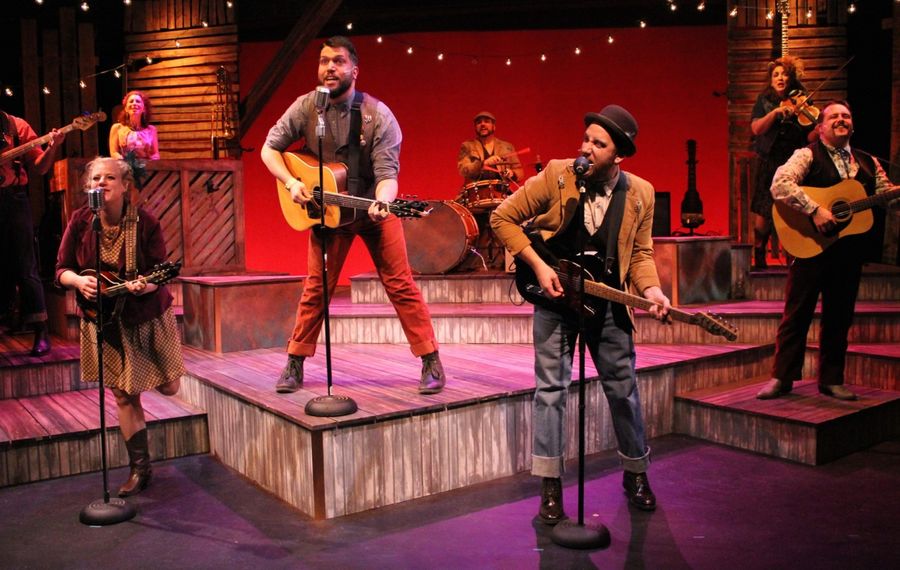 The latest version of “Ring of Fire,” the Johnny Cash tribute show, is pared down and pepped up, and it plays out on stage as a celebration of Cash, not as an embodiment of him.

He probably would prefer it this way.

The “Ring of Fire” now playing at MusicalFare Theatre, looks like a production that his biggest fans would put together, with none of them mistaken for the Man in Black himself.

It makes for a most enjoyable and unexpected show. The eight skillful musicians – five men, three women – arrive on the set by way of Mumford & Sons’s closet, all costumed in bluegrass attire as they sing and reminisce about Cash’s hardscrabble roots.

And in their down home way, they make sure we are all invited to this party – the lights stay up as the performers come out, they say a fine howdy-do and let the audience know “We can see you!” In other words, everybody relax.

The opening song “Country Boy” has a fresh and youthful sound, reminding us of Cash before life had worn him down and rung him out. The mood is festive and brief. The show is sparse on narration, but it interrupts the tunes long enough to say that Johnny’s brother Jack was killed when Johnny was 14. “The funeral was on a Sunday, the family was back in the fields picking cotton on Monday.”

No wonder Cash and the Tennessee Two first sang a gospel song for Sam Phillips when they went to his record company. But Phillips wanted something else, and thus we get a great version of Cash’s first hit, the seldom heard “Cry, Cry, Cry.”

Overall, there are more than 30 songs delivered with effortless expertise by the remarkable cast. One wonders if there is any instrument that Katie Clark can’t play – we see her with guitar, mandolin, violin, saxophone and assorted percussion pieces.

She has a voice to match, and is a stand-out in a talented troupe. It isn’t everyone who can pull off singing “(I’ve Been) Flushed From the Bathroom of Your Heart” without cracking up.

The guys – Steve Copps, Kevin Craig, Bob Mazierski, Zak Ward and Philip Farugia – take turns voicing Cash’s parts. All have beards – if Cash ever did, it wasn’t for long – and none have his gravelly baritone, so there is no pretending to imitate here while they interpret in their own fine voices “Man in Black,” “I Walk the Line,” “If I Were a Carpenter” and, yes, “Egg Suckin’ Dog.”

Rounding out the cast are Maggie Zindle, crossing over from the classical to perform outstandingly on violin, er, fiddle, and the versatile Theresa Quinn, who plays piano, sings and, with Farugia, was musical director of the show.

The two-hour show goes by like a fast-moving train, carry us along with it and leaving everyone with a grand choice of tunes to be humming on the way out.

But most memorable of all from this show was the musicianship of the cast, particularly Ward when he played the blues and the entire ensemble on numbers such as “Going to Memphis” and “Jackson,” among many others. They make you want to hand an instrument to every kid you see so they can learn to play, and to dust off your own and have some fun.

The music of Johnny Cash through Feb. 28 at MusicalFare Theatre, Daemen College, 4380 Main St., Amherst. Tickets are $41 through musicalfare.com.