Those intrigued by the new holistic health offerings in downtown Buffalo dropped in to the new Delaware North headquarters Thursday evening for an open house at the Osteopathic Wellness Medicine of Western New York.

Dr. Leonard Kaplan, an osteopath certified in physical and rehabilitative medicine, owns the practice and has pulled together yoga instructors, physical therapists, nutritionists and other specialists in the newest concierge and alacarte medical practice in the region.

Kaplan opened the practice several weeks ago at 235 S. Elmwood Ave., Suite 120, on what he called the “quieter side” of the headquarters that continues to take shape between Elmwood and Delaware avenues at Chippewa Street. The new digs include a presentation room, where Kaplan outlined his services for a steady stream of visitors; a small kitchen where nutritionists will work with clients, a yoga studio where Megan Callahan, owner of Yoga Parkside, and her fellow instructors will lead classes; and a physical therapy studio that contains a self-propelled treadmill, exercise bike, TRX resistance bands, kettle bells and a Spine Force apparatus that will allow Walter Brown and other physical therapists to help stretch patients in a number of meaningful ways.

“It has a spectrum of applications,” Brown told visitors. 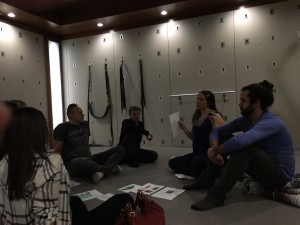 Callahan, subject of a May 2014 Refresh story, and her staff will lead therapeutic and vinyasa yoga classes. Some will employ yoga props, including a ballet barre and straps that can be hooked into the studio walls, giving students with limitations a more manageable means to get into yoga poses.

Visitors were asked to remove their shoes before entering the studio.

Callahan, who is 21 weeks pregnant, teaches pre- and post-natal classes at her main location, Parkside Lutheran Church, 2 Wallace Ave., and hopes to bring similar classes soon to Osteopathic Wellness Medicine. She will start teaching classes in the new studio on Monday. Find a schedule at wnyosteowellness.com.

“And if you were a yogi who never picked up a kettlebell, here you can do that,” Callahan said of offerings at the practice.

Kaplan began his medical career with the U.S. Army and worked at Buffalo Spine and Sports Medicine before he set out on his own in 2014. He moved his practice from Clarence to Elmwood Avenue in December. He specializes in conservative, non-pharmaceutical methods to help control pain and chronic conditions. His new 2,300-square-foot office also includes three clinical suites.

He is among few physicians in the region who have jumped to concierge medicine – in which patients pay out of pocket for treatment that often includes annual wellness packages – though he continues a more traditional part-time practice out of an office in the Dent Tower in Amherst.

He said he is particularly excited about nerve prolotherapy, in which he injects into damaged nerve areas a mixture of dextrose, a complex sugar often used in emergency room IVs, and mannitol, which is used to help stabilize trauma patients. Those treatments help heal and regrow protective nerve coverings, he said. On Thursday night, he talked about treating a veteran runner who’d damaged his knee and managed to participate in a triathlon after five treatments.

Each treatment costs $175, he told me for a previous story, and generally produces lasting results within five to 10 treatments.

For more information on the practice, visit wnyosteowellness.com.