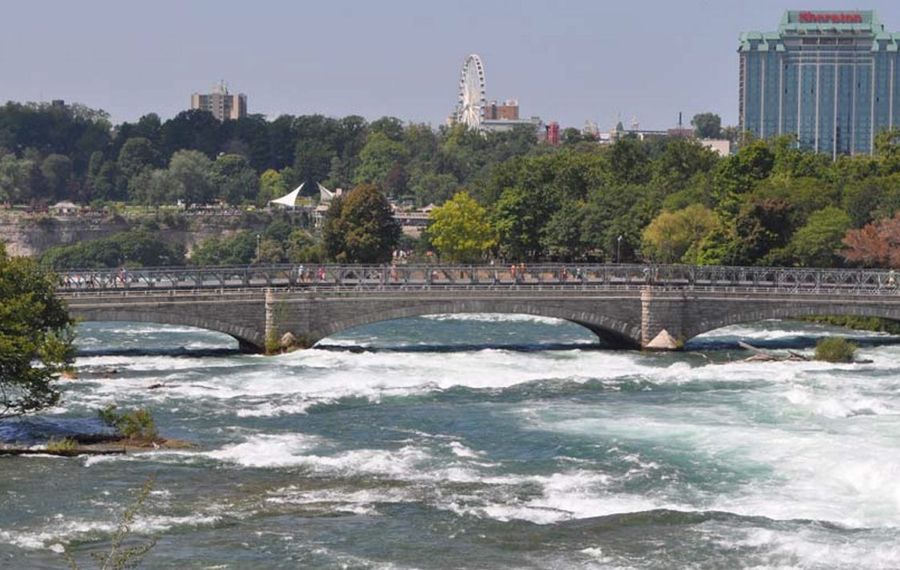 Question: What do you call a famous waterfall with no water going over it?

One of the world’s most famous waterfalls is going dry in a few years. If planners have their way, the American side of Niagara Falls will be turned off so that work crews can safely replace two pedestrian bridges more than a century old.

For the first time in 50 years, onlookers will be able to see, maybe even walk on, the riverbed that normally sends millions of gallons of water per minute over the precipice, only yards away.

It won’t be as dramatic as the falls, themselves, but as a temporary anomaly – and a public curiosity – it is liable to be an even greater draw. The falls have been roaring for millennia, there to be seen at will. To experience the bare riverbed as it was seen for a few months in 1969 is but a once – or twice – in a lifetime opportunity.

The American Falls were, in fact, shut off in 1969 in an effort to study the effects of erosion and the buildup of rocks at the base of the cliff where, when nature has its way, water falls. The feat was accomplished through the construction of a cofferdam that diverted the flow of water that normally surges between Goat Island and the City of Niagara Falls, directing it instead to the flow that cascades over the Canadian Horseshoe Falls.

In the end, the decision was to leave nature to its course. This time, the job is more practical: Replacing two deteriorating stone arch bridges that link the New York mainland to Goat Island.

The bridges are 115 years old and were in such bad shape 12 years ago that they were covered with temporary truss bridges to provide safe passage for pedestrians, park vehicles and utilities. Those bridges, which are not at all in keeping with the aesthetic established by Frederick Law Olmsted, are displeasing to the eye in addition to being unsafe.

So they need to be replaced, with bridges designed to complement the Olmsted vision. Two of three proposals to do that would require turning off the falls.

Often, work such as this is disruptive to the economy. Businesses can pay a price when major roadwork is conducted on their streets, for example. Handled properly, though, the dewatering of Niagara Falls can be a tourism windfall.

Imagine the possibilities of guided tours across the riverbed, a chance for average tourists to declare, like Nik Wallenda, that they walked across Niagara Falls. Perhaps the Cave of the Winds walkway at the base of Goat Island could be extended across the falls to Prospect Point. What a stroll that would be. Getting that close to the riverbed would require a sturdy cofferdam, but surely the increase in tourism would make that worthwhile.

There could be festivals, science labs, special promotions and other opportunities to grab public interest beyond the attraction of the falls, themselves – which will still be thundering away on the other side of Goat Island.

If approved, the project would not begin until 2019 at the earliest, giving tourism agencies plenty of time to figure out how to capitalize on it.

It will be great to again have safe, attractive pedestrian access to Goat Island. And the long lead time will allow state and city planners to make maximum benefit from what will be a marvel of technological achievement.