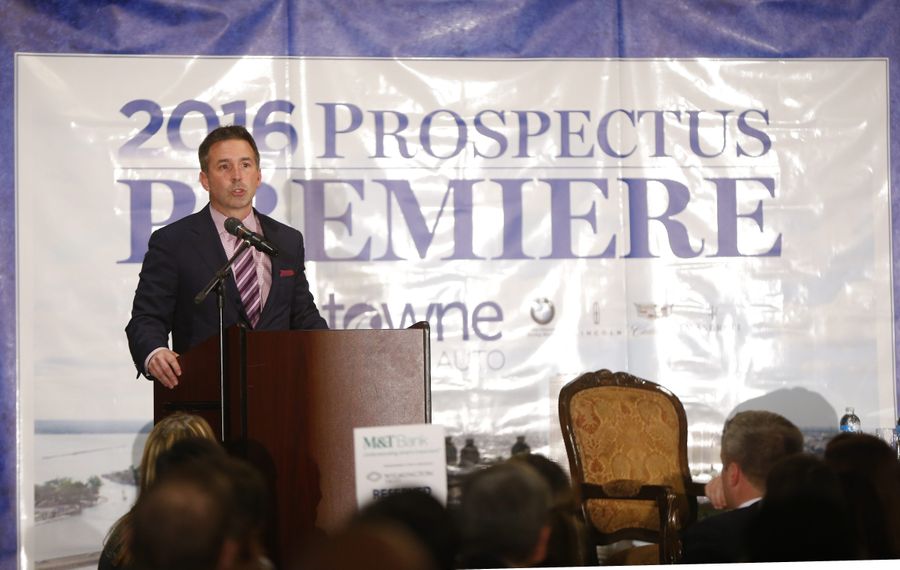 When National Football League owners met two weeks ago and approved the move of the St. Louis Rams to Los Angeles, Buffalo Bills President Russ Brandon couldn’t help but think about how close the Bills came to being the team that was moving to the nation’s No. 2 market.

“I can promise you this, there wasn’t an owner in the room who didn’t think that the Buffalo Bills wouldn’t have been part of that equation,” Brandon said Thursday during the Prospectus Premiere event at Salvatore’s Italian Gardens sponsored by The Buffalo News.

That it was the Rams – and possibly the San Diego Chargers – that were looking to move to Los Angeles shows how the team’s future in Buffalo has solidified under owners Terry and Kim Pegula, who also own the Buffalo Sabres and built the HarborCenter hotel and athletic complex next to First Niagara Center, Brandon said.

“We took the anvil off our collective shoulders about the future of the Buffalo Bills and threw it in the bottom of Lake Erie,” he said.

But while the Bills have built a season ticket base of 60,000 and the Sabres have cut off season ticket sales at 16,000, the long-term fate of the Bills still could hinge on the state of Ralph Wilson Stadium, which completed a $130 million renovation two years ago and will be the Bills’ home for the eight years remaining on the team’s lease.

Will the Bills seek a new stadium when the lease expires? Could the community afford it, and would taxpayers be willing to help fund it? Or, will the team accept another less expensive renovation project at Ralph Wilson Stadium?

Brandon said it’s too early to say what will happen with the stadium.

“It needs to make sense for our community and it has to have a macro appeal to our fan base,” he said. “We also have to be practical as we move forward.”

“We are still working through the renovations of Ralph Wilson Stadium,” he said. “We think that renovation will serve us very well.”

“There’s a lot of speculation,” Brandon said. “We are working on Ralph Wilson Stadium and Ralph Wison Stadium only for the time being”

• He said the Sabres are interested in hosting another Winter Classic outdoor game.

But Brandon also said it is too soon to say if one could be staged in 2018, when the World Junior hockey championship will be held in Buffalo and include an outdoor game, likely between the United States and Canada, at Ralph Wilson Stadium.

With an outdoor rink already in place, adding an outdoor winter game would seem to be fairly simple logistically.

Brandon said it’s not that simple.

“There are a lot of moving parts, including the NHL schedule,” he said. “The NHL knows that we’re very interested in having another one in the very near future.”

• Brandon said he would be interested in bringing professional basketball back to Buffalo, possibly by hosting pre-season NBA games at First Niagara Center.

• Brandon said the Buffalo Niagara region has made great progress, with developments like HarborCenter and Canalside that have created a buzz that the community is shaking off its Rust Belt doldrums.

“There has never been a better time to be a Buffalonian,” he” said.

“Buffalo certainly is on the rise and it is because of the all-in cohesive leadership” of the public and private sectors, Brandon said. “The momentum in Buffalo is real.”