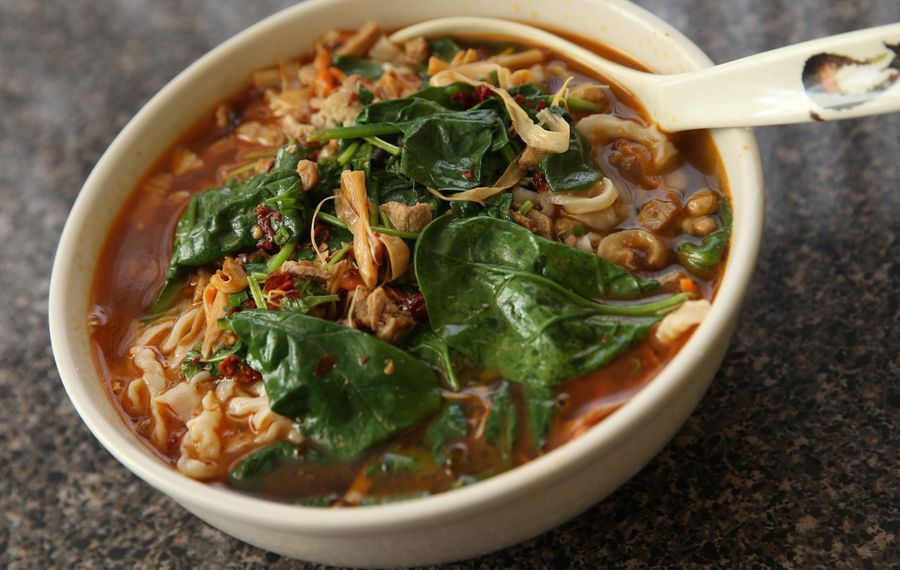 Home Taste is the most far-flung star in the constellation of new Chinese restaurants arrayed around the University at Buffalo’s Amherst campus. Its generic Kenmore storefront offers no clue to its unique character. Home Taste is the only Chinese restaurant in town with a broad menu entirely devoid of Americanized Chinese. There is no fried rice or lo mein, no appearances from General Tso and his army of sugar-glazed allies. Home Taste is a family restaurant aimed at Chinese families and students yearning for a taste of home. It offers the rest of us plenty of reasons to visit, though, from the best Chinese dumplings in Buffalo to housemade noodles and bread. ¶ What kind of Chinese restaurant makes bread? Northern Chinese restaurants do, reflecting a region of that vast nation where potatoes trump rice. Surrounded by Chinese students, you can learn something about China there.

Here’s what it does not do: Take credit cards. Automatically serve rice with dishes, or free cold water (hot water and tea bags are gratis).

Dumplings lead the way for the wary. Home Taste makes its own wrappers, tender yet resilient, like the housemade pasta they are. Besides pork and cabbage (12 for $6 fried, $5.50 steamed), there’s pork with celery, chicken with leek, fish with leek, and my favorite, pork with leek and shrimp ($10/$9.50). They are plump, fresh, and the best in town.

Soups like cucumber eggdrop, with slices of crunchy vegetable and scrambled-egg clouds ($5.50) are placidly mild as well. Egg omelet with minced pork ($8.50) would fit right in at a diner, next to some home fries. Spare ribs with onions and leeks ($10) was chunks of bone-in pork ribs coated in seasoned salt, fried to a crisp and tossed in a smoky wok with leeks, onions, and chunks of ginger. Chinese people don’t mind bones, and we gnawed along, polishing off the platter swiftly.

Then there’s the bread. Home Taste gives wheat dough a workout with leavened pancake ($3.50), a scallion-and-sesame speckled thicker version of scallion pancake, and steamed buns (four for $5), a Chinese analog to the fast-food hamburger. Inside the fist-sized white, puffy dough is a disc of seasoned ground pork much like the dumpling filling. There’s also steamed twisted roll (four for $5), which is plain fresh bread, meant to be dunked into a soup or stew.

The dough parade continues into housemade noodles, available in saucy and spicy versions, and not, namely No. 19 ($8.50), a mix-it-yourself plate of plain noodles with matchsticked carrot, celery and bean sprouts with a bowl of salty bean sauce with ground pork, so you can decide how much sauce you want.

Housemade pasta serves as the foundation of No. 45, chicken stew with potatoes and carrots, served on a bed of wide pasta that picks up the brown gravy well. At $18 it’s the most expensive dish, but it serves three or four. The chicken has been hacked with a cleaver, so there’s bone bits, but you shouldn’t wolf your food anyway. It’s been braised with cumin, star anise, ginger and chiles, giving it a vaguely Indian aspect, signaling roots in northwest China’s Xianjiang, neighboring India.

Avoid the red chile pods and you may still encounter a tingly sensation on your tongue from time to time. That’s courtesy of Sichuan pepper, a spice that turns up in No. 45 and a few other Home Taste stews. It can be mildly numbing, or tickle like soda bubbles, nothing painful.

The saucy and spicy pasta choices include my favorite Home Taste noodle, Qishan minced pork ($8.50). It’s noodles in a bit of spicy chile-laced broth, tangy with vinegar, and a jumble of vegetables. Braised Napa cabbage with pork ($8.50) is a spicy cauldron with bean thread noodles underneath cabbage, bean sprouts, sliced pork, chile and a layer of chile oil. (That’s one of several dishes from which pork can be omitted, but vegans and vegetarians should confirm ingredients with their server before ordering.)

The adventurous can lose themselves in alien foodscapes. They can learn how tasty pig feet can be (courtesy of pork feet with fried tofu, No. 46), or encounter the “thousand-year egg,” a preserved hardboiled egg with black yolks, whites gone clear like aspic, in a salad of tofu, cucumber and chopped preserved egg, with chile oil and cilantro.

There’s more common ground in the cold dishes section, with non-scary – and vegan – dishes like shredded potatoes with garlic and chile ($4.50), marinated celery with dried tofu ($4), and cucumbers with garlic and cilantro ($5). Then there’s the sautéed assorted gluten salad, which mixes marinated wheat gluten with mushrooms, peanuts and bamboo shoots for a tasty dish that looks alien enough for the Mos Eisley Cantina.

My favorite cold dish of all is scallion chicken ($7.50). It’s bone-in poached chicken hacked up and presented in chile oil and seasoned soy sauce and a scattering of scallions. Simple and delicious.

Whether you’re just looking for dumplings, or a walk on the wild side, Home Taste can hit the spot. Don’t bother looking for the usual American Chinese standards, though. General Tso has left the building.